How Does The NBA Play-In Work? 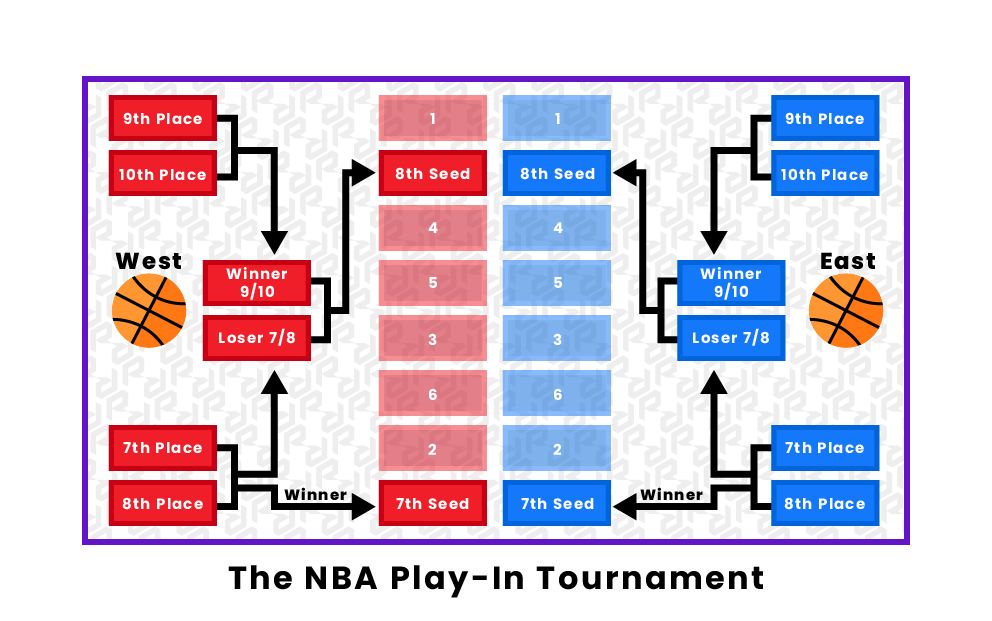 History of the Play-In Tournament

The NBA Play-In Tournament is a relatively new concept, with the current format first being held in the 2021 playoffs, but there was a similar model to the play-in tournament held during the 2020 playoffs that was played entirely in Orlando due to the COVID-19 pandemic. Under the current format, the first play-in game was held on May 18, 2021, when the Indianapolis Pacers defeated the Charlotte Hornets 144-117 in the Eastern Conference nine-versus-ten game. The Pacers went on to lose to the Washington Wizards in the next game, and the Wizards earned the eight-seed in the Eastern Conference playoffs. The higher seed won each game in the first play-in tournament, so the playoff seeding existed the same way it would have if there was no play-in tournament.

The first play-in tournament games are played between the seven and eight seed, with the seven seed at home and the nine and ten seeds with the number nine seed at home. The winner of the seven-versus-eight game earns the seven seed in their respective conference and will play the two seed in the first round of the playoffs. The loser of this game has one more chance to earn a playoff spot, but they have to face the winner of the nine-versus-ten game. In the nine-versus-ten game, the loser is automatically eliminated from playoff contention, and the winner has to face the loser of the seven-versus-eight game in order to earn a spot in the playoffs.

For example, if the 8th best team defeated the 7th best team in the first play-in game, then the 8th team earns the seven-seed for the playoffs, and the 7th team has to play against the winner of the nine-versus-ten game. In this example, the nine-seed hypothetically defeats the ten-seed, and, therefore the nine-seed has to play against the seven-seed on the road. The winner of this seven-versus-nine game earns the final playoff spot in their conference, and the loser is eliminated. Unlike the playoffs, these games are not played in series’, and there is only one game to determine the winner of each matchup.

Function of the Play-In Tournament

Essentially, the play-in tournament exists to promote competitiveness in the NBA. The NBA has tried many different ways to curb tanking or intentionally losing games in order to receive a better draft pick. One way the NBA has done this is through the draft lottery, where no team is guaranteed a certain draft pick regardless of how bad their record is during the regular season. Through the play-in tournament, 20 of the 30 teams, or 67% of the league, play postseason basketball of some sort, which means they technically have the opportunity to win a championship, although the lowest seed to ever win the NBA Finals were six-seed Houston Rockets in 1995. Due to the play-in tournament, the NBA wants fewer teams to tank and more teams to be competitive since a majority of the league will have an opportunity to win a championship.

Teams that would have had virtually no opportunity to reach the playoffs otherwise have an opportunity under the play-in format. For example, in the 2021-2022 season, the New Orleans Pelicans began the season by losing 12 of their first 13 games and finished the season 36-46 as the nine-seed in the Western Conference. Without a play-in tournament, the Pelicans would not be close to making the playoffs, but after defeating the San Antonio Spurs in the nine-versus-ten game, they have an opportunity to play the Phoenix Suns in the playoffs with a victory over the Los Angeles Clippers in the win or go home eight-versus-nine game. Without the play-in tournament, the Pelicans would likely not have tried to compete for a playoff spot, and they likely would not have acquired star player CJ McCollum from the Portland Trail Blazers at the trade deadline.

Pages Related to How Does The NBA Play-In Work?