There are multiple ways that kids can have fun with a basketball and a hoop without playing an actual game. Kids playing in their yard or at a park may not have enough players for a scrimmage and must be creative in creating competition. There is a large variety of mini games that are played instead. Even if they are usually played by kids, they can be enjoyed by people of all ages.

Around the world is a laidback shooting game from multiple places around the court. The object of Around The World is to go around the court (or around the world if you use your imagination) and make consecutive shots. Only one ball is needed. There are many variations of this game, some involve a requirement of each player to make a layup to begin and end the game. Other versions of the game include making a jump shot from five or six agreed locations on the court. If you miss one, you may have to stay in that place while the other players have their turn, or go back to the very first shot and restart.

The most common iteration involves players circling the paint, making shots from the free throw blocks and elbows.

A version of knockout exists where players can come back into the game if the player who got them out gets out. This requires the winning player to have gotten every single person in the game out before he is victorious. This version can take a much longer time per round. 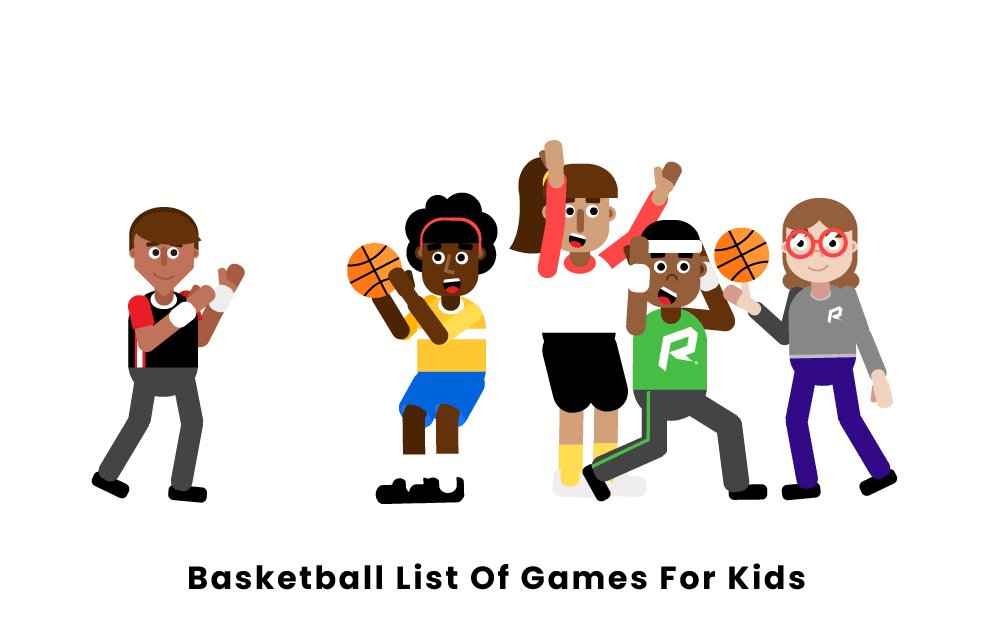 Firing Squad is very similar to Around The World, however, all players shoot from one spot at the same time, so make sure each player has his own ball. The last one to make the shot loses that round. You can move around to different locations on the court to make the shots easier or more challenging. In short, firing squad has players shoot at the same time trying to not be the last person to make a basket.

Don't be the last person to make a basket when the music stops! Musical Basketballs is a great game for little kids. Put as many basketballs in the center of the court as there are players and be sure to have a source of music. Have the players circle around the basketballs as the music plays. When someone pauses the music, each player has to grab a basketball and go dribble to a hoop and make a shot. This is a great way to incorporate shooting skills into a game. The last player to make a shot is eliminated. Keep playing until there is a winner declared.

Players gain points from each location they shoot from, but the more shots the more points you get- but the lowest score wins. Establish multiple shooting locations across the court (you could choose 18 if you really want to follow the rules of golf) and make sure each player has a ball. If the player makes their first shot, that player receives one point and moves on to the next location. If the ball doesn't go in, that player runs to get the ball and shoots from wherever they end up. If they make that shot, they get two points. If not, the number continues to increase as shot attempts are made. Whoever has the lowest score after everyone goes through all of the shot locations is the winner.

Horse is a common game involving trick shots. Each player takes turns attempting a shot. If the shot goes in, then the other players in the game have to attempt it as well. If they miss then they are given a letter, H. Once a player has all the letters in horse, they are out. The last player standing without a completed word is the winner.

Make as many shots before the buzzer goes off and beat your opponents. Pick a shooting location on the court, depending on the age group of players, and set a timer for 10 seconds. Each player gets the opportunity to shoot nonstop for those 10 seconds, so be sure to have enough basketballs. Whichever player has the highest score at the end of the 10 seconds wins the round. To make each round more difficult, move around to different places on the court, making some locations easier and some harder. The closer to the basket, the closer the game will be.

Dribble as fast as you can from one end of the court to the other so your team can finish first. This is the perfect game to play if you have a lot of players, and you only need two basketballs. Split your team members into two even lines at one end of the court and give each team one basketball. Have the first two members of each team dribble down to the other side of the court as fast as they can and pass the ball to the next team member. If he loses control of the ball, he has to start over, which will put his team behind. Whichever team completes the race first wins the game!

An added challenge to a relay race could be making every player make a layup before handing the ball off to the next runner.

Pages Related To Basketball List Of Games For Kids