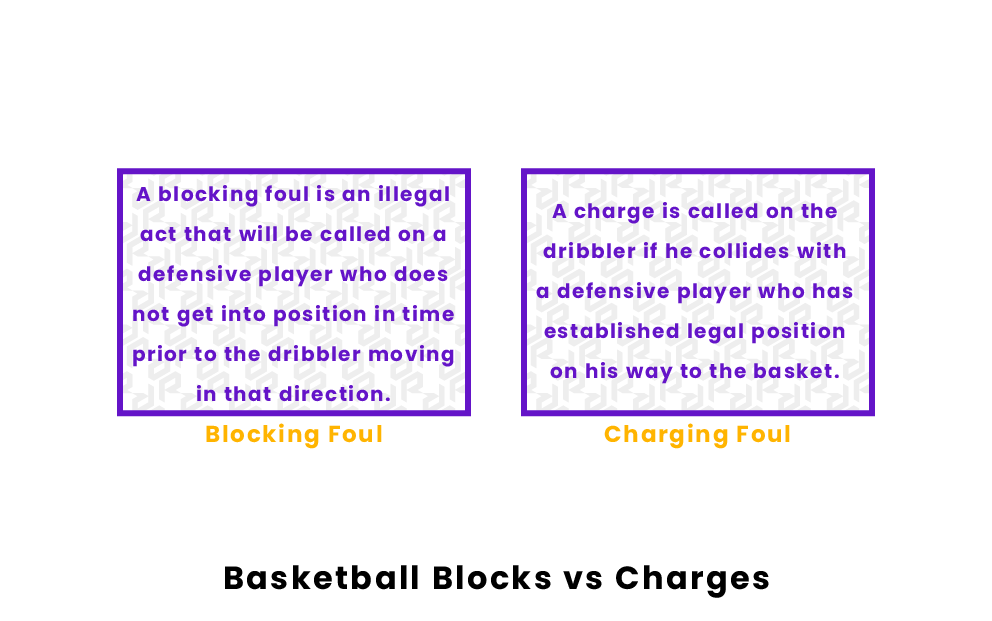 One of the most controversial and highly debated calls in basketball is the determining if it was a block or charge.

A blocking foul is an illegal act that will be called on a defensive player who does not get into position in time prior to the dribbler moving in that direction.

The referee will use the dribbler's speed to determine how much space on the court the defensive player needed to make prior to setting up the screen.

Blocking fouls result in free throws for the fouled player.

A charge is called on the dribbler if he collides with a defensive player who has established a legal position on his way to the basket.

Legal position entails feet set and the torso in between the offensive player and the basket. The defending player can not be in the act of shuffling into this position, as they must be set prior to the contact. This is the hardest real-time differentiation for referees to see when making the call.

Charges are huge momentum builders for a team as it is not only a turnover but a foul on the offensive player.

Defensive players will often flop to draw a charging call, meaning they will over exaggerate the amount of contact they received when falling to the ground. The goal is to make the offensive player look guilty for committing a charge.

The restricted area in a component of the court that defensive players are not allowed to stand in when taking a charge. If a player's feet are on the line then it is automatically considered a blocking foul.

When excessive or forceful contact happens between an offensive and defensive player, the referee is given two options. They can either call a charging foul or a blocking foul.

Several factors go into the deciding of what the call will be a charging foul.

Was the defender positioned on the court prior to the dribbler making contact?

Was the defender in the restricted area when contact was made?

When looking for a block or charge, make sure the defender had his torso in front of the dribbler prior to the collision. The defender must also be in position before the dribbler is moving the ball toward the basket.