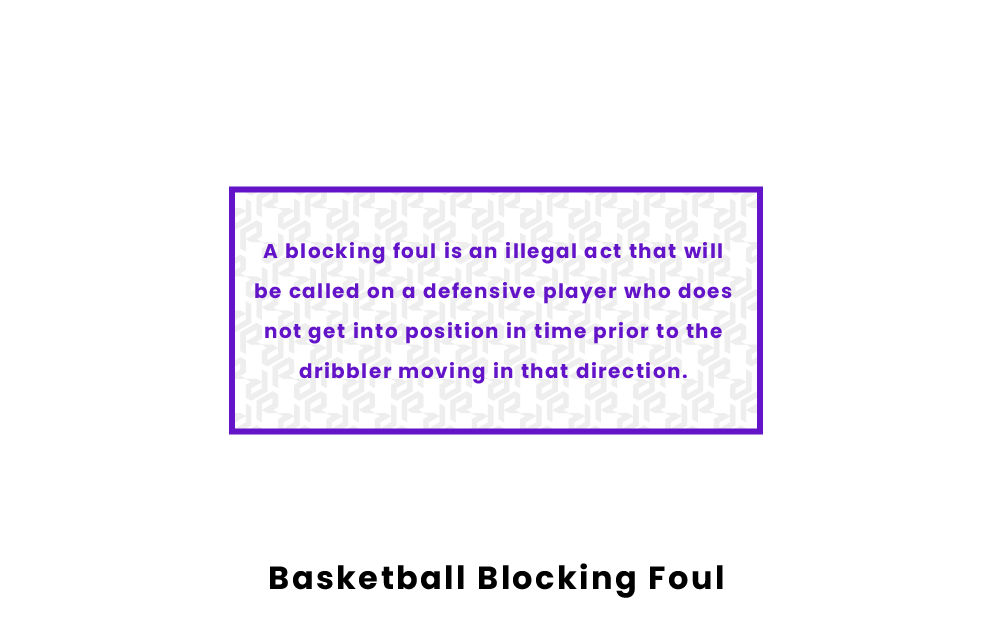 A blocking foul in basketball is a foul assessed to a defensive player who is not properly positioned and makes contact with an offensive player to stop their movement. If the defensive player is still moving, does not have his feet planted, or has not established themselves within the ball handler's path before the two players collide, a blocking foul against the defender will be called.

A blocking foul will result in the ball being taken out of bounds or free throws, depending on if the team is in the bonus. Frequently, one or both players are knocked backwards or to the ground when a blocking foul occurs, making it easy to tell when the foul should be assessed. However, the difficulty is distinguishing between the foul being called a block or a charge.

The opposite of a blocking foul is a charging foul assessed to an offensive player. Blocking fouls often occur as a result of the defense attempting to take a charge but not getting to the proper position in time. Charging fouls occur when the offensive play makes excessive contact with a defender who is properly set. The defining factor between a blocking foul and a charging foul is whether or not the defender had proper timing and positioning before the contact was made.

The restricted zone is an area of the court used in NBA and NCAA basketball in which charging fouls cannot be called. In other words, the defensive player must be outside of this zone or else they will be called for a blocking foul. It is common for blocking fouls to occur in this zone. The restricted zone is marked by a small half circle measuring about 4 feet placed underneath the rims. This zone is present to provide an advantage to the offensive players and prevent excessive attempts to receive charging calls near the basket.

Keep in mind, the restricted zone is not present in high school basketball.