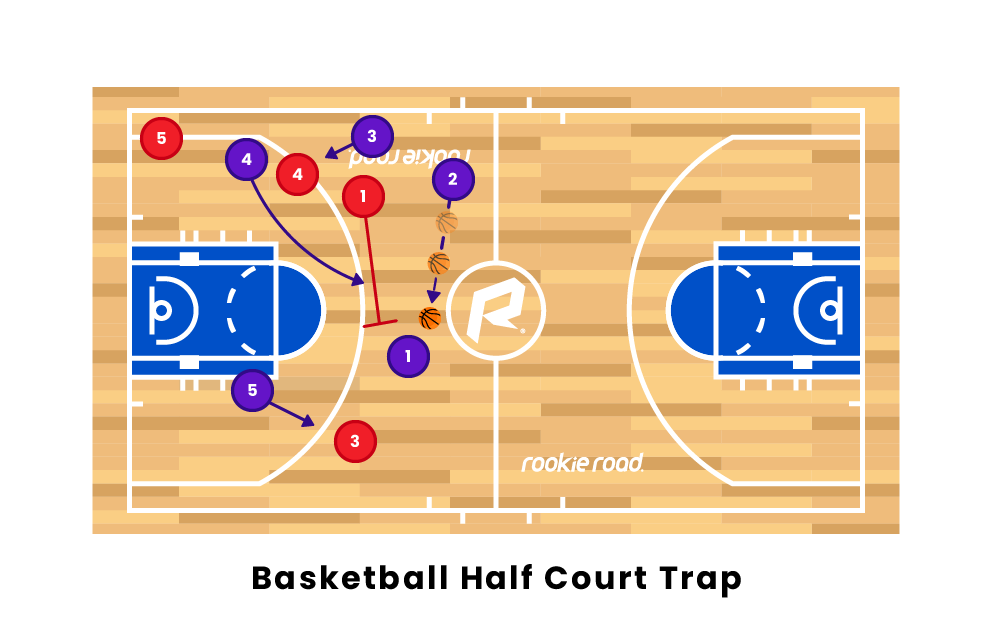 The Basics of a Half Court Trap

A half court trap style of defense is similar in some ways to a half court press or a full court press, although the general goal is different. A trapping style of defense is solely focused on forcing traps and turnovers whereas a press is looking to up the tempo of the game while also maybe forcing some turnovers. There are multiple different alignments and styles of half court traps, but they all have the same goal of forcing as many traps and as many turnovers as possible once the ball comes over the half court line.

Strengths of a Half Court Trap

A half court trap has two main strengths: forcing turnovers and slowing the game down. A trap is designed to force bad passes and clog passing lanes more so than an average defense, which if done effectively, will lead to many more turnovers than usual. Trapping above the three point line and disrupting the ball handler can also force the offense to take longer amounts of time tying into the second strength. A team can start trapping if they want to slow an offense down that likes to get out and play very fast.

Weaknesses of a Half Court Trap

A half court trap can lead to some disadvantages if the offense can exploit the weaknesses in the defense. If good ball reversals can keep players out of a trap, then the defense will be unable to remain in good position allowing for good shots to be taken from all over the court. Besides this, if a defense stays with a trapping style for a long stretch of time and gives up some points, they are burning lots of time off the clock which can affect their chances of coming back from a deficit of any kind to win. All in all, a half court trap can force some turnovers and slow a team down as long as it is done well.