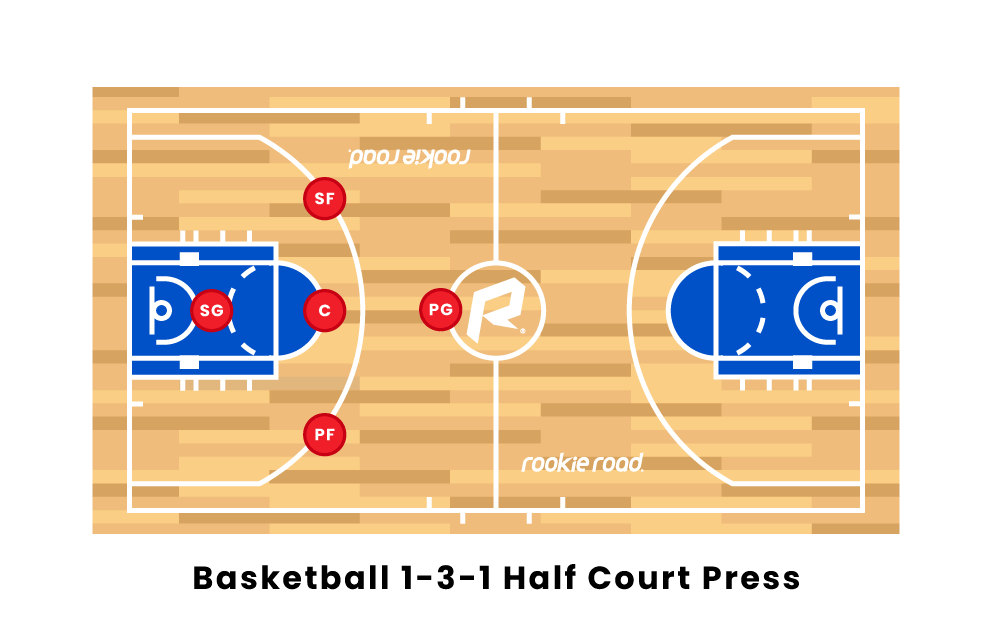 The 1-3-1 half court press is very similar to the 1-3-1 zone with some slight differences. The alignment of players is the exact same with one player usually a guard or forward playing high, 3 players below him and 1 playing in the paint area at the bottom of the zone. The roles of each individual are what changes as the top player does not look to just clog passing lanes and trap an offensive player.

He is now solely responsible for trying to force traps in the corners with the players playing below him, a much more aggressive role. The same goes for the player underneath the basket; they are now trying to force corner traps as much as possible, extending the defense a bit more than if played in a normal or less aggressive zone form.

The 1-3-1 press being more aggressive than a regular 1-3-1 zone is a high-risk, high-reward defense. It puts the offense into spots where they do not want to be and can create turnovers at a high rate if done properly. Besides just creating turnovers, the press is able to effectively speed up the tempo of the game if the team would like a tempo and momentum to shift in their direction. In general, it is effective in limiting perimeter shots as most of the ball handlers are well-guarded at or above the three point line.

The 1-3-1 press has a downside to the high aggressiveness that it enacts. If good ball movement is used by the offensive team, they will be able to neutralize the effects of the press on a fairly consistent basis creating easy and open offensive opportunities. It also leaves the defense exposed to a lack of rebounding down low as it is a very extended defense. The corners are usually open so an effective shooter can change the game from there, especially on good ball reversals before the defense can recover. All in all, the 1-3-1 half court press can change the tempo and momentum of a game if executed well.