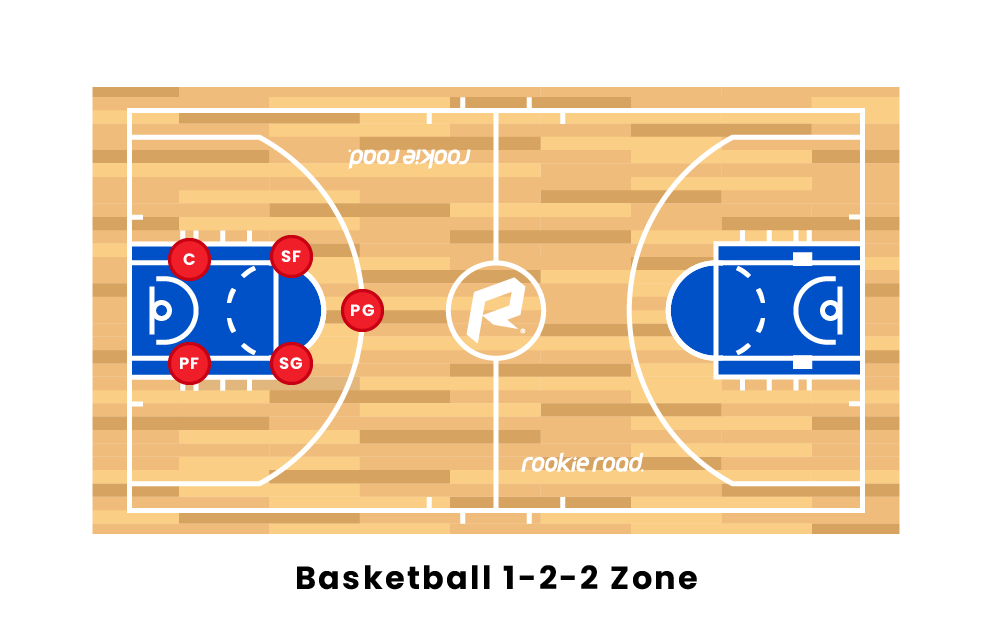 The 1-2-2 zone is a half court defense in which 1 player, usually a guard, plays high with 2 players below them, creating a triangle. Two other defensive players stay low, creating a box with the 2 playing higher. This is a fairly loose zone looking to keep players from easily getting perimeter shots. The guard at the top of the zone is playing the offensive guard close at the top of the key, unlike a 3-2 where he would sag off into the high post. The 2 players lower than him allow passes to the wing, staying close in the high post until the ball is reversed. Finally, the bottom 2 players stay close to the rim and must also contest shots in the corners too.

The 1-2-2 allows for the three point line and the perimeter to be easily guarded as well as a good amount of pressure to be applied to ball handlers. Because of the alignment, shooters can be easily contested as the 2 higher players can react to the wings more easily than in some other types of zones. It is also a good defense to find some traps and create turnovers out of. It creates good fast break opportunities as the wing players can move easily into an offensive mindset out of their positioning.

There are two main problem areas within this defense: the high post area and the corners. If the offense is able to easily move the ball into the high post, the defense cannot defend both the rim and the corners since the post players have to guard both. The corners are also areas that can be attacked with good ball movement as slower post players are responsible for guarding those areas plus the paint. It is also not the easiest defense to rebound out of, however, the transition ability makes a good rebound into an easy offensive opportunity. All in all, the 1-2-2 can be effective on the perimeter if a team is playing a team with good guards.