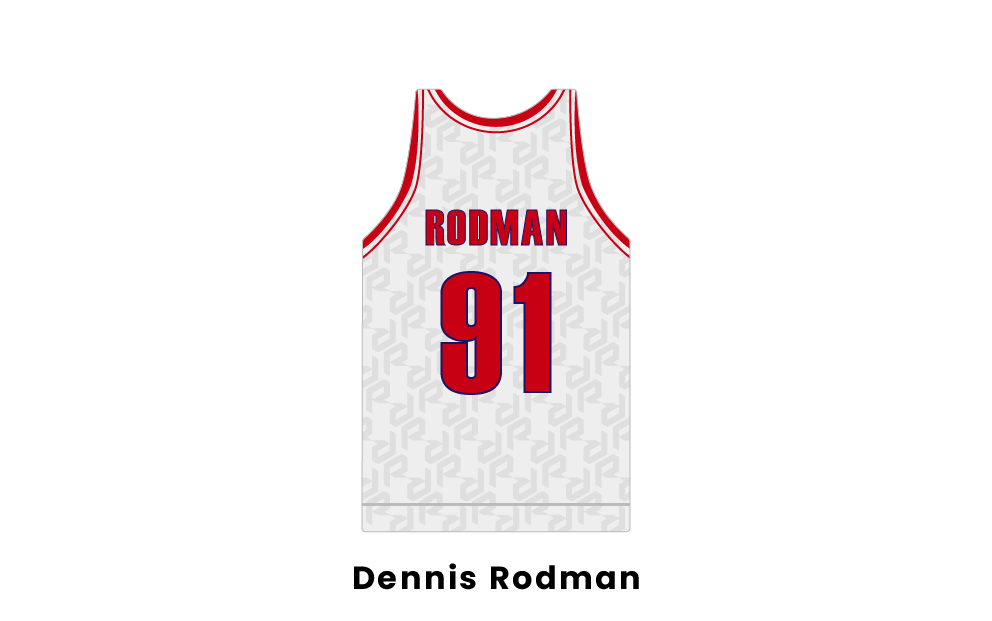 Dennis Rodman is among the biggest personalities in NBA history. The histrionic center dominated the scene in the league, winning five rings while being on the front page of many magazines for his extravagant looks and his life off the court.

The Southeastern Oklahoma State alum played 14 seasons in the NBA with the Pistons, Spurs, Bulls, Lakers, and Mavericks before taking a three-year hiatus from basketball. After a short career in the entertainment industry as a part-time wrestler and actor, Rodman went back to playing professional basketball overseas. “The Worm” played in Mexico, the UK, and the American Basketball Association before retiring in 2006.

A five-time NBA Champion, Dennis Rodman has gone down in basketball history as an extremely unselfish player who prioritized fighting for every loose ball or rebound rather than constantly asking to be passed the ball in the paint like most traditional big men.

Despite being part of some of the most legendary teams in the history of basketball, Dennis Rodman’s net worth is miles away from his former Chicago Bulls teammate, Michael Jordan, who is now a billionaire. Dennis Rodman has a net worth of $500,000, despite having made over $27 million in salary during his NBA career. A tormented private life and some investments gone wrong have contributed to the huge decrease in Rodman’s net worth.

Dennis Rodman entered the NBA as a semi-unknown prospect from the small NAIA school of Southeastern Oklahoma State and was selected by the Detroit Pistons in the second round of the 1986 NBA Draft. His grit and toughness turned out to be a perfect match with the rest of the “Bad Boys” in Detroit, as he won two NBA titles (1989, 1990) and two NBA Defensive Player of the Year awards (1990, 1991).

After seven seasons in Detroit, Rodman demanded a trade and was acquired by the Spurs, where he spent two seasons without much success. A conflicted relationship with the front office and the team led him to be traded to the Bulls in the 1995 offseason. There, he created one of the most iconic big-threes in the history of the NBA with Michael Jordan and Scottie Pippen, becoming a key player in the second three-peat in Bull’s franchise history.

The last seasons of his NBA career saw Rodman play for the Los Angeles Lakers and the Dallas Mavericks before taking a three-year break and going back to play in lower leagues in the US, while also playing for a short time in Mexico and the UK.

“The Worm” is among the most decorated big men in NBA history, winning various personal and team awards during his time with the Detroit Pistons, San Antonio Spurs, and Chicago Bulls.

In his seven years with the Pistons, Dennis Rodman won two back-to-back NBA championships in 1989 and 1990. The Texas native immediately established his defensive knowledge as he won the NBA Defensive Player of the Year Award in 1990 and 1991, while making it to the NBA All-Defensive First Team five times. Rodman also made his only two All-Star appearances in his time with the Pistons.

While only reaching an NBA All-Defensive Second Team appearance with the Spurs, Rodman went back to winning ways with the Bulls, where he was crowned NBA Champion three times and received two more NBA All-Defensive First Team selections. Dennis Rodman also led the NBA in rebounds for seven straight seasons from 1992 to 1998.

While he was dominating the paint for fourteen seasons, Dennis Rodman was constantly under the spotlight, even off the court. Despite the countless adventures that landed his face on the cover of magazines, Rodman’s journey to the NBA is a story of grit, humility, and tenacity.

Lack of physical growth and the need to help his large family economically led Rodman to quit basketball and work as a janitor after high school. A tremendous physical growth that made him grow to 6’7” tall earned him a shot at a college career, eventually leading him to the NBA.

Dennis Rodman has been married three times and divorced his latest wife in 2012. Rodman has two kids, Dennis Jr., who is currently playing college basketball at Washington State, and Trinity, who is a professional soccer player for the Washington Spirit.

Which NBA teams did Dennis Rodman play for?

Dennis Rodman played for five different NBA teams in his fourteen-year career in the league, including the Pistons, Spurs, Bulls, Lakers, and Mavericks. Drafted by the Pistons, he spent seven seasons in Detroit, winning two NBA championships and two Defensive Player of the Year Awards. In 1993, he was traded to the Spurs, where he soon developed a bad relationship with the front office, causing a trade to the Bulls in 1995. In Chicago, Rodman won three more titles and collected various personal awards. Rodman spent the last two seasons of his NBA career between the Mavericks and the Lakers without any particular success.

Is Dennis Rodman an NBA Hall of Famer?

After a career that led him to five titles and two NBA Defensive Player of the Award, Dennis Rodman was inducted into the Basketball Hall of Fame in 2011. Throughout his career, Rodman was named twice to the NBA All-Star Game and twice to the All-NBA Third Team. Rodman is also a seven-time All-NBA Defensive First Team selection and a seven-time rebounding champion. “The Worm” is also among the players named in the NBA 75th Anniversary Team.

What is Dennis Rodman doing now?

Rodman retired from professional basketball in 2006 after a brief stint with a British team, the Brighton Bears. Since the end of his playing days, Rodman has been involved in many ventures in the entertainment industry, acting in movies, wrestling alongside Hulk Hogan, and appearing in various reality shows in both the UK and US. Now, Rodman is involved in various business ventures and often travels to North Korea to meet his friend Kim Jong Un, the country’s supreme leader.