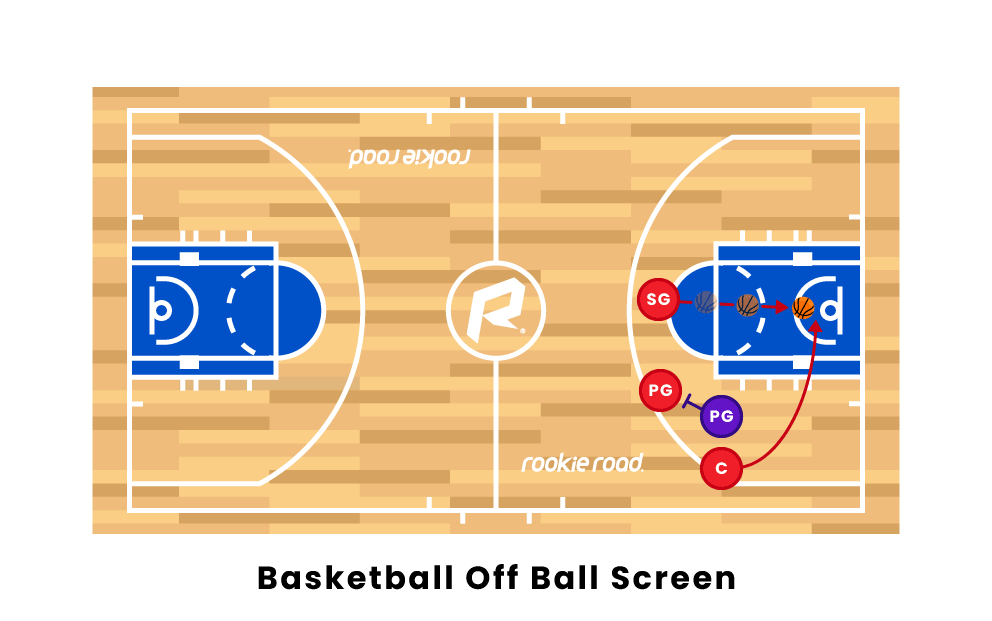 In basketball, a screen, also known as a pick, is a technique used by an offensive player. It is meant to block the path of a defender by getting in his way with the screener’s body. An off ball screen is a screen set on a defender who is not guarding the ball, used to get the screen’s receiver open. In the same way a player sets a ball screen, the screener must choose the right angle to make contact, spread his feet for a wide base, come to a complete stop, and cover him with his arms.

Numerous kinds of ball screens exist to get cutters open. The cutter will still need to read the defense to make the best decision, but many of these screens are designed to get the ball to the cutter in a specific spot.

Using An Off Ball Screen

An offensive player using an off ball screen has a few options. Each one is meant to separate the cutter from his defender as much as possible. So, the offensive player will have to read the defense to make pick the best option for the situation and create the most space.

First, he can run a straight line cut coming off the screen. This is best if the defender gets hung up on the screen and cannot make his way around it. A straight line will separate the cutter from his defender more than any other cut.

Another option for the cutter is to fade. Rather than running past or around the screener, he can get to the screener and then bounce outside to the perimeter, away from the ball. A fade works best when the defender sees the screen coming and tries to go underneath it.. By fading outside, the defender will still have to make his way past the screen to reach the offensive player.

Additionally, the cutter can use a back cut. Once he gets to the screen, he can decide against using it and simply cut back toward the basket for a layup. This cut should be used when the defender is playing especially aggressive defense and is not giving the cutter much room to move freely. If the defender attempts to go over the screen early, a back cut will take him out of the play.