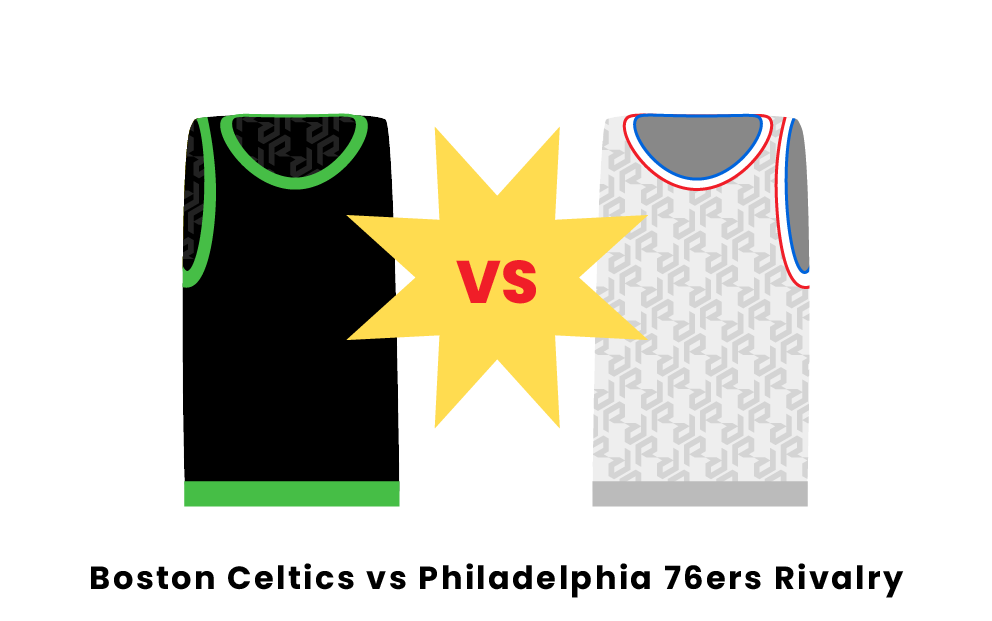 The Philadelphia 76ers and Boston Celtics rivalry is one of the most historic and notable within the NBA. From unforgettable playoff games to bad blood between players, this rivalry is not only long-standing but still filled with passion to this day.

This rivalry features two of the most storied and respected franchises in the history of the NBA, the Philadelphia 76ers and Boston Celtics. Their history against one another is legendary, spanning back to the early rivalry between Wilt Chamberlain and Bill Russell. The teams have always played with extra passion against one another and have combined to win numerous titles, constantly clashing in memorable Eastern Conference Finals series.

These teams have met numerous times in the playoffs; there have been some notable moments and games, such as when Larry Bird and "Dr. J" famously threw punches at one another during a contest at Boston Garden on November 9th, 1984. Numerous legends have participated in this rivalry, such as Larry Bird, whose shooting at the time changed the game and led the Celtics to numerous titles, and Charles Barkley, who still considers the Celtics his nemesis to this day. While varying in success in recent years, both teams still hold this rivalry with great regard. The history between these two giants of the NBA is integral to the sport's history as a whole.

Celtics at 76ers on April 12th, 1966: This game saw the Celtics win the last of 8 straight Eastern Conference titles after defeating the Sixers in five games. The Celtics beat the Lakers in seven games afterward to clinch the championship behind Bill Russell.

76ers at Celtics on May 23rd, 1982: This game saw the Philadelphia Sixers clinch their berth to the finals after defeating the Celtics behind a memorable 34-point Game 7 performance from Andrew Toney.

76ers at Celtics on May 3rd, 2002: This game was the deciding match between the two teams from a series that featured two dueling legends in Allen Iverson and Paul Pierce. This game saw Pierce drop an astonishing 46-point game to end the series.

Larry Bird, Celtics Forward from 1979-1992: "Larry Legend" is one of the Celtics greats and led them to two NBA Championships during his tenure with the team.

Julius Erving, Sixers Forward from 1981-1987: Julius "Dr. J" Irving was an icon of Philadelphia and helped win the Sixers their 1st NBA Championship.

Andrew Toney, Sixers Guard from 1980-1988: A shooting guard for the Sixers, Toney is best known for his memorable playoff performance against the Celtics in the 1980s.

Paul Pierce, Celtics Forward from 1998-2014: Paul “The Truth" Pierce was a Celtics mainstay known for his clutch buckets and scoring prowess that helped the team win the 2008 NBA Championship.

Joel Embiid, Sixers Center from 2014-Present: Joel "The Process" Embiid started his career in doubt with a lingering foot injury but nowadays is one of the best 2-way players in the league for the Sixers.

Allen Iverson, Sixers Guard from 1996-2010: Allen "A.I." Iverson was one of the most controversial players to ever step on the court; he changed the way the game is played and was with the Sixers for ten seasons.

Wilt Chamberlain, Sixers Center from 1959-1968: A Philadelphia native and Sixers hero, Wilt was one of the greatest ever to play the game. To this day, his record-setting 100-point game performance has yet to be topped.

Bill Russell, Celtics Center from 1957-1969: A pillar of the NBA, Bill Russel is one of the greatest players of all time; he led the Celtics to a jaw-dropping 11 NBA Championships during his time with the team.

Why are the Celtics and the 76ers rivals?

This rivalry exists for many reasons; the two teams have had extreme success and constantly clashed in the Eastern Conference Finals series due to both teams being powerhouses in the same conference. Along with this, the players have helped grow the rivalry over time through games that went to the wire and were played with passion. Frequent and intense matchups between the two team’s star players have also helped to fuel this rivalry over the years.

When did the rivalry between the 76ers and Celtics start?

Due to the long-standing history, the rivalry exists due to numerous events. Actions such as Larry Bird and Julius Erving throwing punches on the court at each other and the duels between Wilt and Russell in the 60s are another part of it. Other events such as the Markell Fultz trade and the 2018 Eastern Conference Finals have recently helped keep this rivalry heated and ongoing.

Are the Celtics and the 76ers the biggest rivalry in the NBA?

While one of the most storied and long-standing, the Celtics-Sixers rivalry is not the greatest in the NBA. That honor falls upon the Celtics and Los Angeles Lakers. While still respected and ongoing, the feud between Philadelphia and Boston pales compared to the great "East-West Coast'' war in which Boston and L.A. have long participated.