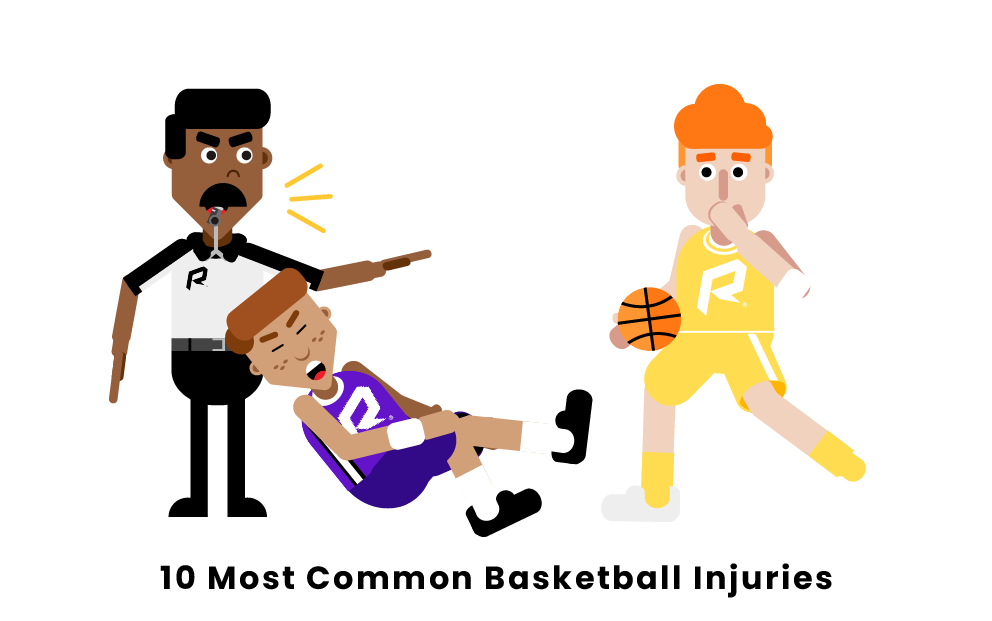 What are the most popular Basketball Injuries?

An ankle sprain is a highly common injury to occur to basketball players on the court. These injuries are very common because basketball players rely on the quickness of their feet to move around their opponent, or when they rebound the ball and land on the foot awkwardly. Ankle sprains are easy to diagnose because the impacted area on the ankle swells up significantly and dark bruises form. The injured athlete usually will hear a popping sound at the time of the ankle sprain. To avoid such injuries, basketball players wear high top shoes to give the ankle additional support, and will have their ankle taped up.

Lumbar strain is a more scientific term for lower back pain, and this injury happens to many basketball players. Lumbar strain could either happen to these athletes over time from repetitive motions jumping and rebounding, or from a sudden impact and falling on one's back. Many athletes still play with lower back pain, but if the pain worsens, then the player may have to undergo surgery. Treatment for this injury involves rest, icing the area, and possibly wearing a back brace to compress the muscles together.

A popular injury among basketball players, a hamstring strain is a painful injury to endure. Hamstring strains are caused by a tear or pull in the three muscles of the hamstring, and it occurs often in activities involving sprinting and sudden stopping movements, such as basketball. Furthermore, these players run on hardwood floors, which adds to the impact and exertion on the player's hamstrings. To heal a hamstring strain, most athletes will rest and ice the muscle. If the player plays through the pain, it could damage the muscle even more, possibly needing surgery to repair it.

Many basketball players are injured with a knee sprain in the sport relatively often. Knee sprains are injuries that involve overstretching the ligaments that connect the bones of the knee. This overstretching is damaging and can be caused by excessive pressure put on the knees from jumping and rebounding, or from a sudden impact, such as falling on one's knees. This injury is not as severe as a torn ACL (Anterior Cruciate Ligament); however, if a knee sprain is not treated and healed properly, then constant injuries to the knee can make the ligament tear.

Contusions are incredibly popular to receive in the game of basketball. In such a physical contact sport with a large dense ball as the primary piece of equipment, it comes to no surprise that many basketball players have one or more contusions on their body. A contusion is the medical name for bruising. Many basketball players are bruised from falling from a high jump, whether that is missing the rim or being blocked by an opponent in the air, or from being accidentally kneed by an opposing player.

Injuring a finger, or multiple fingers, is incredibly common in the game of basketball. It is very important for players to handle the ball correctly; most players accidentally jam their fingers on the ball. This blunt force from the basketball specifically causes an injury to the proximal interphalangeal joint, also known as PIP. Finger sprains are more commonly known in the basketball community as a jammed finger. The injury will usually make the finger swollen, and hand to bend the joints.

Getting a shin splint injury is not an enjoyable time for basketball players on the court. This injury causes pain on the front of the lower leg (the shin) and makes it very uncomfortable for athletes to run and be agile. Shin splints is the commonly used term; however, the medical term for this injury is the tibial stress syndrome. They occur most often from excessive running and overuse of the shin bone. Shin splints can also occur if an athlete is wearing improper footwear, or if the footwear is not padded enough for a flat-footed athlete. Most athletes suffering with shin splints usually rest their legs and the discomfort will go away.

Broken noses are not unheard of in the world of basketball. A broken nose is a break or crack in the bone over the bridge of the nose. It is also called a nasal fracture, and they cause swelling and bruising around the nose and under the eyes, as well as pain. This injury is common among basketball players because this sport is a physical contact sport, with hands and arms wavering around constantly. Oftentimes when this injury occurs, the players are near the net, either trying to defend the net or to score the ball, and in very close quarters of one another. An elbow to an athlete's face and hitting the nose causing a broken nose is common. When this does occur, most players are recommended to wear protective face masks to avoid this injury again.

Facial cuts are another common injury that basketball players suffer from from time to time on the court. Similarly to receiving a broken nose, basketball players get facial cuts when one or more opponents are very close to an athlete and the ball is above all the players' heads, causing arms and hands to be reaching above. When the arms drop, they may come in contact with another athlete's face on accident, and due to the force and angle of the arms dropping, may cause someone to be cut or elbowed. Many players will still continue to play after receiving temporary stitches to hold the cut in place, but this could be more severe if the elbow hit an eye, the forehead, or the nose. Basketball players now have decided to incorporate wearing protective face masks to avoid these injuries.

A popular injury among all sports, a tear in the ACL can bring severe pain to the athlete and may put their career on hold, or worse, permanently. An ACL tear is a tear in a ligament in the knee, the Anterior Cruciate Ligament. This injury is caused usually by an intense, sudden blow to the knee. This injury is particularly common in basketball because players are jumping to grab possession of the ballr, and landing on hardwood. Any awkward land to the knees could cause this injury. An ACL tear requires many weeks of rehabilitation before an athlete can return to the court.