Which MLB Teams Have Never Won A World Series? 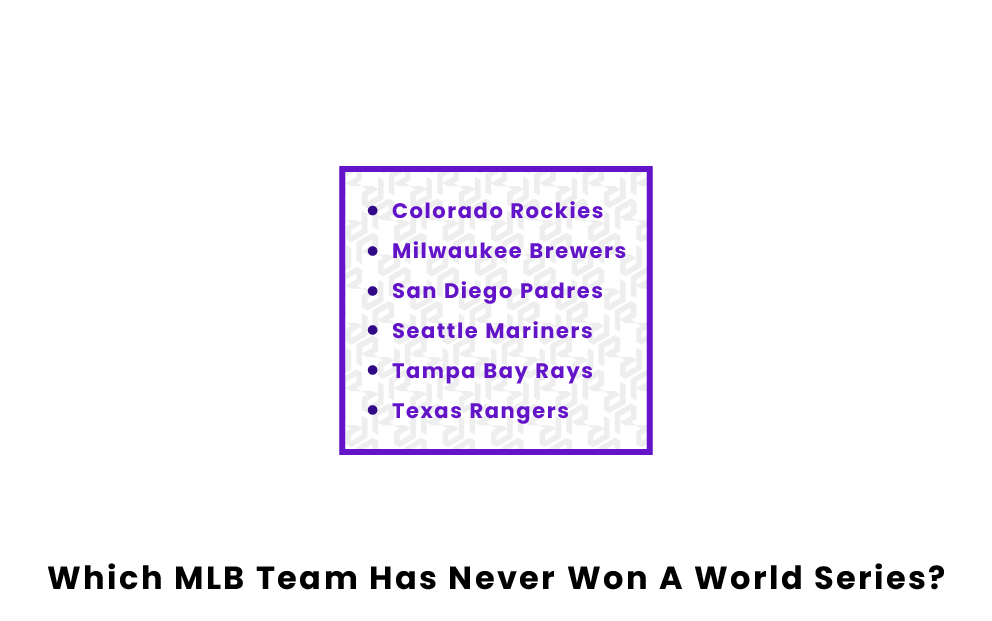 The MLB season is one of the most grueling in sports, with teams fighting for 162 games just to make it to the postseason. Even with a playoff field that has expanded twice in the past decade, Major League Baseball is still the professional sports league that has the lowest percentage share of teams that make the postseason. Once there, most clubs have to advance through three rounds of play before reaching the World Series. While some organizations are known for their tremendous championship totals, others have never felt the glory of winning it all. Keep reading below to learn more about the teams that have never won a World Series.

Which MLB Teams have never won a World Series before?

Founded in 1991, the Rockies have not had very much postseason success to write home about. They did make it to the World Series in 2004 against the Boston Red Sox, but they were promptly swept in four games. In fact, since 2009, the Rockies have not even won a playoff game, making it past the regular season just twice in that span.

The Brewers came extremely close to winning their first World Series in 1982 when they took a 3-2 lead over the St. Louis Cardinals, but they lost Games 6 and 7 to drop the championship. After that loss, Milwaukee did not get back to the postseason for another 26 years, one of the longest droughts in modern sports history. They have reached the playoffs in each of the last four seasons, but the furthest they advanced was the National League Championship Series in 2018, when they lost in seven games to the Los Angeles Dodgers.

In the first 26 years of the franchise’s existence, they made the postseason just once. That appearance came in 1984 when they went all the way to the World Series, but they came up short, losing in five games to the Detroit Tigers. The club proceeded to only make it to the playoffs once in the next thirteen seasons, but in 1998 they made it back to the World Series to face the New York Yankees. Unfortunately, San Diego was swept, and they have not been back since. In the past sixteen seasons, they have made the playoffs just once, getting swept in 2020 by the Los Angeles Dodgers.

The Mariners are currently owners of the longest postseason drought in Major League Baseball, having not made the playoffs since 2001. That year, Seattle set a record for the most wins in league history with 116, but they were eliminated in the American League Championship Series by the New York Yankees. Seattle has made it to the ALCS three times in franchise history but has never won. In total, the organization has made the postseason four times since its inception in 1977, with all four appearances coming from 1995-2001.

The youngest team on this list, the Rays, have actually had a fair amount of postseason success since being added to the league in 1998. Their first playoff appearance came in 2008 when they won 97 games and went all the way to the World Series. They dropped the matchup in five games to the Philadelphia Phillies, but they returned to the playoffs three times in the next five years. In 2020 the team made it back to the World Series to face the Los Angeles Dodgers, but they lost the series in six games.

The Rangers likely have the most painful postseason history to look back on when considering that they have never won a ring. The franchise got off to a rocky start after joining as the Washington Senators back in 1961, failing to reach the postseason until 1996. They would go to the American League Division Series three times in the next four years but never made it past that round.

However, the team got its big break in 2010, advancing all the way to the World Series. They lost to the San Francisco Giants in five games, but they weren’t done there. Texas made it back to the World Series the following year, looking to win their first-ever championship against the St. Louis Cardinals. They came so close, taking a 3-2 lead into game six. However, a costly misplay by right fielder Nelson Cruz in the ninth inning allowed the Cardinals to tie the game, and they went on to win in extra innings. St. Louis also won game seven, squashing the Ranger’s World Series hopes. The team has not advanced past the ALDS since then.

Pages Related to Which MLB Teams Have Never Won A World Series?