What Was The Best And Worst Performances By An MLB Team Ever In A Season? 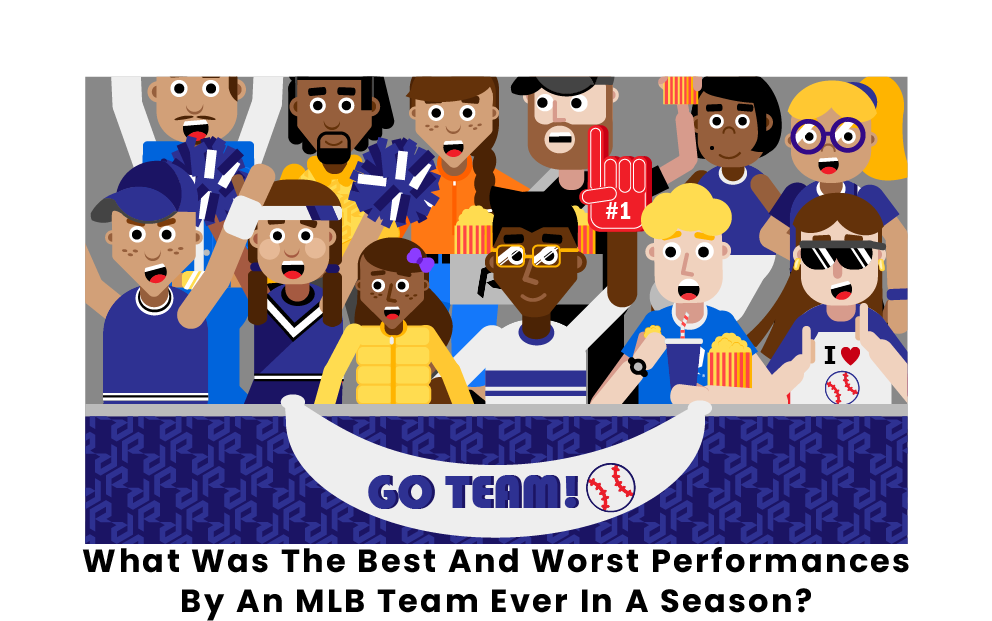 Baseball fans across America and the world follow their favorite major league teams every year, debating statistics and records, but what was the best performance by an MLB team ever in one season, and which team has the record for the worst performance in a season? Here, we take a look at two of the all-time records in MLB history, the team with the best record and the team with the worst.

How the MLB Season Works

In order to get a sense of how good or bad the average MLB team is, we should take a look at how the MLB regular season is structured, as the system of gameplay can seem complex to some fans initially. Simply put, the regular MLB season traditionally consists of 162 games per team and typically lasts from the first Sunday in April to the first Sunday in October. The MLB has 30 total teams divided into two leagues of 15 teams each, the National League and the American League. These two leagues are further separated into three divisions, each with five teams each. Traditionally, every team in the MLB plays most of their regular season games against teams from their league, the National or American League. However, there are usually two stretches of interleague games during the season.

Keeping this breakdown in mind, it becomes obvious that the MLB teams with the best and worst records must either win or lose a very large number of games. Since there are so many games in a season, it is very difficult to attain a near-perfect record, but this also makes it very unlikely that a team will have a completely abysmal record as well. MLB teams are typically judged by their winning percentage, with a .700 winning percentage being one of the highest goals in baseball, achieved by winning 70% of their regular season games.

Since the inauguration of the MLB, the best record ever reached by any team has been a win record of 116 games. Interestingly, this record has been set twice in MLB history by two teams set over 100 years apart. The first team to win 116 games were the Chicago Cubs in 1906. Led by first baseman Frank Chance, catcher John Kling, and third baseman Harry Steinfeldt, the 1906 Cubs accumulated a 116-36-2 record, leading the majors in runs scored (at 4.6 per game) and runs allowed (at 2.5 per game). By the end of the season, the Cubs had racked up an astonishing .731 winning percentage, the highest since 1900. However, despite their stellar record and a first-place finish in the league, the 1906 Cubs went on to lose that year’s World Series to the Chicago White Sox in six games.

The second team to achieve an all-time wins record of 116 games was the 2001 Seattle Mariners. Led by star outfielder Ichiro Suzuki, a rookie from Japan, the 2001 Mariners led the MLB in eight different categories: average runs per game (5.72), runs-batted-in (881), bases stolen (174), on-base percentage (.360), average runs allowed per game (3.87), earned run average (3.54), shutouts (14), and fewest hits allowed (1,293). Ichiro Suzuki was a major force behind many of these records, accumulating an individual batting average of .350, scoring 242 hits, and stealing 56 bases. These accolades led Suzuki to win the AL Rookie of the Year Award and League MVP. With a total record of 116-46, their winning percentage was .716, in the Top 5 MLB winning percentages of all time. However, much like the 1906 Cubs, the Mariners were ultimately upset in the postseason, losing the ALCS to the New York Yankees in five games.

While it is incredibly difficult to achieve a .700 winning percentage in baseball, it may be even more difficult to match the incredible losing record of the 1899 Cleveland Spiders, who are considered by many to be the worst baseball team of all time. In 1899, the Spiders were playing their 13th and final season as a team, as the team’s owners had just secured the purchase of another team, the St. Louis Browns (who would later become the St. Louis Cardinals). In their final season, the Cleveland Spiders won only 20 games, racking up an unbelievable 101 road losses in a total loss record of 20-134. Unsurprisingly, their winning percentage was an abysmal .130, and their road loss record of 101 is unbreakable by today’s standards, as MLB teams no longer play that many games on the road. In fact, the Cleveland Spiders were so poor that other teams in the National League refused to travel to play them because the low attendance at their games barely brought in enough revenue to cover hotel expenses. By far, the 1899 Spiders have the worst record in the history of any MLB team, and it does not look like that record will be broken anytime soon.

In a sport where statistics matter as much as they do in baseball, knowing which teams have had the best and worst overall performances in a season is definitely a key bit of knowledge. While fans of the current MLB teams may not ever reach the heights of winning teams like the 2001 Mariners or the 1906 Cubs, at the very least, few teams will likely ever have to endure a season as bad as the 1899 Spiders. Nevertheless, baseball remains a wildly unpredictable game, and no one can ever truly know what will happen when two great teams take the field.

Pages Related to What Was The Best And Worst Performances By An MLB Team Ever In A Season?