What Is The Format For The MLB Home Run Derby? 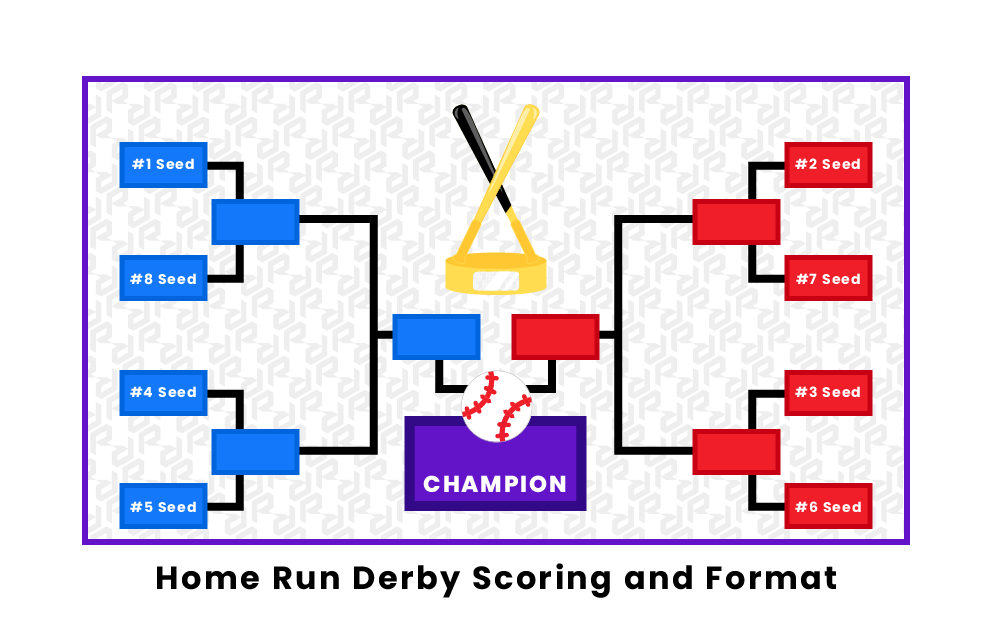 The MLB Home Run Derby is a competition held each year, where the league’s most powerful hitters are given the chance to showcase their skills. The Home Run Derby follows a specific format to keep the contest running smoothly, ensure each player gets a fair chance to bat, and determine a clear winner by the end. In a series of three rounds, each batter gets three minutes in the first two rounds and two minutes in the second to hit home runs, with the potential for bonus time depending on their longest home runs. Each round will begin once the first pitch is thrown, and the time will run out once the clock has reached zero.

There are a total of three rounds in the MLB Home Run Derby. The rounds are conducted in a bracket-style format, with four matchups between two players (eight total players) to begin the competition. Players are seeded in the bracket based on the number of home runs they hit during the current, ongoing season. If there is a tie between home runs hit, the players will be seeded according to their home run totals in the previous season. Within each round, the player with the higher seed always hits second.

A single-elimination format is used, where the player who hits more home runs advances to the next round in the bracket while the opposing player is eliminated. The second round consists of four players, and the third and final round comes down to the remaining two players.

The matchups in the first round of the bracket are:

Each player has three minutes to hit as many home runs as possible during the first two rounds of the competition. The final round only allows players two minutes to bat. The clock begins as soon as the first pitch is released. No more pitches can be thrown once the timer runs out. A pitch thrown right before the timer hits zero can still be hit and counted as a home run. Each player is also given a 45-second timeout to use in each round.

Players can also earn bonus time each time they bat. Each batter automatically has an additional 30 seconds of bonus time per round, but this time can be increased to 60 seconds if they hit a home run that travels a certain distance. This distance depends upon the ballpark where the derby is being held: for example, at the Coors Field Derby of 2021, 60 seconds could be earned by hitting a home run of 475 feet or more, while at the Dodger Stadium Derby of 2022, a 440-foot home run earned players 60 seconds of bonus time. As a general rule for all Home Run Derbies, players may not call a timeout during bonus periods.

Players in a matchup that hit the same number of home runs participate in a swing-off to settle the tie. The swing-off gives each player 60 seconds to hit as many home runs as possible. Timeouts may not be called during the swing-off period, nor will the clock stop. Time cannot be added to the 60 seconds allotted to each player. A second swing-off period begins if the score is still tied after both players have batted. No time limit is set during this period, and instead, the two players alternate, taking three swings at a time until a clear winner has been decided.

While a tie can cause rounds to last longer than expected, rounds may also end earlier than anticipated. When the second player hits more home runs than the first player in a given round, the round will end regardless if there is still time remaining on the clock. The second player does not need to hit any more home runs, and no bonus time is required.

When did the Home Run Derby format change?

The MLB Home Run Derby format underwent significant changes in the 2015 competition. One major change was switching from outs to a time limit. Players’ time at-bat used to be limited to a certain number of outs, while players are now given a time limit to hit as many home runs as possible. Another major change was the way matchups were organized in the contest. While players used to be organized based on their team and league, they are now matched up in a seeded bracket based on how many home runs they’ve hit during the season.

How many pitches do you get in the Home Run Derby?

Players are not given a certain amount of pitches per round in the Home Run Derby. Each player is given three minutes to hit as many home runs as possible within the first two rounds of the competition and two minutes during the final round. Batters can also earn bonus time if they hit a home run that travels 475 feet or more. Depending on how fast they hit and if they earn bonus time, the number of pitches each player receives can vary.

How many rounds are there in the MLB Home Run Derby?

There are three rounds in the MLB Home Run Derby. The tournament starts with eight players, reduces to four in the second round, and ends with a final matchup between two players.

Pages Related to What Is The Format For The MLB Home Run Derby?