What Is The Best Age To Start Baseball? 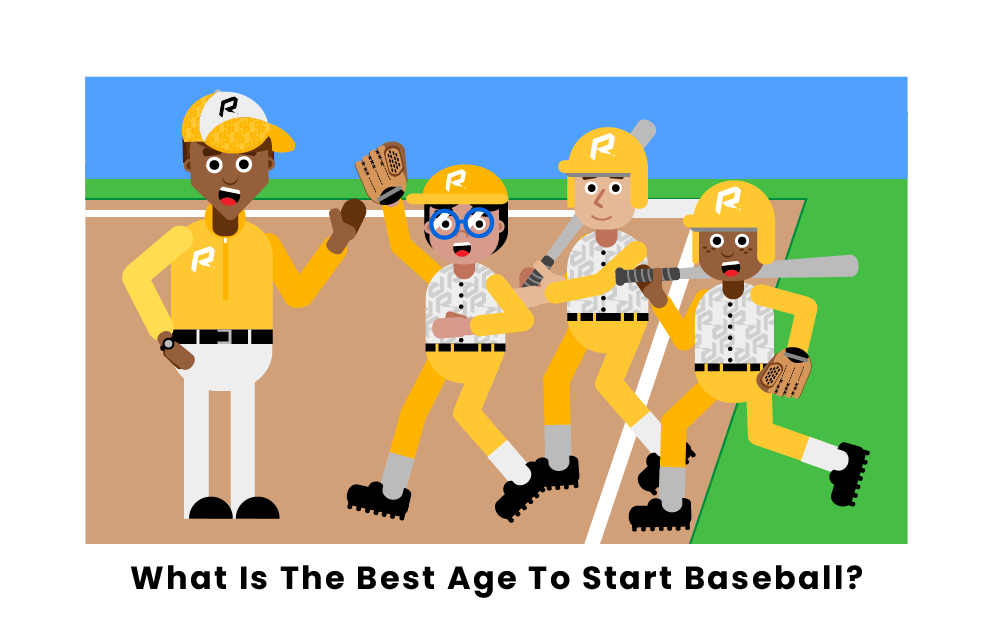 The sport of baseball currently ranks in the top ten in terms of global popularity. In the United States, it is inside the top five. Thus, kids all around the country and the world are beginning to play the sport each year. Read on to learn about some of the aspects of beginning baseball at different ages.

No matter the age a child starts playing baseball, one of the most important things for a parent to remember is to not put too much pressure on their child. There have been lots of studies done that show pressuring children too much in sports can be damaging both physically and mentally. In recent years, lots of kids have even stopped playing sports altogether due to the stress their parents are putting them under. Above all else, parents should remember to try and find a balance between pushing their children to get better in sports and pressuring them too much.

At this age, kids are not typically playing actual baseball where the ball is pitched in the air to them. The standard route for this age group is playing tee-ball. In tee-ball, kids hit the baseball off of a set tee rather than a pitch being thrown to them. Research suggests that the best age to begin playing tee-ball is at the age of 5, as before this, focus and ability to learn can be an issue for most kids. In addition to tee-ball, showing a child how to swing a bat and throw the ball on their own time in the backyard can be just as valuable to kids at this age before starting organized games.

When children get to the beginning of this age range, they are typically ready to move from tee-ball to semi-regular baseball. Oftentimes with kids aged 6-7, rather than having children pitch to each other, a coach will do the pitching at a slow, easy-to-hit speed. Called Coach Pitch, this version of the game helps kids learn to hit at a slower pace while at the same time preparing them for the real game of baseball. If coaches are unable to do the pitching, using a pitching machine set to a slow setting can be just as effective. By the time kids reach the upper ages of this range, they are usually ready to play regular baseball with kids pitching to other kids competitively. Known as Little League baseball, the 9-11 age range is when kids start playing the real game of baseball, albeit on a smaller field with smaller dimensions.

Once kids get to be 13-14 years old, they move away from Little League baseball to regular-sized fields and dimensions. At this age, kids start being able to react to hit faster pitching and be able to pitch at faster speeds. If a child is looking to start playing at this age, they should know that their skills will be far behind their counterparts who have been playing for years unless they have been practicing outside of organized leagues. This is especially true in baseball, as it is much more of a skill-driven game. Natural athleticism can only get you so far in this sport. That being said, if a kid is willing to put in the work and accept that they most likely will not be that good at first, they certainly can start at this age.

If a kid wants to play college baseball, they definitely need to start playing at an early age. As was mentioned previously, baseball is very much a skill-driven sport as opposed to an athleticism sport. This means that players must start developing those skills early if they want to play at the next level. Additionally, players should find high-level travel teams that play in highly competitive tournaments and showcases in order to get noticed by the right coaches and scouts. Another useful thing for prospective players to do is make highlight videos of themselves showing off their skills and posting them on a site such as YouTube in the hopes that the right person sees them. Only about 6% of high school players go on to play in college, so if a child wants to beat the odds, they definitely need to put in the work from an early age.

If a kid wants to play professional baseball, everything that was said for college baseball is true to an even greater extent. They have to work hard at an early age, play against the best competition, stand out against that competition, and get noticed by the right people. One thing that makes baseball unique is that players can either get drafted to Major League Baseball (MLB) right after high school or after three years of playing college baseball. Thus, if a player is very talented but does not feel like they are quite ready for the professional game, they can go to college and work on their skills for three years and become better prepared for the next level.

Parents whose kids are just starting to play baseball should know that baseball is considered a limited-contact sport. There are occasionally collisions when a kid is sliding into a base or when two fielders are going for the same ball, but, for the most part, players can go an entire game without making contact with another person. One thing that can be dangerous is players getting hit by a pitch when they are hitting. Batting helmets are designed to protect player’s heads, but sometimes other body parts are exposed. One thing parents can buy to help protect their kids is an elbow guard. These elbow guards can protect players' elbows from pitches and are usually effective at preventing injuries. This is not to say that kids need to go to the plate with every part of their body covered in padding, but certain areas, such as the elbow, can be useful to protect.

How do I get my kid started with baseball?

To get your kid started in baseball, the best thing to do is research and discover where and when the local league plays in your area. There are about 6,500 leagues across the country associated with Little League in the United States, so odds are there is a league near you for your child to play in. You can also get them started by teaching them how to swing a bat and throw a ball in your backyard on your own time.

How old should my child be to play baseball?

The best age to start playing tee-ball is around age 5 or 6. This is the age at which kids can physically perform the basic acts of the game and begin to process and learn the skills. Once kids are about 7 or 8 years old, they can move towards regular baseball, usually with a coach or machine doing the pitching. At about 9 or 10, they can begin playing baseball, where kids pitch to one another.

Can I teach my child baseball?

If you have some experience playing baseball or even just an understanding of the game, you can teach your child the basics. The basic fundamentals are hitting, fielding, and pitching. While every child does not need to pitch, they all should know how to hit and field. In addition to teaching skills, another thing you can do is watch baseball with your kid. Watching professional baseball players play in person or on TV can be a great way to teach young players the game.

How do I pick a baseball coach for my child?

More often than not, you will not have much or any of a say in who your child’s baseball coach is. Coaches often make up rosters after seeing the players, so players are just placed on a team. If you have a say in your kid’s coach, some characteristics to look for are coaches who stay positive, will coach all of the players even if they struggle, and know the game.

Pages Related to What Is The Best Age To Start Baseball?