What Are The Rules Of Baseball? 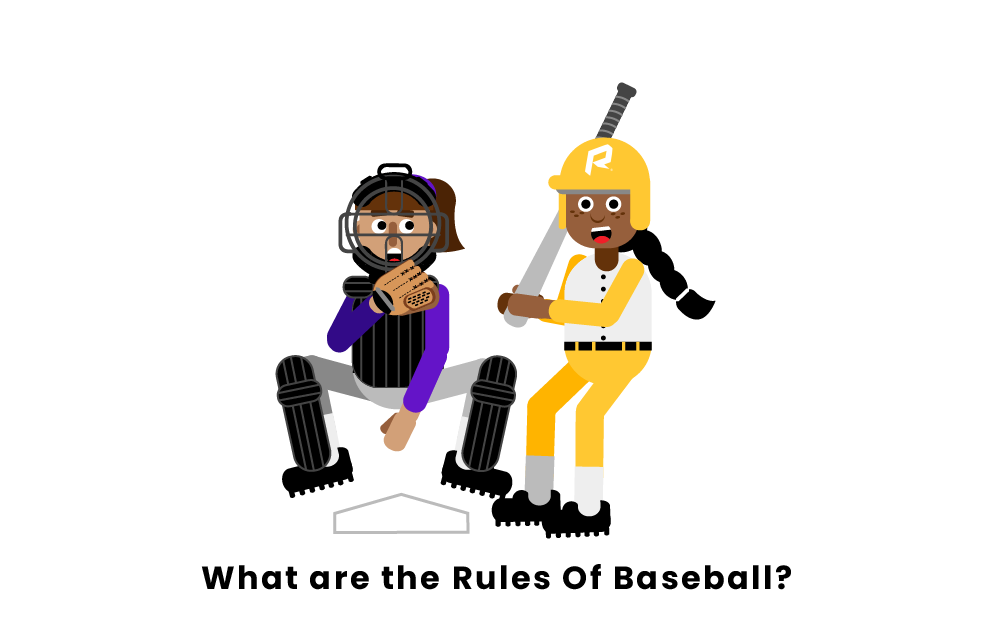 A baseball diamond is divided into the outfield and infield, where the four infield bases create a square and players bat from home plate before advancing from 1st, to 2nd, to 3rd, and finally back home to score, in that order. The distance in between each base is 90 feet and the distance from home plate to the pitcher's mound is 60.5 feet. There are lines that begin at home plate, run on the outside of both first and third base, and extend to the outfield. If a ball is hit outside of those lines, the ball is considered foul and any ball hit inside those lines is considered fair and in the infield. The outfield wall is typically 300 ft to 420 ft away from home plate.

When a baseball player is at bat, they are on the offensive and are trying to score a run for their team. One of the rules that a player must follow when up to bat is that batters must stay in the batter’s box in order to hit. If a batter is hit in their body by a pitch, they can advance automatically to first base. However, the player must be hit directly by the pitch, the ball cannot ricochet off of the bat and then into the batter. The batter also has to make an attempt to move out of the way of the ball. The batter may also try to advance to third base when there are two outs or there is no one on first and the third strike is dropped by the catcher. However, the batter is called out on the third strike if there is someone on first base and there are still fewer than two outs.

There are three ways a batter can be called out: a strikeout, where the batter misses the ball three times, a force out when the batter doesn’t get the the base before the field player gets to the base with the ball, or a tag out where a fielder who has the ball in their glove tags the runner while between bases. Once the batting order is set during the baseball game, it cannot be changed, although a coach can substitute in a player to replace someone in the lineup.

When a baseball team is on defense, that is also known as fielding the ball. There is what is called a fielder right of way, meaning that a fielding player has the right to occupy any space needed to catch or field a ball that has been hit and cannot be hindered while attempting to field a ball. If a player or coach from the batting team interferes with a fielder's right of way, the batter is automatically called out.  If a player makes a mistake while playing defense, or fielding the ball, they are charged with an “error” for not being able to make the “correct” play. There is also what is known as the infield fly rule. With this rule, a fair fly ball that can be caught by an infielder with ordinary effort, may be caught for an out when there is a runner on first and second, or first, second, and third and there are less than two outs.

One of the most well known baseball pitching rules is the balk. A pitcher must pitch with one foot on the rubber on-top of the pitcher’s mound. Once the pitcher stands on that piece of rubber or has one foot on each side, they are limited to certain motions, otherwise they can be called for a balk. It is only called when there is a runner on base and after the balk call, each runner may advance one base. While the balk is a complicated rule, some illegal motions include dropping the ball while standing on the rubber, standing on the rubber like the pitcher is preparing for a pitch without having the ball, and making a fake throw to first base from the rubber without throwing the ball.

Most regulation baseball games are 9 innings long. If there is a tie at the end of the 9th inning, the game will continue until there is a winning team. This is known as going into “extras,” or extra innings.

What are the ways a batter can be called out?

In baseball, there are three ways a batter can be called out.

What are the required dimensions of a baseball field?

What is a balk?

What is the infield fly rule?

The infield fly rule is used to protect runners and keep them from having to advance because the player who hit the ball was called out. The rule states that a fair fly ball that can be easily caught by an infield player may be caught for an out when there is a runner on first and second, or first, second, and third and there are less than two outs. The runners can then try to advance bases if they choose.

Pages Related to What Are The Rules Of Baseball?