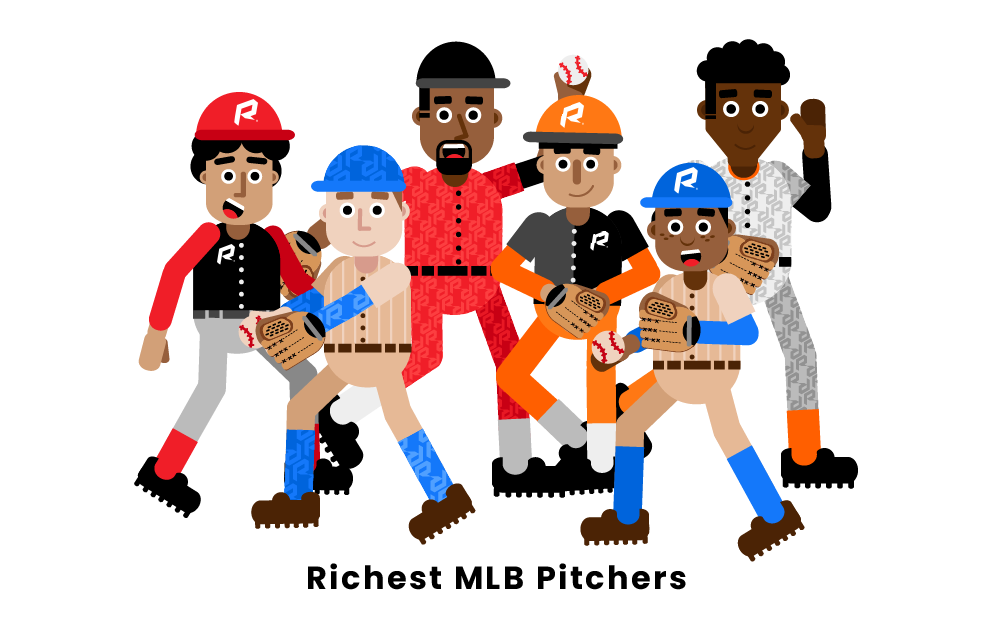 In the world of baseball, with great talent comes an extraordinary price tag. Pitchers are some of the most elite, finely-tuned athletes in the MLB, and their contracts reflect their skill set. From Justin Verlander to Mariano Rivera, major league pitchers have been some of the hottest commodities on the market with the salaries to show for it.

Who are the richest MLB pitchers of all time?

Starting pitcher Justin Verlander has seen groundbreaking earnings and massive growth in his net worth during his time as a major league pitcher, with $320 million in career earnings and a net worth of about $150 million. He began his pitching career with the Detroit Tigers in 2005 with a healthy salary of a few million dollars, but he soon exponentially increased his worth with flawless pitching skills and unbelievable performances that included two no-hitters (the only pitcher to have done so in Tigers history). He signed an $80 million contract with the Tigers from 2010 to 2014 and another $180 million deal with them from 2014 to 2019. He has pitched for the Astros since 2019, with a 2-year $66 million contract from 2019 to 2021 and a second contract for 2022 and 2023 that can earn him up to $50 million.

Extraordinary left-hander Randy Johnson saw many teams and many lucrative paydays in his 22 seasons as a major league pitcher, with a combined $175 million in contract earnings and a subsequent $95 million net worth. Johnson’s career featured stints with the Expos, the Mariners, the Astros, the Diamondbacks, the Yankees, and the Giants between 1988 and 2009. Perhaps his most memorable contract was an unprecedented $52 million awarded to him by the Diamondbacks in 1998, a deal which would pay off with countless 100+ mph pitches and a stunning 2001 World Series win over the New York Yankees. Even into his forties, Johnson was fine-tuned enough to earn a $44 million contract with the New York Yankees.

Legendary closer Mariano Rivera earned $170 million throughout his 19-season career with the New York Yankees and today has a net worth of approximately $90 million. While not the highest income racked up on this list at first glance, Rivera’s salary is proportionately the most valuable considering his position as a closer who typically only pitched an inning or two rather than a starter who pitched for 6+ innings. In the 952 games he played with the Yankees, Rivera earned approximately $132,000 per inning. With his extraordinary cutter and the all-time record for saves, Rivera more than earned his worth as a Yankee closer.

With over $260 million in earnings and a current $80 million net worth, CC Sabathia scored unprecedented contract heights in his 19 seasons as an MLB pitcher. Sabathia began his career with Cleveland in 2001 and quickly became the team's breakout star, eventually earning an annual salary of $8 million. However, he would ultimately be dealt to the Brewers. Sabathia’s subsequent deal with the Yankees, which would come to define his career, started him off with a staggering 7-year $161 million contract from the 2009 to the 2015 season. He would go on to lead the Yankees to a World Series win in 2009 and make an additional $65 million through additional contracts with the Yankees before retiring in 2019.

Johan Santana was a fearsome competitor who earned a whopping $182 million in his 15 years as a major league pitcher, with an overall net worth of $70 million. He began his career with the Minnesota Twins in the early 2000s and won multiple Cy Young awards. In 2008 he signed an extraordinary 6-year, $137.5 million contract with the Mets, where he would develop a lethal fastball and pitch a memorable no-hitter. Due to unfortunate recurring injuries, Santana would go to the Orioles for the 2014 season and to the Blue Jays for 2015, earning about $10.5 million in his last two years in the MLB.

Greg Maddux was one of the most iconic Braves pitchers in franchise history, earning nearly $154 million in his 24 seasons of pitching and a net worth of $70 million, impressive sums which could have been even heftier had he not turned down rival teams’ offers in order to stay with the Braves. He began his career with the Cubs in 1986; however, Maddux signed with the Braves in December of 1992 for $28 million over five years. He had extraordinary accuracy, with a 2.13 ERA from 1993 to 1997, making him arguably the best pitcher of his era. He returned to the Cubs in 2004 with a four-year $24 million contract and played for the Padres from 2007 to 2008 for $20 million. He was traded to the Dodgers in 2008 and retired after the season came to a close.