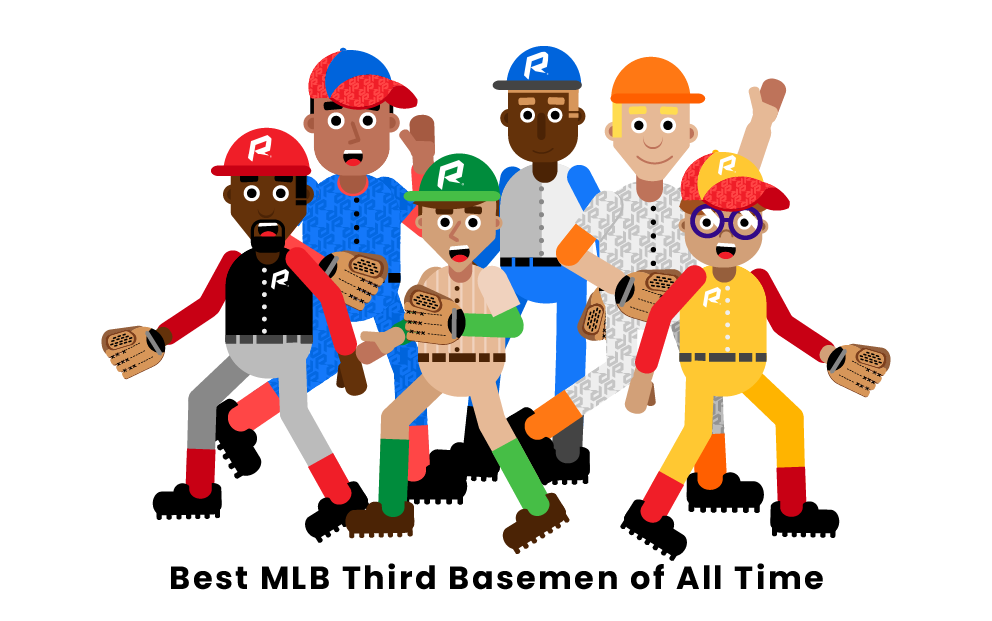 In baseball, the third base position represents one of the integral elements of a team’s defensive strategy, in many cases the last line of defense between offensive players and home plate. Third basemen are extremely valuable and have to possess a number of skills in order to perform adequately, such as hand-eye coordination, reflexes, power at the plate, and throwing power. Over the decades, many great players have stood head and shoulders above the MLB as excellent third basemen, and here, we consider the top six best MLB third basemen of all time.

Who are the best MLB third basemen of all time?

Mike Schmidt is one of the many notable baseball players who spent the entirety of their careers playing for one team. In Schmidt’s case, that team was the Philadelphia Phillies, and during his 18-year career with the franchise, he managed to distinguish himself as one of the greatest third basemen of all time. Schmidt’s early baseball years were marked by playing the sport in college in the state of Ohio, after which he was drafted by the Phillies in 1971, at the age of 21. He played in the minor leagues for a year and then moved to the majors in 1972, whereupon he struggled in his first season. However, over the following years, Schmidt’s hitting improved, and by 1974 he led the league in home runs, after which he broke a record in 1980 by hitting the most home runs ever recorded by a third baseman in one season, at 48. In all, Schmidt led the National League in home runs eight times and ended his career with a total of 548 home runs. However, Schmidt was even better in the field, winning ten Gold Gloves in his 18 seasons and helping the Phillies win two National League Championships and a World Series in 1980. Schmidt was also a three-time league MVP and was elected to the Baseball Hall of Fame in 1995.

George Brett is often referenced in the same category as players such as Babe Ruth, Ted Williams, and Joe DiMaggio for being a player whose career defined the team they played for. In Brett’s case, that team was the Kansas City Royals, whom Brett played for from 1973 to 1993. Like Mike Schmidt, Brett’s career in the majors started off rocky in 1974, when he batted at only a .282 average and only drove in 47 runs. However, with the help of Coach Charlie Lau, who taught Brett a new hitting style, his following season exploded, and he earned a .308 batting average, with 195 hits, 89 RBIs, and 13 triples.

In the years that followed, Brett continued to improve, racking up a .333 average and 200 hits in 1977 to win his first batting title, and leading the Royals to three consecutive American League West Titles, only to be defeated each time by the Yankees on the cusp of making it to the World Series. In 1980, the Royals managed to overcome the Yankees at last, with an injured but determined Brett helping them make it into the World Series, only to lose in a devastating defeat to the Philadelphia Phillies, among them Brett’s fellow third baseman, Mike Schmidt. However, much like their losing streak against the Yankees, Brett and the Royals gained their World Series revenge in 1984 when they defeated Toronto in seven games, which included three home runs by Brett. After his championship season, Brett was plagued by injuries and never returned to the playoffs, but continued to play well until his retirement in 1993, including joining the exclusive club of players to accumulate 3,000 hits in 1992. Brett was elected to the National Baseball Hall of Fame in 1999.

Another member of the exclusive 3,000-hits club, Wade Boggs was another prominent and successful third baseman who graced the diamond for 18 years, playing for the Boston Red Sox, the New York Yankees, and the Tampa Bay Rays (then known as the Devil Rays). Drafted by Boston in 1976, Boggs was a left-handed batter with a unique inside-out swing that had been taught to him by his father. This unique style gave him great effectiveness as a batter, and he ended his baseball career with a more than respectable .328 career batting average. By 1985, Boggs was putting up records across the league, and that year, he scored the highest number of hits by a single player in 55 years with 240 total hits. In his 11 years as a Red Sox player, Boggs won five batting titles, finished second once, and finished third twice. In 1987, Boggs left Boston to play for the Yankees, playing five seasons and batting at a .313 average. During this stint, his skills as a third baseman shined, and Boggs won two Gold Gloves in his time with New York, the oldest non-pitcher to win the award for the first time. In 1998, Boggs signed with the Tampa Bay Devil Rays in their first season as an MLB team, playing two seasons with them and earning his 3,000th hit as a member of the team. Boggs retired in 1999 and was inducted into the Baseball Hall of Fame in 2005.

One of the longest-playing athletes on our list, Adrian Beltre put himself into the history books as a third baseman for 21 seasons in the MLB, during which he played for four teams: the Los Angeles Dodgers, the Seattle Mariners, the Boston Red Sox, and the Texas Rangers. Over the course of his long career, Beltre played in 2,933 games, the 15th-most in MLB history. Beltre was a standout player as a third baseman, often leading his fellow third basemen in hits and RBIs and standing as the third baseman with the fourth-most home runs of all time (after Mike Schmidt, Eddie Mathews, and Chipper Jones). In his career with the Dodgers, which began with his drafting in 1998, Beltre played in four All-Star Games and won five Gold Gloves and four Silver Sluggers. Beltre helped the Rangers win three division titles and even joined them in the World Series in 2011, though they lost to the St. Louis Cardinals in seven games. After leaving the Dodgers in 2004, Beltre played with the Seattle Mariners from 2005 to 2009, the Boston Red Sox in 2010, and the Texas Rangers from 2011 to 2018. He retired in 2018, having accumulated 3,166 career hits, 1,707 RBIs, and 477 home runs.

Another star third baseman, Eddie Mathews is notable for being the only player to play with the Braves in all three of their home cities (Boston, Milwaukee, and Atlanta) and was a member of the legendary squad, along with right-field icon Hank Aaron, that led the Braves to their 1957 World Series Championship. Growing up in Santa Barbara, California, Mathews played football and baseball in high school and signed with the Boston Braves on the very night he graduated in 1949. In 1952, he hit 25 home runs for the Braves in his rookie year, and he followed that up with 47 in 1953, earning the National League home run title. In August of 1954, Mathews made history by being the athlete on the cover of the very first issue of Sports Illustrated. In the 1957 World Series, where the Braves played the New York Yankees, Mathews proved integral by hitting a home run in the bottom of the 10th inning during Game Four and also scored the Braves’ only run in Game Five. In the deciding game of the series, Mathews hit a two-run double and made a backhanded stop of a hard ground ball to stop the Yankees from coming back in the ninth inning. Mathews and the Braves won the World Series and returned to the championship the following year but lost in their rematch against the Yankees.

In 1959, Mathews hit 46 home runs to win another league title. In 1967, he was traded to the Houston Astros, and that year he reached his 500th home run, finishing his career with 512 in total. Mathews’ final season was with the Detroit Tigers, whom he joined in their 1968 World Series win, his second championship. After retiring, Mathews was a manager for the Braves from 1972 to 1974 and was also a scout and batting instructor for many other teams. Mathews was elected to the Hall of Fame in 1978.

Born Larry Wayne Jones, Chipper Jones was a star player for the Atlanta Braves for the entirety of his career, joining Eddie Mathews as a standout third baseman for the Braves squad. The number one pick in the 1990 MLB Draft, Jones went on to enjoy a stellar career with Atlanta, hitting 468 home runs, the National League record for the most career home runs by a switch hitter. Over the course of his career, Jones won two Silver Slugger Awards and was named the league MVP in 1999. Jones set a number of other records, among them the Most Home Runs in a Season by a Switch Hitter (45 in 1999). Jones was also the all-time RBI leader for the Atlanta Braves, an honor he earned in 2006 by driving in his 1,144th run. That same year, Jones passed Hank Aaron as the Braves’ all-time hits leader with his 1,902nd hit. Jones hit his 457th home run on his fortieth birthday, April 24, 2012, becoming the fifth player in baseball history to homer on his fortieth birthday. Jones retired in 2012 and was elected to the Baseball Hall of Fame in 2018.

Who is the greatest MLB third baseman of all time?

Mike Schmidt is widely considered the greatest MLB third baseman of all time. In his career with the Philadelphia Phillies, Schmidt was a 12-time All-Star, won ten Gold Gloves, was named World Series MVP in 1980, was a three-time league MVP, and won six Silver Sluggers. Schmidt was considered one of the best third basemen ever, with his 10 Gold Gloves being the most ever won by a third baseman. He was elected to the Hall of Fame in 1995.

What MLB third baseman has won the most Gold Glove awards?

Brooks Robinson is the third baseman with the most Gold Glove awards. In his career, Robinson won 16 Gold Gloves, winning them from the years 1960 to 1975. Robinson was also the 1970 World Series MVP, an 18-time All-Star, a two-time World Series champion, and the 1964 American League MVP.

What MLB third baseman has the most career home runs?

Mike Schmidt is the MLB third baseman with the most career home runs. In his career, Schmidt hit a total of 548 home runs, dominating the National League in the 1970s and 1980s. Schmidt led the MLB in home runs eight times, and also won three MVP awards.