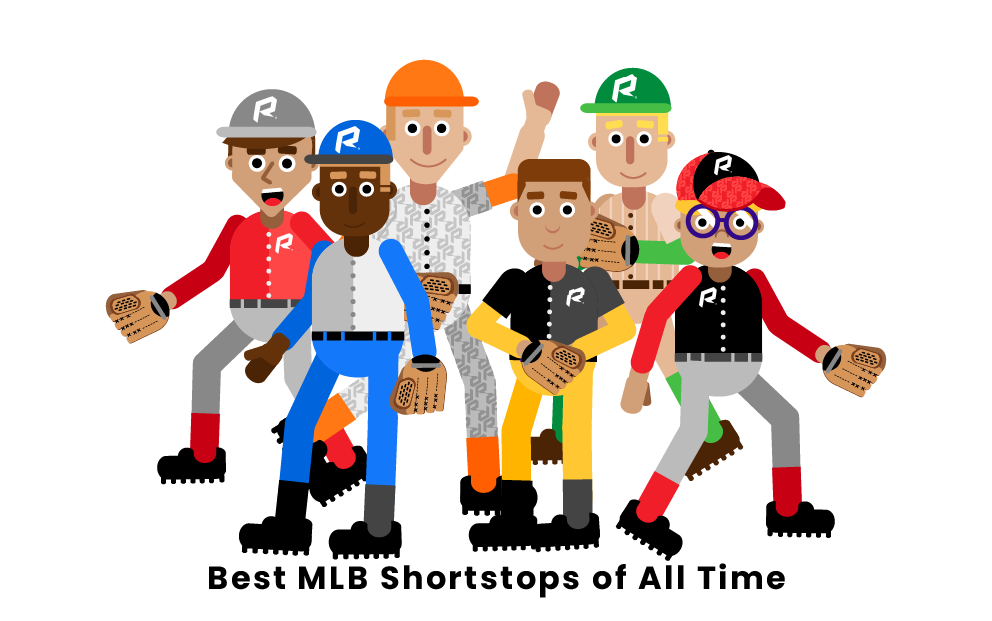 The shortstop position is one of the most demanding in the game. They are tasked with being the captain of the infield and are expected to be one of the best defenders on their team. In today’s modern game, hitting for average and power have also become requisites, but the best to ever play the position understood that long ago. Below are the top six shortstops in the history of Major League Baseball.

Who are the best MLB shortstops of all time?

Though he played before the time of the MVP award and the All-Star Game, there’s no doubt Honus Wagner was the greatest ever to play the shortstop position. The number of times he led the league in multiple categories, whether it be slugging percentage, batting average, or doubles, spoke to his dominance as a hitter. He was also seen as one of the best fielders at any position during his playing days. He was given the nickname “The Flying Dutchman” because of the speed and ferocity with which he played the game. He stole over 700 bases in his career and also racked up 252 triples, the third-most of all time. Wagner was inducted into the National Baseball Hall of Fame in 1936.

Cal Ripken Jr. was known as “The Iron Man,” and for good reason. His 2,632 consecutive games played is the longest streak in the history of Major League Baseball, and he’s miles ahead of anyone else. Ripken was an all-around player, combining excellent fielding with tremendous power at the shortstop position. At a time when most shortstops were seen as defensively-centric and weak hitters, Ripken Jr. revolutionized the position with his prowess as a slugger. Over 21 seasons, he smacked 3,184 hits and clobbered 431 home runs. Ripken Jr. was inducted into the National Baseball Hall of Fame in 2007.

There is perhaps no one more iconic in the sport of baseball than Derek Jeter. Nicknamed “The Captain,” Jeter spent 20 years as one of the best players on the most storied franchise in baseball. He was the perfect modern shortstop: smooth fielding to go along with great hitting and enough power to be feared. Jeter never won an MVP, but his list of accomplishments is impressive nonetheless. He was named to 14 All-Star teams and won five Gold Gloves to go along with five Silver Sluggers. One of Jeter’s most characteristic traits was his ability to show up in the postseason, where he had a .308 batting average and won World Series MVP in 2000. Jeter was inducted into the National Baseball Hall of Fame in 2020.

Though many may remember him as a third baseman, Alex Rodriguez was one of the best shortstops in the league when he first came up. He provided excellent defense while also becoming one of the most productive power hitters in the game. He may also be one of the main reasons Jeter did not win any MVP awards, as Rodriguez took home three MVPs in a five-year span. Once he went to the Yankees, Rodriguez moved to third base, but he did win two Gold Gloves during his time as a shortstop. His 696 career home runs are by far the most of anyone on this list.

Compared to the rest of the players on this list, Ozzie Smith was a below-average hitter. But what he lacked in hitting, he more than made up for in defense. Smith’s nickname was “The Wizard,” and for good reason. His 13 Gold Gloves are the most ever by a shortstop, and he is seen as one of the most athletic players the game has ever known. Whether it was doing backflips after wins or turning spectacular double plays, Smith had a flair for fielding that remains unmatched. Ozzie was inducted into the National Baseball Hall of Fame in 2002.

Barry Larkin was one of the most complete players of the 90s, showcasing great ability at the plate and in the field. Larkin’s well-rounded game featured everything a team could ask for from their shortstop: great fielding, power at the plate, and tremendous leadership. Larkin won the MVP award in 1995 at a time when big sluggers were headlining the game. He finished his career just shy of 200 home runs and just under a .300 batting average while racking up over 2,400 hits. Larkin was part of the great Reds’ dynasty of the 90s, winning a World Series in 1990 as well as three Gold Gloves. Larkin was recognized for his accomplishments in baseball by being inducted into the National Baseball Hall of Fame in 2012.

Who is the greatest MLB shortstop of all time?

The greatest MLB shortstop of all time is Honus Wagner. His ability to be one of the top hitters in the league while also playing outstanding defense separated him from the rest. Wagner finished with 3,420 hits, second to only Derek Jeter among all shortstops. He was also an eight-time batting champion who consistently led the league in multiple offensive categories.

What MLB shortstop has won the most gold glove awards?

Ozzie Smith has won the most Gold Gloves of any shortstop with 13. Smith is widely regarded as the best defensive shortstop ever, and he has the resume and reputation to back it up. His wizardry in the field was often showcased on highlight reels across the nation, and he was also a productive hitter.

What MLB shortstop set the record for most consecutive games played?

Cal Ripken Jr. set the record for most consecutive games played with 2,632. That’s not just the most by a shortstop, it’s the most ever in the history of the game, and by far. The next closest player is Lou Gehrig, who appeared in 2,130 games, a record that was seen as unbreakable at the time. Ripken Jr. earned the nickname “Iron Man” for his ability to stay healthy.

Pages Related to Top 6 Best MLB Shortstops of All Time