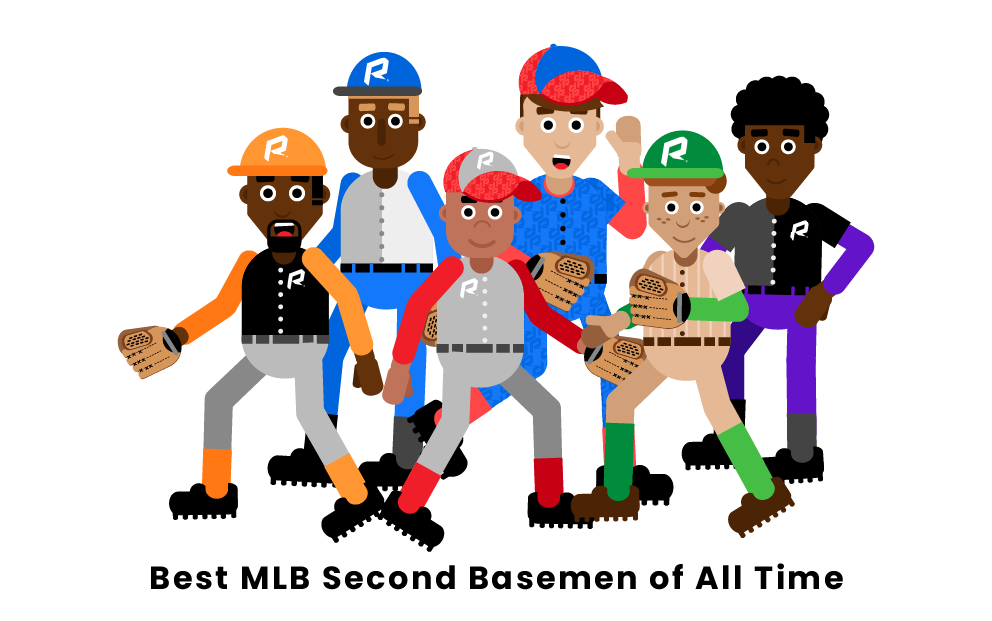 Known as one half of the keystone combination, second base has historically been a defense-first post. Though players here tend to get overlooked in favor of their teammates at shortstop, second basemen see some of the most action in the field and are required to play with smarts. Below are the six best to ever play the position in Major League Baseball history.

Who are the best MLB second basemen of all time?

Rogers Hornsby was one of the greatest hitters baseball has ever seen. He finished with a career batting average of .358 and led the league in hitting seven times. Hornsby also led the league in on-base percentage and slugging percentage nine different times. In 1926 he won his only World Series with the St. Louis Cardinals. Through his 23 seasons, Hornsby collected 2,930 hits and 301 home runs. He spent his last five years as a player-manager for the St. Louis Browns and continued to coach after retiring. Hornsby went on to be inducted into the National Baseball Hall of Fame in 1942.

Although he only played 11 seasons, Jackie Robinson was one of the most impactful players in the history of the sport. He became the first African-American to play in Major League Baseball when he debuted in 1945. Robinson was one of the most electric players of the time, combining skills on the field and at the plate en route to seven All-Star appearances. He possessed great speed and was an excellent defender at second base. He was also an amazing contact hitter, never striking out more than 40 times in a season. Robinson won the MVP award in 1949 and finished in the top seven in voting three other times. Jackie Robinson was inducted into the National Baseball Hall of Fame in 1962.

Joe Morgan was one of the best defensive second basemen of all time, and his skills at the plate weren’t far behind. He captured back-to-back MVP awards in 1975 and 1976 while playing perhaps the most complete second base ever seen. Morgan was a part of the Big Red Machine in Cincinnati that dominated the 70s, making four World Series appearances and winning two. He made eight consecutive All-Star games and won five straight Gold Gloves during that time. Even at the age of 38, Morgan took home his only Silver Slugger award. He finished his 22-year career with over 2,500 hits and was inducted into the National Baseball Hall of Fame in 1990.

Rod Carew was one of the great pure hitters in the history of Major League Baseball. Like Hornsby, he led the league in batting average seven times, and he finished his career with over 3,000 hits. Carew was one of the most consistent players in the sport, hitting over .300 in 15 consecutive seasons. He was also selected to 18 straight All-Star Games to begin his career. Though he hit less than 100 home runs in his career, Carew is still seen as one of the best hitters ever to play second base. Rod was inducted into the National Baseball Hall of Fame in 1991.

Though Nap Lajoie doesn’t have the same list of awards as the other second basemen on this list, he’s the only one who can say he’s had a team named after him. He was so popular in Cleveland that the team renamed itself the Cleveland Naps in 1903. Lajoie played before the time of the All-Star Game or the MVP award, so he had to let his numbers do the talking. He won the Triple Crown in 1901 and led Major League Baseball in batting average five times. He also holds the record for the highest batting average ever in a single season, with a .426 mark in 1901.

Roberto Alomar is without question the greatest defensive second baseman ever. His ten Gold Gloves are the most by a second baseman, and his reputation around the league was that of a defensive wizard. Alomar was also an exceptional hitter, winning the Silver Slugger four times and batting .300 for his career. Though he never won a regular-season MVP award, he was named the 1992 ALCS MVP and also won the All-Star Game MVP in 1998. He won back-to-back World Series rings with the Blue Jays in 1992 and 1993 and is one of the most famous baseball players to ever hail from Puerto Rico. Alomar was inducted into the National Baseball Hall of Fame in 2011.

Who is the greatest MLB second baseman of all time?

The greatest second baseman of all time is Rogers Hornsby. Hornsby had a career batting average of .358, second all-time behind only Ty Cobb. He is one of two players ever to hit over .400 in three different seasons, and many consider him the greatest right-handed hitter in the history of baseball. He won the Triple Crown twice and also took home the MVP award twice.

Who hit the most home runs as a second baseman?

Jeff Kent hit the most home runs as a second baseman with 377. Although he does not appear on this list, Kent was one of the best power-hitting second basemen to play the game. He brought tremendous power to a position that had traditionally lacked sluggers. He won the National League MVP Award in 2000 and was named a Silver Slugger four times. Kent also made five All-Star teams during his 17-year career.

Who has the most MLB All-Star Selections as a second baseman?

Rod Carew has the most All-Star selections of any second baseman. Carew was selected as an All-Star in each of his first 18 seasons, only failing to make it in his last year. He was an outstanding hitter who finished with over 3,000 hits and led the league in batting average seven times. Carew also paced Major League Baseball in on-base percentage four times during his career despite never walking more than 80 times in a season.