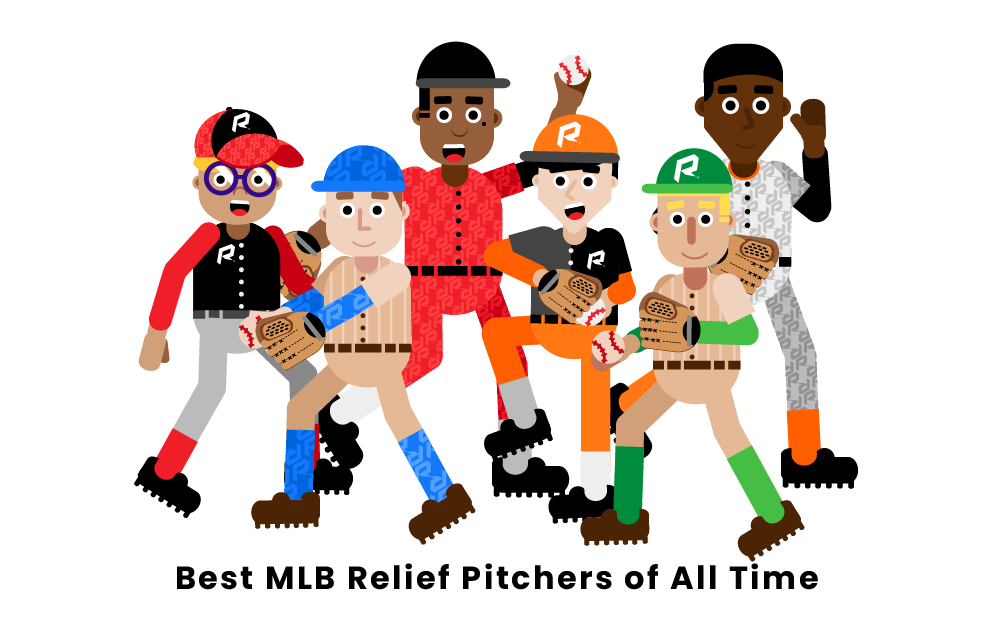 Many players have a role in a major league bullpen throughout the course of a season, but the truly elite relievers often fill the role of closer. Finishing the game by getting the last few outs is a tough role, and this list includes six of the best ever to do it.

Who are the best MLB relief pitchers of all time?

Mariano Rivera is the greatest relief pitcher in Major League Baseball history. All of the numbers agree with this statement as he ranks first all-time in games saved with 652 and games finished with 952, had a career ERA of 2.21, and is one of only four relievers to record over 1,000 strikeouts in the same league. His longevity over a 19-year career with the New York Yankees and his truly dominant cutter helped him secure those incredible career marks, and ultimately, those numbers helped make him the first player ever to be voted into the National Baseball Hall of Fame unanimously. His playoff dominance was well documented, with more people having set foot on the moon than on home plate against Mariano in the playoffs despite his long track record of pitching in the playoffs (12 to 11). Rivera was inducted into the National Baseball Hall of Fame in 2019.

Trevor Hoffman is second on the all-time saves list with 601 saves, which is well over a hundred more than the third-place finisher. His 19-year career was mostly spent with the San Diego Padres and saw him become one of just 12 relief pitchers to amass over 1,000 career strikeouts and one of just four players to do that in only one league. Hoffman was a seven-time all-star utilizing his dynamic changeup to dominate hitters. He finished his career with remarkable numbers, such as a 2.87 ERA and 1.05 WHIP, making him one of the best relief pitchers of all time. Hoffman was named into the National Baseball Hall of Fame in 2018.

Dennis Eckersley was a successful starting pitcher from 1975 to 1986, spending time with Clevland, Boston, and the Chicago Cubs. In 1987 he made the transition to the bullpen when he became a member of the Oakland Athletics. Over the next nine years with Oakland, Eckersley redefined his career and earned a spot on the list of greatest relief pitchers of all time. If he had spent his entire career closing games, perhaps he would have amassed even more saves than Rivera, but as it is, his combination of 197 career victories and 390 career saves is incredible. In 2004, Eckersley was elected into the National Baseball Hall of Fame.

Rollie Fingers, famous for his well-groomed mustache, was also an elite pitcher out of the bullpen. He spent the first few years in the league splitting time coming out of the bullpen and the rotation, but from 1972 on, Fingers put together a dominant run as a full-time closer. Spending time with Oakland, Milwaukee, and San Diego, Fingers was a seven-time all-star that compiled 341 career saves. He was a master of the strikeout, collecting 1,183 out of the bullpen and 1,299 total during his career while also finishing with an impressive 2.90 ERA. Fingers was only the second reliever ever to be elected into the National Baseball Hall of Fame, doing so in 1992.

Rich “Goose” Gossage was a nine-time all-star and Hall of Famer that split his 22-year career with nine different teams. His longest tenure came with the New York Yankees, where he had three of his most dominant seasons. His 1340 strikeouts out of the bullpen rank second all-time, and overall he has over 1,500 career strikeouts. His 310 saves and 124 wins are an impressive combination, particularly with a career ERA of just 3.01. Gossage was a dominant pitcher for over two decades, earning his spot on the list of all-time greats. He was elected to the National Baseball Hall of Fame in 2008.

Billy Wagner was one of the most dominant left-handed relievers of all time. He finished just two career saves behind fellow lefty John Franco for the all-time record for a southpaw. Unlike Franco, Wagner was a hard-throwing pitcher that specialized in strikeouts. He is one of a dozen relief pitchers to record over 1,000 strikeouts and one of just four to do so in one league. Overall, Wagner was a seven-time all-star that split time with five teams over a 16-year career in which he produced Hall of Fame worthy numbers.

Who is the greatest MLB relief pitcher of all time?

Mariano Rivera is the greatest MLB relief pitcher of all time. His 2.21 career ERA, 652 career saves, and 952 games finished all stand as the best mark of any reliever in history. His cutter was perhaps the best pitch in the game during his career as it seemed to only ever miss bats or shatter them, and it made him the best closer in history.

Who holds the MLB record for most career saves?

Mariano Rivera holds the MLB record for most career saves with 652, a record he compiled over a 19-year career with the New York Yankees. Rivera used his dominant cutter to mow down hitters and close out games for many elite Yankees teams over the years. Rivera has over 50 more saves than any other player, and no active player is within 200 saves of his record. Mariano’s 652 save record may well stand for many years to come.

Has anyone ever been unanimously elected into the MLB Hall of Fame?

Mariano Rivera was the first player in the 83-year history of the baseball Hall of Fame to be voted in unanimously. The honor had never been bestowed upon a player because of a sort of unwritten rule followed by the voters. At least one or two would leave even the greatest players off of their ballot, knowing that player would get the required votes for entry. That all changed when Rivera, easily the most dominant closer of all time, had his chance to be voted in.