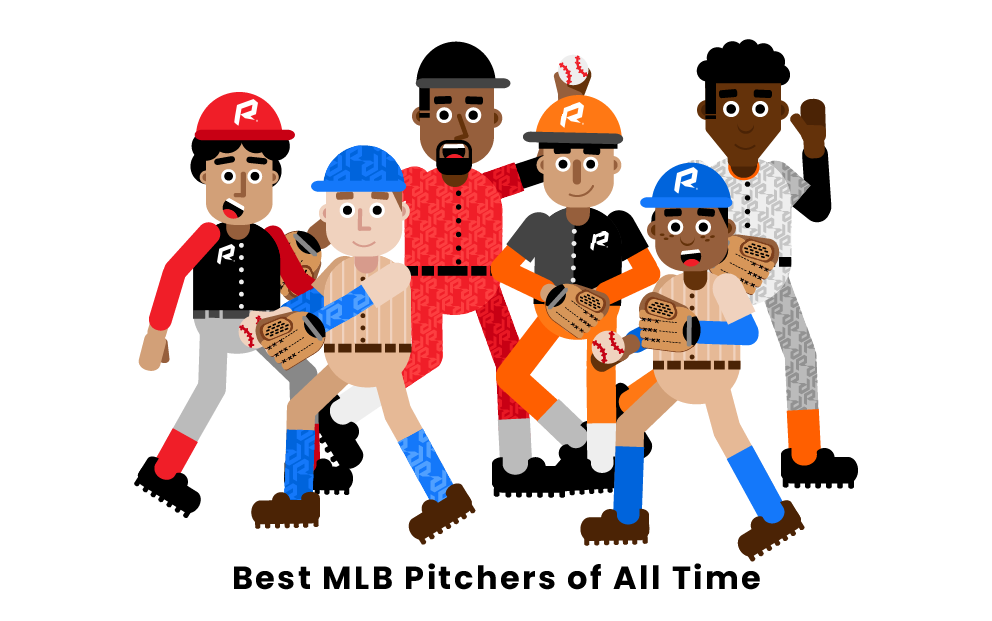 Pitchers are the biggest names in baseball, next to sluggers. They are some of the most iconic and criticized players, with the weight of a game resting on their shoulders. An elite pitcher can win a game almost single-handedly. Great pitchers inspire fear in hitters and admiration in fans. Read on to learn about the top six best pitchers of all time.

Who are the best MLB Pitchers of all time?

Walter Johnson is the greatest MLB pitcher in all of history. A right-hander for the Washington Senators, he recorded 110 shutouts over his 21-season career, a record that still stands today. Born in Kansas, Johnson’s family moved to Orange County, California, where he played baseball in high school. At 19, he lived in Idaho and played baseball for the Idaho State League when a talent scout for the Senators noticed Johnson and offered him a contract. Johnson was the most feared fastballer of the era, and his pitches were recorded above 90mph, which was incredible for the time. He spent his entire playing career with the Senators, racking up 417 wins. After retiring in 1927, he managed the Senators, then the Cleveland Indians.

Cy Young was a precise, hard-throwing right-hander who defined pitching in baseball’s Golden Era. Setting numerous records, he was so successful that the MLB’s annual award for pitching excellence was named in his honor. Young grew up on a farm in Ohio and played for amateur baseball leagues. He went semi-pro at 21, then joined Canton’s minor league team the next season. This is where he got the nickname “Cy” because his fastball destroyed fences, leaving them looking like a cyclone hit them. He was quickly picked up by the Cleveland Spiders, beginning his 22-season major league career, during which he played for five teams. Young tallied a monstrous 511 wins, a record which has never been broken.

A right-hander for the Red Sox and the Yankees during the 1980s and 90s, Roger Clemens was one of the most dominant and competitive pitchers of all time. During his 24-season career, Clemens won two World Series championships and racked up 4,672 strikeouts, the third-most all-time. Clemens grew up in Ohio then lived in Texas during his high school years, where he played football, basketball, and baseball. MLB teams scouted him out of high school, but instead, he played for San Jacinto, then Texas, taking the Longhorns to the 1983 College World Series. Earning the nickname “Rocket,” Clemens established himself as an aggressive force, winning seven Cy Young Awards during his time in Boston, Toronto, New York, and Houston.

Nicknamed “The Big Unit” and standing 6’ 10”, Randy Johnson is the tallest pitcher on this list and one of the tallest in MLB history. Known for his indomitable fastball, Johnson was a left-handed pitcher who batted right-handed. He grew up in Walnut Creek, California, and excelled at basketball and baseball in high school. Johnson was drafted out of high school but instead went to USC on a full baseball scholarship, also playing basketball for two years. Johnson’s MLB career spanned 22 seasons and six teams, but he spent most of his time with the Seattle Mariners and Arizona Diamondbacks, where he won a World Series as co-MVP. Randy Johnson is the oldest pitcher to throw a perfect game, which he did at age 40, and he holds the record for most strikeouts by a left-hander.

Sandy Koufax was a Dodger for his entire major league career. His left-handed curveballs and four-seamers helped propel the team to four World Series championships. Called "The Left Arm of God" and known for projecting his pitches to batters yet remaining unhittable, Koufax dominated the National League in the 1950s and 60s and was one of the greatest pitchers of all time. He grew up in Brooklyn, playing high school basketball and youth baseball in various leagues. Koufax went to the University of Cincinnati, where he played basketball and baseball. After making a favorable impression at a Pirates tryout, he was signed by the Dodgers, where he spent all 12 seasons of his career. Koufax retired early in 1966 due to arthritis and injury in his pitching arm, stifling what very well could have gone on to become the most legendary pitching career in baseball history.

Greg Maddux was a technical master known for the variable speed and precision placement of his pitches. A right-hander with two stints for the Cubs, he also played for the Braves, Dodgers, and Padres. Maddux holds the record for most Gold Glove Awards, at 18, and for most putouts by a pitcher, at 546. He grew up in Las Vegas, where he and his older brother Mike trained with scout Ralph Meder. Mike made the majors in 1982, and Greg was drafted by the Cubs two years later. After six seasons, he went to Atlanta, taking them to a World Series championship in 1995. Maddux retired after 23 seasons in the MLB. Today he is the pitching coach for UNLV.

Who is the greatest MLB pitcher of all time?

Walter Johnson is considered to be the greatest MLB pitcher of all time. Called “The Big Train” because of the speed and force of his right-handed fastball, Johnson pitched all 21 seasons of his career for the Washington Senators, beginning in 1907. He is the all-time leader in career shutouts at 110, and his record of 3,508 strikeouts stood for nearly 50 years. Over 5,914 innings pitched, he logged an impressive 2.17 ERA. Johnson’s 417 wins are the second most of all-time behind only Cy Young.

Who holds the record for the most career strikeouts as a pitcher?

Nolan Ryan holds the record for the most career strikeouts as a pitcher, with 5,714. During his 27-season career, he achieved 324 wins and an ERA of 3.19 while playing for the Mets, Angels, Astros, and Rangers. His nickname was “The Ryan Express,” and he consistently threw fastballs over 100mph throughout his career, as well as a notorious curveball. Ryan is significantly ahead of runner-up Randy Johnson, who earned 4,875 strikeouts over 22 seasons.

Who holds the record for the most Cy Young Awards won?

Roger Clemens holds the record for the most Cy Young Awards won. Over his 24-year career with four different teams, he was recognized with the MLB’s annual award for excellence and dominance in pitching seven times. Clemens won back-to-back awards twice, in 1986 and 1987, and in 1997 and 1998. He won his final Cy Young in 2004, setting the record. In second place is Randy Johnson, with five Cy Youngs. Greg Maddux and Steve Carlton both have four to their name.

Pages Related to Top 6 Best MLB Pitchers of All Time