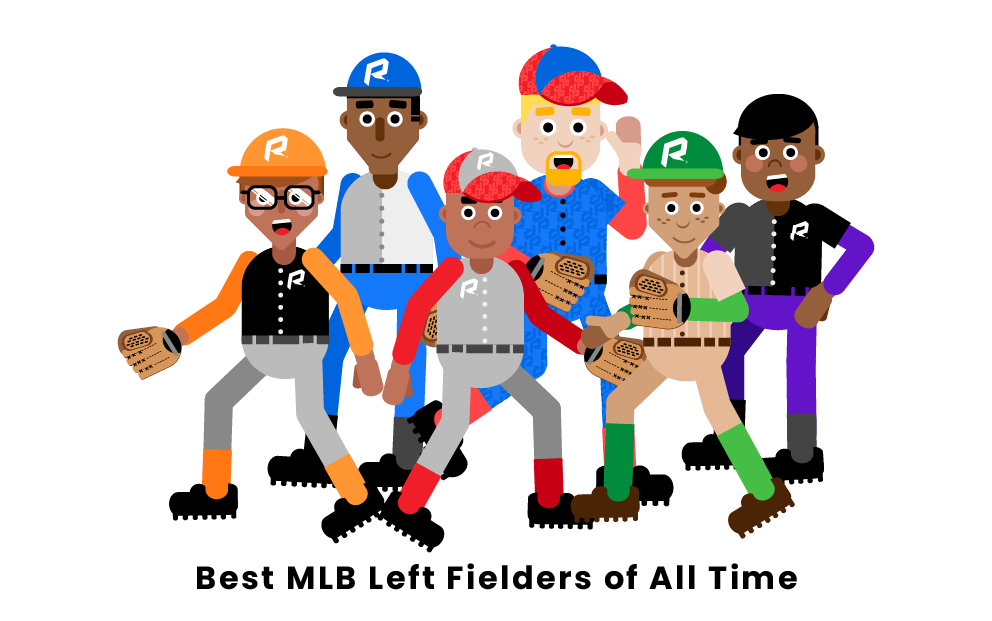 Every position is important in baseball, but the left fielder is arguably the most impactful of them all. With over half of baseball being right-handed, players will sky the ball into left field more often than not. Below is the list of the greatest MLB left fielders of all time.

Who are the best MLB left fielders of all time?

At face value, Barry Bonds is arguably the greatest player in the history of baseball. He is the MLB’s home run king and also set the record for most dingers in a season in 2001 with 73. Bonds also has the most walks in a season (232 set in 2004) and career (2,558). The home run champ rewrote the record book and was truly a complete player; however, his accomplishments are often overshadowed by allegations of steroid usage during his career. As a result, Bonds was not elected to the Hall of Fame when all was set and done.

No player in MLB history has hit the .400 batting average mark in a season since Ted Williams in 1941. Williams is considered one of the greatest pure hitters in the history of the sport. He batted .344 for his career and also hit over 500 home runs, demonstrating his ability to hit for contact and power. Nicknamed “The Kid,” Williams spent his entire 19-year career in a Boston Red Sox uniform, and as great as he was, he could’ve been even better. Williams served in WWII right in the heart of his prime (1943-45) and also left the 1952 season early to serve the U.S. in Korea.

When mentioning statistics, people often use the term “triple crown” to describe statistics that are related. Well, Pete Rose owns the “quadruple crown.” Rose played the most games in history (3,562), has the most plate appearances (15,890) and at-bats ever (14,053), and the most hits in league history (4,256) to top it off. Nicknamed “Charlie Hustle,” he won World Series MVP in 1975 and another title the following year as part of the “Big Red Machine.” However, Rose isn’t in the Hall of Fame as he’s currently banned from baseball for allegations of gambling on games.

The Boston Red Sox went from Ted Williams in left field to Carl Yastrzemski in 1961. Yastrzemski played 14 seasons in left field before shifting to the infield for another hall of famer, Jim Rice. Captain Carl led the league in batting average three times over the course of his 23-year career, all spent with the Red Sox. He also led the league in home runs in 1967 and is currently third in Boston’s lifetime home run leaders. Yastrzemski was a five-tool player: he could run, throw, field, hit, and hit with power.

Rickey Henderson was fast. Really, really fast. Henderson led baseball in stolen bases 12 times during his remarkable 25-year career, including seven seasons in a row from 1980 to 1986. Rickey wasn’t the best pure hitter on this list, but during his apex in the mid-80s and early 90s, he batted over .300 regularly. Perhaps his best season came in 1990, in which he led the league in OBP (.439) for the only time in his career and tied his career-high with 28 home runs. Henderson was promptly enshrined in the Baseball Hall of Fame in 2009 as one of baseball’s most feared base-runners ever.

Babe Ruth said Joe Jackson was “the greatest natural hitter” ever. That’s high praise from arguably baseball’s greatest hitter, and he may not be wrong. “Shoeless” Joe currently holds the third-highest batting average in league history and was an integral part of the 1917 Chicago White Sox World Series championship. However, his career abruptly ended due to his alleged involvement in one of baseball’s most heinous scandals in league history. White Sox players were accused of throwing the 1919 World Series, and Jackson was kicked out of the sport in 1920 after only his 13th season, in which he batted .382.

Who is the greatest MLB left fielder of all time?

The greatest MLB left fielder of all time is Barry Bonds. Bonds is baseball’s home run champion and instilled more fear in pitchers than perhaps anyone in history. During his heyday, Bonds was often intentionally walked because of how dangerous he was. In fact, Barry was once intentionally walked with the bases loaded during a May game in 1998, allowing a free run to be scored. He was also a great fielder early in his career, winning the gold glove eight times.

What MLB left fielder has the most career home runs?

Barry Bonds holds the record for most home runs, not just by a left fielder, but out of anyone in history with 762. The next closest left fielder is Manny Ramirez, who slugged for 555 home runs. For all his dominance, Bonds only led the league in home runs twice, but that’s largely because of how often he was intentionally walked, which took away home run opportunities.

What MLB left fielder has won the most MVP awards?

Barry Bonds won an MLB record seven MVP awards during his 22-year career, which equates to about one MVP every three seasons. No other player in league history has even reached three MVPs during their careers. However, the award wasn’t annually given out until 1931. The next highest level fielder is Ted Williams, with two MVPs.