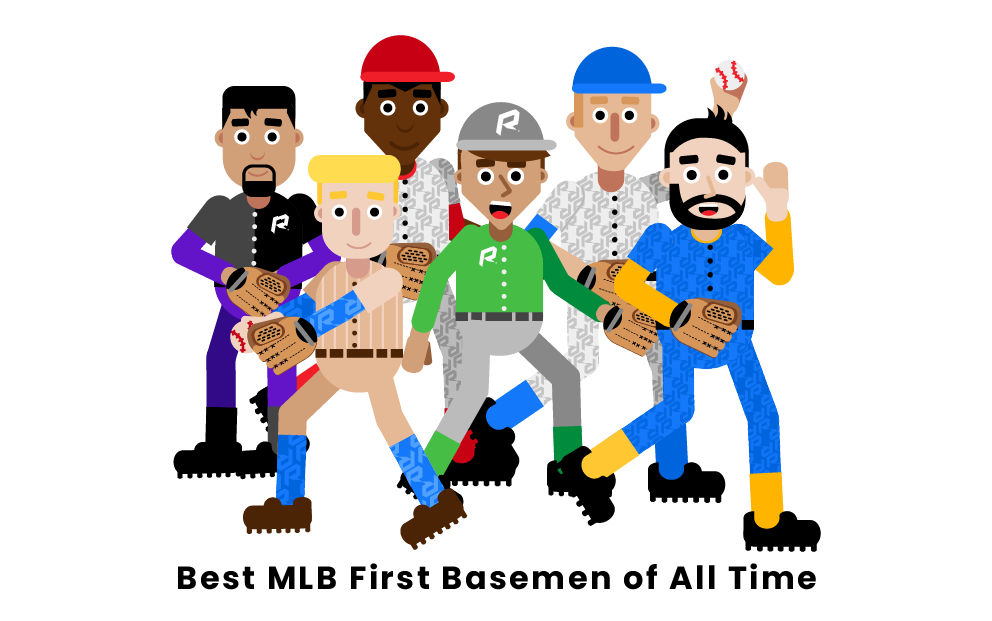 Sometimes seen as the least challenging position in baseball, the first base position has included some of the most prolific and memorable sluggers ever. The best to ever do it combined raw power with finesse and smarts at the plate to produce numbers that jump off the back of the baseball card. Below are the six best first basemen in Major League history.

Who are the best MLB first basemen of all time?

Gehrig was an absolute slugger who finished with nearly 500 home runs in his storied career and is one of the most recognizable names from one of the most famous teams in baseball, the New York Yankees. He wasn’t just a power hitter either; Gehrig posted a .340 batting average for his career and won a batting title in 1934, showcasing his generational blend of power and contact at the plate. He hit .361 in his seven World Series appearances and made the All-Star team in each of his last seven seasons. He also set the record for most games played consecutively with 2,130, which Cal Ripken Jr. would later break. Though he is associated with being one of the most well-known victims of ALS, his outstanding career ensured he will always be remembered as one of the greatest players ever to man first base.

Nicknamed “The Machine,” Pujols was perhaps the most dominant player of the mid-2000s. From 2002 to 2010, Pujols finished in the top three in MVP voting every year except for one, and he was a top-two finisher in seven of those years. His ability to be a complete hitter who combined average, power, and a good eye at the plate was unmatched during his prime. He quickly became a legend in St. Louis before signing one of the largest contracts in MLB history with the Los Angeles Angels in 2012. Since then, his production has decreased, but his legacy remains one of the most accomplished first basemen ever.

Foxx was putting up video game numbers long before video games were around. He led the league in home runs four times and also led in runs batted in three times. He was the consummate hitter, showcasing breathtaking power to go along with amazing on-base skills. In his 20 years of playing, he was named an All-Star nine times and won two World Series championships. His .609 slugging percentage is second only to Lou Gerhig on this list, and his 534 home runs trail only Pujols.

The only other active player on this list, Miguel Cabrera has been one of the best hitters in baseball over the last decade-plus. He won back-to-back MVPs in 2012 and 2013, and he also won the Triple Crown in 2013. Much like Pujols, Cabrera is an all-around slugger. He is seen as an amazing pure hitter, as he has also led the league in on-base percentage four times. Though he is closing in on retirement, Cabrera continues to be a productive batter and remains one of baseball’s most cherished personalities.

Though he only played 13 full seasons, Hank Greenberg still left his mark as one of the best first basemen in the history of the sport. In addition to winning two MVP awards, he also won two World Series rings. He spent three years serving in the Air Force from 1942 to 1944, but he still managed to smash over 300 home runs and drive in over 1,200 runs. Greenberg finished his career with more walks than strikeouts and had a career batting average of .313, good for third on this list.

Frank Thomas was one of the most imposing figures in the sport, standing at 6’5” and weighing 240 pounds. However, that’s only half the reason he was nicknamed “The Big Hurt.” The other half was in reference to the hurt Thomas imposed on pitchers throughout his 19-year career, racking up over 1,700 runs batted in and posting a career batting average over .300. Known as one of the most intimidating batters of his time, Thomas ranks tenth all-time in walks, a category he led the league in during four different seasons.

Who is the greatest MLB first baseman of all time?

The greatest first baseman of all time is Lou Gehrig. His six World Series rings are the most on this list, and his .340 career batting average is the best among first basemen. Even on the star-studded Yankees, Gehrig always stood out. He finished his career with 23 grand slams, an all-time record until it was broken just nine years ago. His absurd durability, highlighted by his previous record of 2,130 consecutive games played, only expanded upon the value he brought to his team.

What MLB first baseman has hit the most career home runs?

Albert Pujols is first amongst all first basemen in career home runs with 679, a tally that also puts him at fifth all-time currently. Pujols put up some astounding home run totals during his prime, yet he only led the league in two of those seasons. Consistency was his key to success, as he has hit at least 30 home runs 13 times in his career. While he possesses jaw-dropping power, his keen eye at the plate has also been an important factor in his performance.

What MLB first basemen has won the most MVP awards?

The record for most MVP awards by a first baseman is actually a tie held between Albert Pujols and Jimmie Foxx. Both players won the award three times during their careers. Somewhat surprisingly, Jimmie Foxx was not named an All-Star the year he won his first MVP (1924). Foxx finished in the top 10 in MVP voting six times during his career, while Pujols had 11 such seasons.