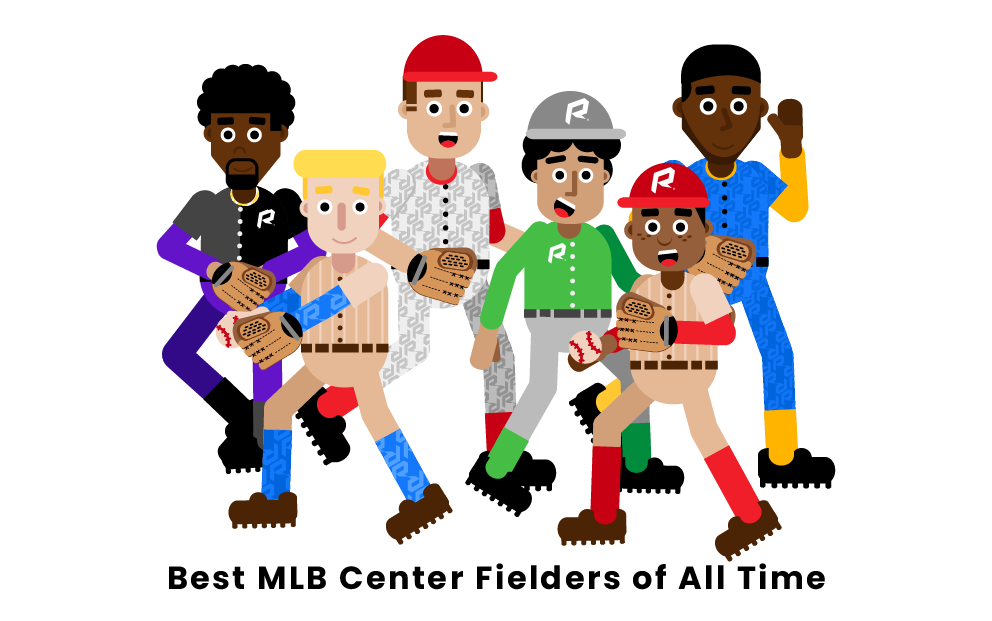 In a game constricted to batter’s boxes and baselines, the outfield in baseball requires players to cover large amounts of ground. The captain of the outfield is the center fielder, who stands in the middle of three players and is tasked with defending the biggest part of the field. Being a good defender in the outfield demands exceptional athleticism, but the best to ever do it combine skills in the field with prowess at the plate. Below are some of the top center fielders the game has ever seen.

Who are the best MLB center fielders of all time?

Willie Mays is not only seen as the best center fielder of all time but also as one of the greatest baseball players of all time by many. In an illustrious career that spanned 23 years, Mays racked up well over 3,000 hits while batting over .300. He was named to All-Star Games in 20 seasons, making a total of 24 appearances due to two games being played each season from 1959 to 1962. In addition to being a phenomenal hitter, Mays is also seen as one of the best defenders ever to play the sport. He is widely known for making one of the best defensive plays in history, “The Catch,” and won 12 Gold Glove awards during his career.

Despite being diagnosed with a bone and tissue disease in high school, “The Mick” would go on to become one of the most famous Yankees and baseball players ever. Mantle was elected to All-Star Games in 16 of his 18 seasons and won seven World Series with the Yankees. In 1956, he took home the Triple Crown after leading the league in home runs, runs batted in, and batting average. He was also known to have a good eye at the plate, as he accumulated more walks than strikeouts over his 18-year career. He is seen by many as one the greatest, if not the greatest, switch-hitters in MLB history.

Easily the most famous Detroit Tiger ever, Ty Cobb was a menace at the plate and on the basepaths. Though he never hit for much power, his ability to get on base was second-to-none. Cobb finished his career with 4,189 hits, behind only Pete Rose on the all-time list. He posted a batting average of over .400 three times during his career, one of only two hitters ever to do so. Known for his quick temper, Cobb was one of the most aggressive players of his era. He is credited with stealing home 54 times, far more than anyone else in the history of the sport.

The son of former Major Leaguer Ken Griffey Sr., “Junior” made sure to leave his mark on the game. Nicknamed The Kid, Griffey Jr. played with an undeniable swagger that won over the affection of fans from across the country. He is widely credited with having helped save baseball in Seattle during his time as a Mariner, and his ability to dominate all aspects of the game was truly special. Ever the showman, Griffey Jr. won three Home Run Derbys during his career and has a highlight reel of defensive plays. Many say he had one of the smoothest swings the game has ever seen, but there was a power behind it that drove him to be one of the greats.

When people think of DiMaggio, the first thing that comes to mind is “The Streak.” However, the lifetime Yankee was more than just a one-trick pony. Despite only playing 13 years, DiMaggio was able to clobber 361 home runs and over 2,000 hits, and he was named an All-Star in every season he played. DiMaggio took three years off from baseball during his prime to serve in World War Two but was able to maintain the same Hall of Fame level of play once he returned. Playing during a golden era of Yankees baseball, DiMaggio goes down as one of the greats for both the franchise and the sport as a whole.

Though he’s ranked last on this list as of now, there’s a very good chance Mike Trout passes some of the other players mentioned by the time he hangs up his cleats. Trout has won three MVP awards despite only having played eight full seasons thus far. He burst onto the scene in 2011 with a number of flashy defensive plays, but he has since turned into one of the most complete hitters in the sport. Seen as the face of baseball for the past decade, there’s no doubt Trout is one of the best all-around players ever to touch the diamond.

Who is the greatest MLB center fielder of all time?

The greatest MLB center fielder of all time is Willie Mays. Not only has Mays hit the most home runs ever by a center fielder, but he was also an elite defender who possessed top-end speed. The “Say Hey Kid” will forever go down as one of the greats, and some even believe he is the greatest player ever in the history of the sport. His 24 All-Star appearances are also the most amongst all center fielders in MLB history.

What MLB center fielder hit the most career home runs?

Willie Mays hit the most career home runs by a center fielder with 660. The most home runs he hit in a season was 52 during the 1965 campaign, and he hit 40 or more home runs six times. He is widely regarded as one of the best power hitters to ever play the game despite not having the largest frame.

Who is the best center fielder in the MLB today?

The best center fielder in the game right now is Mike Trout. For many, he is seen as the best player in the sport regardless of position. Though he has never won a Gold Glove, Trout is respected as an elite defender and is also one of the most efficient base stealers in the game today. Trout has already won three MVPs in his career and could quite possibly have another decade of baseball left in him.