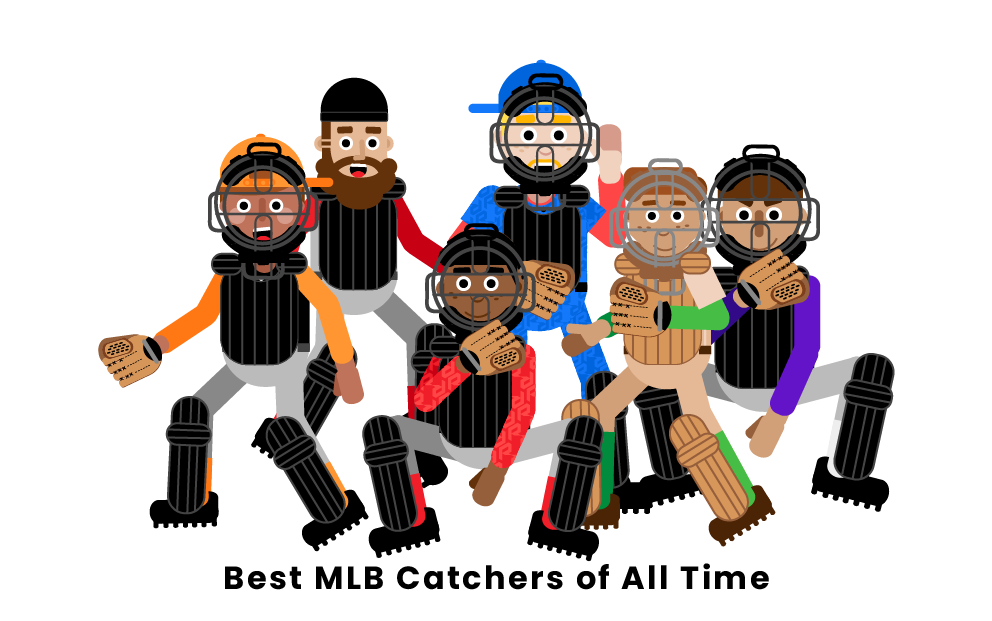 Catchers are one of the most important defensive positions in baseball. So much so that, throughout the history of the MLB, teams have often sacrificed offensive production at the position in favor of defensive prowess. However, some catchers have excelled at both fielding and batting, solidifying themselves as legends of the game. Read on to learn about the six greatest catchers in Major League Baseball history.

Who are the best MLB catchers of all time?

Johnny Bench made his MLB debut in 1967 with the Cincinnati Reds. It didn’t take long for Bench to break out, as he won the National League’s Rookie of the Year award in 1968, along with his first Gold Glove. He went on to play his entire 17-season career with the Reds, where he would change how the catcher position was perceived forever. His defensive skills were unparalleled, and the strength of his arm would have baserunners think twice about attempting a steal. He can back this sentiment up with the ten Gold Gloves he won throughout his career. Bench paired his extraordinary defense with elite offensive production as a batter. He set the Reds’ franchise records for home runs (389) and RBIs (1,376), which still stand today.

Lawrence Peter “Yogi” Berra made his MLB debut in 1946 with the New York Yankees. During his 18-season tenure with the Yankees, Berra helped the club win an astounding ten World Series championships. This set an MLB record for most World Series won by an individual player. This record still stands today and is unlikely to ever be broken. Berra’s contributions to the team’s success were reflected through his 11 All-Star Game selections and three MVP awards won. Berra was known as a defensive workhorse at the position, leading the American League in games caught eight seasons in a row (1950-1957). In 1965, he ended his career on a four-game stint with the crosstown New York Mets.

Carlton Fisk made his MLB debut in 1969 with the Boston Red Sox. He is considered one of the most consistent and durable catchers ever to play the position and wasted no time letting his presence be known. In 1972, in his first full season, he became the first player from the American League to win the Rookie of the Year award unanimously. He went on to have a twenty-four-season career playing for both the Boston Red Sox and Chicago White Sox. Fisk’s durability was proven when he set an MLB career record of playing 2,226 games at catcher. Even with all of his career accolades, Fisk is best remembered for hitting one of the most iconic home runs of all time. In Game 6 of the 1975 World Series, the Red Sox were down 3-2 in the series versus the Reds. The game was tied at 6-6 in the bottom of the 12th inning when Fisk came up to bat. He launched a dramatic walk-off home run into left field to win the game for the Red Sox and force the World Series to a winner-take-all Game 7.

Mike Piazza made his MLB debut in 1992 with the Los Angeles Dodgers. Over the course of his 16-season career, Piazza also played for the Florida Marlins, New York Mets, San Diego Padres, and Oakland Athletics. His best seasons came in Los Angeles and New York. Piazza is often considered one of the best offensive catchers in MLB history and excelled in hitting for both power and average. He hit 30 home runs in nine different seasons and finished his career with 427 (399 while playing catcher), a record amongst all catchers. Piazza coupled his power with a career .308 batting average. He is one of just nine catchers in MLB history to have a career batting average of .300 or higher. Piazza will go down as one of the ultimate underdog stories in MLB history, having gone from being a 62nd round draft pick selected 1,390 overall to being immortalized in the National Baseball Hall of Fame.

Iván “Pudge” Rodríguez made his MLB debut in 1991 with the Texas Rangers. The long-time Ranger also spent time playing for the Florida Marlins, Detroit Tigers, New York Yankees, Houston Astros, and Washington Nationals. Throughout his twenty-one-season career, Rodríguez built a nearly immaculate resume. His offensive abilities were backed by winning seven Silver Slugger awards and the 1999 American League MVP. In his 1999 MVP season, Rodríguez batted .332 while hitting 35 home runs and racking up 113 RBIs. Rodríguez was also one of the best defensive catchers ever and famous for his elite arm strength. Rodríguez led all catchers in caught-stealing percentage nine times, and in eight seasons, he caught more than half of the baserunners who tried to steal against him. This helped him to collect an astounding thirteen Gold Glove awards, which is the most ever won at the catcher position. Rodríguez was also the most reliable catcher to ever play in the MLB. He surpassed Carlton Fisk’s record of career games played at catcher, with a total of 2,543 behind home plate. Rodríguez’s ability to dominate as both a batter and fielder over a long career makes him one of the most well-balanced catchers in MLB history.

Josh Gibson made his professional baseball debut in 1930, playing in one game for the Memphis Red Sox of the Negro National League. Gibson resumed his professional career in 1933 with the Pittsburgh Crawfords of the Negro National League. Gibson is regarded as one of the best offensive catchers to ever play baseball. He led the Negro National League in home runs eleven times and RBIs seven times. Gibson paired his legendary power with an astounding .374 career batting average. His dominance across all hitting categories helped him to win the Triple Crown twice. Gibson was also credited with being a solid defensive catcher. He had natural skills such as a powerful arm and quick release, which made him highly effective at throwing out baserunners. Gibson was acknowledged for his impressive career statistics and achievements in 1972 when he became the second player from the Negro leagues to ever be voted into the National Baseball Hall of Fame.

Who is the greatest MLB catcher of all time?

Johnny Bench is widely considered the greatest MLB catcher of all time. His ability to excel at both hitting and fielding completely changed how the position was perceived. As a batter, Bench was a pure power hitter. He set the record for most career home runs by a catcher, hitting 327. Bench also led the MLB in RBIs three times, further proving his offensive talent. He was also known for his incredible arm strength behind home plate. He set the National League record for career putouts and won ten Gold Gloves in ten consecutive seasons. Bench’s well-balanced talent helped the Cincinnati Reds win two World Series championships and earned him two NL MVP awards. His legacy will live on forever in Cooperstown, NY, after being inducted into the National Baseball Hall of Fame in 1989.

What MLB catcher has won the most MVP awards in baseball history?

The most MVP awards won by a catcher is a tie between Yogi Berra and Roy Campanella. Each player won the award three times throughout their respective careers. Berra and Campanella’s combined six make up a third of all 18 times a player from the catcher position has won the MVP. Historically, it is less likely for a catcher to win the award. This is due to many teams trading-off offensive production in exchange for defensive talent at the catcher position. MVP voters do take defensive performance into account but are much more likely to vote for players with outstanding offensive statistics.

What MLB catcher has won the most gold glove awards in baseball history?

Iván Rodríguez has won the most Gold Glove awards at the catcher position, with a total of 13 throughout his MLB career. This is an incredible career achievement due to the catcher position being historically known for strong defense. In order to win a Gold Glove at catcher you must have strong arm strength, fast reactions to block wild pitches, and be skilled at framing pitches. Rodríguez’s landmark will be extremely difficult for another catcher to surpass. Yadier Molina currently has the most active Gold Gloves won by a catcher with nine. However, he has announced that he plans to retire after the 2022 season.

Pages Related to Top 6 Best MLB Catchers of All Time