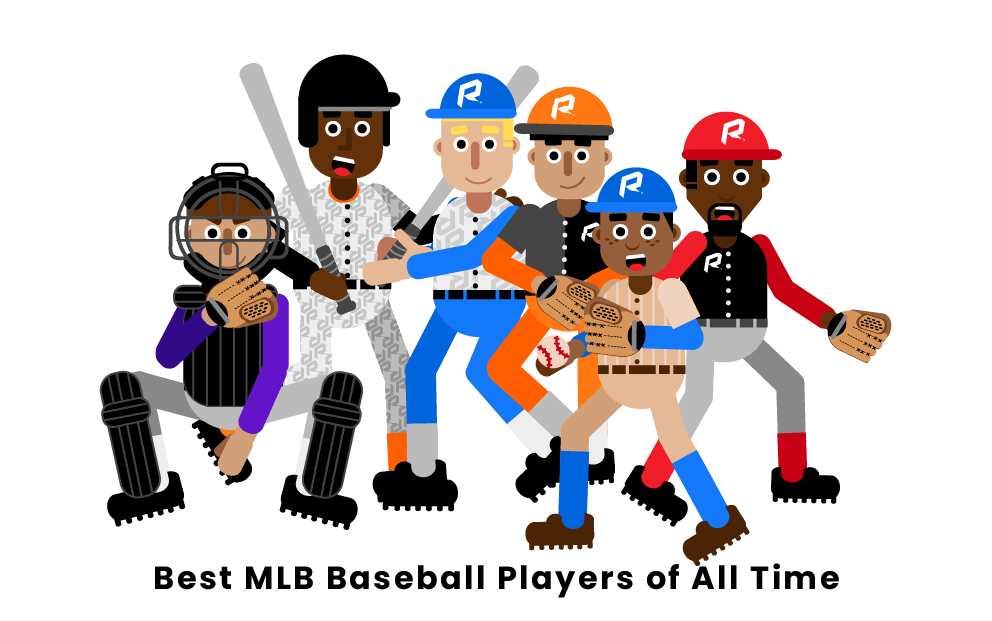 Baseball is a complex sport with many different facets to the game, including hitting, pitching, and fielding. Different players field different positions and subsequently have different skill sets. Nonetheless, certain players can transcend their position to be known as all-time greats. Read on to learn about six of the greatest players ever to be a part of the MLB.

Who are the best MLB baseball players of all time?

George Herman Ruth Jr. is one of the most well-known players in MLB history, despite the fact he retired in 1935. Babe, as he was better known, played 22 seasons in Major League Baseball. In these seasons, Ruth helped redefine the game of baseball and increased the popularity of the sport immensely due to his productive bat and big-swing mentality. Ruth set the record for most home runs in a single season four separate times, with quantities of 29, 54, 59, and 60, effectively doubling the record over the course of his career. He has the best career OPS (on-base plus slugging), the 13th best batting average of all-time at .342, and he drove in the second-most runs in MLB history with 2,213 career RBI. All of this should firmly put Ruth in the greatest player conversation; however, he also excelled as a pitcher early in his career. Ruth set the record for the most consecutive scoreless innings pitched in the World Series at 29.7 innings before it was later broken by Whitey Ford.

Barry Bonds is one of the most controversial athletes in the entire world due to his immense success and the methods he used to obtain that. Bonds is one of the greatest all-around players with over 500 stolen bases, eight Gold Gloves, and the most home runs, walks, and intentional walks in MLB history. At the age of 36 in 2001, Bonds went on to set the single-season record for home runs with a total of 73. The greatness of Bonds comes into question when Performance-Enhancing Drugs (PEDs) are introduced. There are a number of links between Bonds and PED use in some form or another over the course of his career, which many people argue diminishes his career feats. These PED links are likely the source of Bonds’ omission from the Baseball Hall of Fame, despite his numerous accolades.

Ted Williams is another one of the greatest players in MLB history who played his final game long before free agency even existed. Williams recorded one of the most remarkable feats in baseball history when he took off three seasons in the middle of his prime to serve the military during World War II and returned to win the MVP his next season. Williams also won the Triple Crown twice in his career, which ties him for the second-most all-time. The three seasons Williams missed happened to be during his prime from ages 24-26, which resulted in his still impressive career marks being slightly lower than many other MLB legends. Williams has the 15th most RBI of all-time, 20th most home runs of all-time, and 14th most Wins Above Replacement.

Willie Mays is one of the greatest all-around players in MLB history that regularly impressed as a five-tool athlete. Mays is one of the best fielders in MLB history and earned the 6th most Gold Glove Awards of all time, with a total of 12. His glove allowed him to save the eighth-most runs all-time in the field over the course of his career. In 1971, Mays was recorded to be the best runner in the National League that season when he stole 23 bases at the age of 40. He also won a batting title, two All-Star Game MVPs, and finished in the top seven of regular-season MVP voting a total of eight times, in addition to his two MVP wins.

Ken Griffey Jr., often known for his smooth swing, is one of the greatest what-ifs of all time, as he missed approximately 392 games in the final ten years of his career. The Kid, as he was known, posted some of the best hitting seasons in MLB history when he remained healthy, leading the American League in home runs four times between 1994-1999. Unlike many other players of his era, Griffey Jr. has never been seriously connected with PED use, which allows his records to be simply admired and not questioned. He is also one of two players to finish their career with more than 600 home runs and ten Gold Gloves, along with Willie Mays.

Henry “Hank” Aaron is one of the greatest hitters that ever stepped onto an MLB field, finishing his career with more runs batted in than any other player. Aaron was an icon partially for his baseball skills and partially for how he handled the adversity he faced due to the racial divides in the United States. Until Bonds later broke the record, Aaron led a remarkable chase after Babe Ruth’s career home run record, which he would finally break in 1974. A huge reason that Aaron was able to break Ruth’s unbreakable record was due to the consistency of his greatness. Aaron had a stretch during his career that resulted in him hitting more than 20 home runs for 20 consecutive seasons.

Who is the greatest MLB baseball player of all time?

There is no singular answer to who the greatest MLB player of all time is. The argument can be made for Ruth and his outlandish power numbers that still stand nearly a century later, but he played when the MLB was segregated. The case for Bonds is significantly weakened at the mention of his PED usage. While Williams and Griffey Jr. posted some incredible individual seasons, their slightly lower career totals make their argument hinge upon a what-if. Mays did it all, just not to the same dominant extent at the plate. Aaron holds or is close to the leader of many records, but career totals cannot be the only measure of success when the player has had one of the longest careers ever.

What MLB player holds the record for the most World Series rings won?

What MLB player holds the record for the most career home runs?