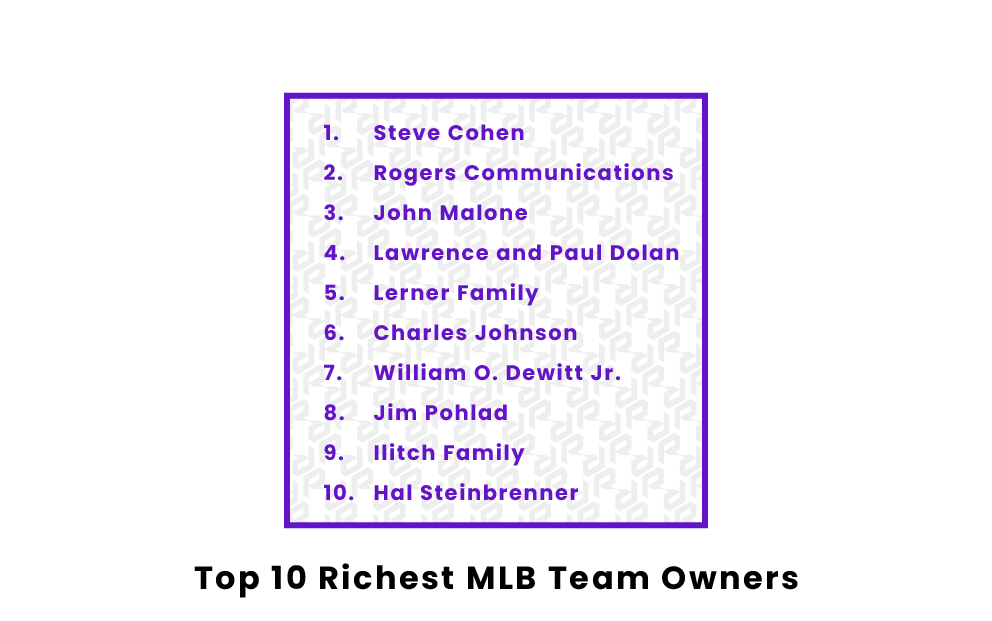 Like other businesses and companies, Major League Baseball (MLB) teams have owners who are at the head of the team. While they may not directly run any specific part of the team, they oversee all aspects of the team and provide the money necessary for the team to function. The 30 MLB owners have a wide range of net worths, from $400 million to $16 billion. Below, the 10 richest owners are ranked and discussed.

Who Are The Richest MLB Owners Currently?

The richest owner in the MLB, Steve Cohen, is in charge of the New York Mets and has a net worth of around $16 billion. Cohen is one of the newer owners in the league, becoming the majority owner of the Mets in 2020.  The vast majority of his wealth has come through his hedge fund companies. His first hedge fund was SAC Capital, which he launched in 1992, and it eventually gained control of over $14 billion in assets. Unfortunately, the company was found guilty of insider trading and had to shut down. This led Cohen to launch a new hedge fund, Point72, which he still runs today. Lastly, Cohen has a great interest in the arts, owning over $1 billion in his art collection.

The owner of the Atlanta Braves, John Malone has a net worth of approximately $6.6 billion. Malone is also the chairman of Liberty Media, Liberty Global, and Liberty Interactive, through which he gained ownership of the Braves. Prior to his work with Liberty Media, Malone was the president and CEO of Tele-Communications Inc. (TCI) from 1973-1996. Along with his business ventures, Malone is a huge investor in real estate. He passed Ted Turner as the largest private landowner in the United States in 2011, currently owning 2.1 million acres of land. The vast majority of his land is located in Maine.

A father-son combination, Lawrence and Paul Dolan are the majority owners of the Cleveland Guardians and have a shared net worth of about $4.6 billion. The father of the duo, Lawrence Dolan, earned the majority of his wealth from his stock in the company Cablevision, of which his brother Charles is the majority owner. As for his son Paul, he started out as a partner at an Ohio-based law firm before moving over to the Guardians as a vice president and general counsel in 2000. Eventually, Paul would work his way up to become the club’s president. In 2013, with his father aging, the MLB voted to name Paul as the primary controller of the Guardians.

Although they are looking into selling their team, the current owner of the Washington Nationals is the Lerner Family, which has a net worth of around $4.5 billion. Ted Lerner helped to earn the family its fortune when he turned a $250 loan into one of the biggest real estate companies in the United States. Today, Lerner Enterprises has one of the largest real estate holdings in the Washington D.C. area. Since he was aging, Ted transferred control of the Nationals to his son Mark in 2018. In April of 2022, Mark announced that the family was looking into either selling the team or adding new investors.

Charles Johnson takes the next spot on this list, as his net worth is approximately $4.4 billion. Johnson has owned the San Francisco Giants since 1993. Charles showed off his leadership and business skills after he took over his father's company, Franklin Templeton Investments, in 1957. When he became the company’s CEO, Franklin Resources, as it is also known, had about $2.5 billion in assets. When Johnson retired in 2013, the company was managing over $800 billion in assets. Upon his retirement, he continued the family tradition and passed control of the company to his son, George Johnson.

With a net worth of an even $4 billion, William Dewitt Jr. is the owner of the St. Louis Cardinals. Dewitt was born into a successful baseball family, as his father, Bill Dewitt, was a longtime MLB executive. Along with his business partner, Stephen Brauer, William purchased his hometown Cardinals team in 1995 from Anheuser-Busch. While the Cardinals are his main focus, he also has stock in other baseball teams, including the Baltimore Orioles, Cincinnati Reds, and Texas Rangers, and also owns shares in the Cincinnati Stingers hockey team. As for his business side, Dewitt has invested in Spectrum 7, a petroleum company, and the U.S. Playing Card Company.

The eighth-richest owner on this list is the owner of the Minnesota Twins, Jim Pohlad, whose net worth is estimated to be $3.8 billion. Jim is one of three brothers who inherited their father’s company, the Pohlad Companies. Their father, Carl Pohlad, was a self-made billionaire, and his company is made up of over 30 businesses in the Minneapolis area. Their businesses cover a wide array of areas, from banking to robotics to real estate. Jim and his two brothers took over the company after their father’s passing in 2009. Jim has been the owner of the Twins for far longer, however, as he has owned the team since 1984.

Another family ownership group, the Ilitch family owns the Detroit Tigers and has the same net worth as Jim Pohlad at around $3.8 billion. Mike and Marian Ilitch made the majority of their money by founding the famous fast-food restaurant chain Little Caesars Pizza in 1959. Ironically, they purchased the Tigers in 1992 from the owner of their pizza joint rival, Dominos. Unfortunately, Mike passed away in 2017, but Marian still owns Little Caesars. As for the Tigers, they are currently in a family trust with the Ilitch family. The Ilitch family also owns another one of Detroit’s major pro sports teams, the Detroit Red Wings hockey team.

The final owner on this list, Hal Steinbrenner also has a net worth of $3.8 billion and is in charge of baseball’s most storied franchise, the New York Yankees. Hal is the son of the Yankees’ previous owner, the famous George Steinbrenner. When his father passed away in 2010, Hal and his brother Hank inherited ownership of the team. The brothers had actually taken over control of the team three years earlier when George Steinbrenner relinquished control of the team to him due to his poor health. Unlike most of their fellow owners, Hal and Hank do not have many outside business ventures, so the majority of their wealth comes from the Yankees.

Below is a list of the other 20 richest owners in Major League Baseball, listed in alphabetical order.

Who is the richest MLB Team owner?

New York Mets owner Steve Cohen purchased the team in 2020 and has a net worth of around $16 billion. Most of Steve’s wealth has come from his two hedge funds: the now defunct SAC Capital and Point72. He also owns close to $1 billion in his art collection. Steve has over $5 billion more in net worth than the second richest owner, Rogers Communications.

Who is the youngest MLB Team owner?

At 52 years old, Hal Steinbrenner is the youngest principal owner of an MLB team. Hal has been the youngest owner since he became one with his father’s passing in 2010. As for the youngest person to own any stock in an MLB team, Kansas City Chiefs quarterback Patrick Mahomes owns a part of the Kansas City Royals. Mahomes is just 27, and he was just 24 when he made the purchase, making him the youngest partial owner in MLB history.