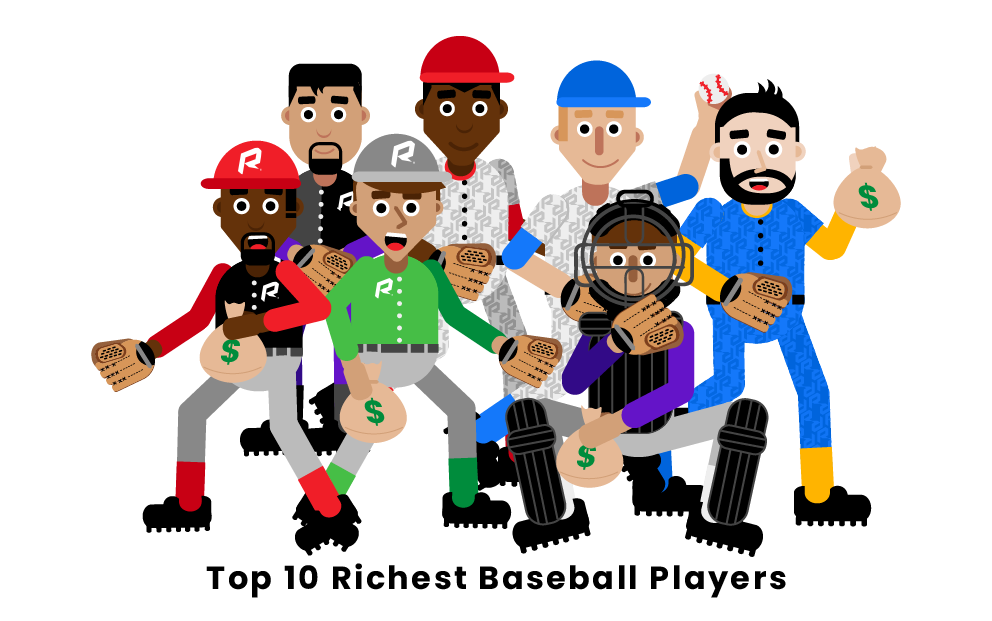 Baseball, America’s Game, is a staple of the American sporting scene. As a result, the game’s stars are compensated handsomely for their skills and abilities. Read on to learn about the top ten richest baseball players of all time.

Who are the richest baseball players of all time?

Alex Rodriguez is currently the wealthiest baseball player, with a net worth of $350 million. Nicknamed “A-Rod,” Alex is a former Major League Baseball player. He played professionally for 22 seasons with the Seattle Mariners, Texas Rangers, and most notably, the New York Yankees. A-Rod is regarded as one of the greatest baseball players of all time, retiring with record-setting career statistics, including a .295 batting average, over 600 home runs, over 2,000 RBIs, and over 300 stolen bases. Rodriguez was a 14-time MLB All-Star, 3-time American League MVP, and World Series Champion in 2009. He earned an estimated $450 million in salary throughout his career, on top of numerous endorsement deals with Nike and other corporations that add to his value. A-Rod is also the owner of multiple companies, most notably A-ROD Corp, and continues to broadcast baseball for Fox Sports and ESPN.

Derek Jeter is the second richest baseball player of all time, with a net worth of $185 million. He is a former professional baseball player that played for the New York Yankees. Jeter was the team’s shortstop for twenty seasons, spanning from 1995 to 2014. He earned an estimated $266 million in salary during his career. Jeter continued his financial success through endorsement deals with Nike, Ford, Mastercard, and more. He also became a co-owner of the Miami Marlins in 2017 and served as their CEO until 2022, at which point he stepped down from his position due to disagreement regarding team budgeting and also sold his shares in the team. Throughout Derek Jeter’s professional career in the MLB, he was a 5-time World Series Champion, 14-time All-Star, Rookie of the Year, and World Series MVP. He also had his #2 retired by the Yankees and was inducted into the Baseball Hall of Fame in 2020.

Ichiro Suzuki is an international baseball icon and the third richest baseball player ever. His current net worth is estimated at $180 million. Born in Japan, Suzuki started his career in the Japanese Nippon Professional Baseball league, then progressed to play in Major League Baseball for 18 years, 14 of which were spent with the Seattle Mariners. He was an outfielder that collected an impressive amount of accolades throughout his time in the MLB, most notably being a 10-time All-Star, AL Most Valuable Player, AL Rookie of the Year, 10-time Gold Glove Award winner, among other awards. Ichiro endorsed numerous Japanese brands throughout his long playing career, including Kirin Brewery, Mizuno Corporation, and Sato Pharmaceutical. He also had deals with U.S. companies Upperdeck and Majestic Athletic to further boost his earnings. Ichiro retired in 2019, ending his nearly 27-year, high-paying career.

Albert Pujols is the fourth richest baseball player, with a net worth of $170 million. He currently plays first baseman and is a designated hitter for the Los Angeles Angels. Previously, Pujols played for the St. Louis Cardinals for eleven seasons and built an impressive resume. With the Cardinals, he was a 3-time NL MVP, 9-time MLB All-Star, and 2-time World Series Champion. In 2012, Pujols signed a ten-year, $240 million deal with the Angels, one of the most lucrative deals at the time. He has earned an estimated $298 million from salary throughout his career, on top of endorsement deals. His most notable endorsement was a deal with Nike that paid him around $700 thousand in 2019.

Miguel Cabrera, nicknamed “Miggy,” is the fifth richest baseball player with a net worth of $125 million. Originally from Venezuela, Cabrera made a name for himself in the MLB and currently plays first base for the Detroit Tigers. Throughout his career, Cabrera has been recognized as a two-time AL MVP, 11-time All-Star, World Series Champion, and MLB Triple Crown winner, among other awards. In 2008, he signed an eight-year, $152 million deal with the Tigers. Once that deal expired, he immediately inked a new deal with the team in 2008, paying him $248 million over the next eight years. While Cabrera doesn’t have as many endorsements as other players, his smaller endorsement deals are estimated to earn him around $200,000 a year. Maltin Polar, Franklin, Wilson, and New Balance are among companies that endorse Cabrera to further increase his career earnings.

Ryan Howard, a former Phillies star, is currently the sixth richest baseball player with a net worth of $120 million. Howard played at first base for the Phillies for twelve seasons from 2004-2016. Throughout his career, he was an NL Rookie of the Year, NL MVP, three-time All-Star, and World Series Champion. He signed a huge five-year, $125 million contract in 2010 with the Phillies, but his playing time was cut short by injuries. While Howard’s career wasn’t as long as other players on this list, he made up for this with tons of endorsement deals. He represented companies including Subway, New Balance, and Franklin Sports, adding an estimated $500,000 per year to his earnings.

Zack Greinke is the 7th richest baseball player in the world, with a net worth of $120 million. He is a talented pitcher that has played for six MLB teams throughout his career, the Royals, Brewers, Angels, Dodgers, Diamondbacks, and Astros. Greinke has been a 6-time All-Star, Cy Young Award winner, and 6-time Gold Glove winner during his Major League career. In 2022, Greinke signed a one-year, $13 million dollar deal with the Kansas City Royals. He does not have many public endorsement deals, but his enormous contacts have more than made up for that. Greinke has earned over $277 million from his salary alone throughout his 18-year career, which is still ongoing.

Chipper Jones is a former third baseman for the Atlanta Braves and the eighth richest baseball player with a net worth of $110 million. He played with the Braves for nineteen years, had his #10 retired by the team in 2013, and was welcomed into the National Baseball Hall of Fame in 2018. Throughout his professional career, Jones was an NL MVP, 8-time MLB All-Star, and World Series Champion in 1995. Despite his hall of fame career, Chipper’s largest contract was only $90 million. He made up for that with enormous endorsement deals and real estate investments. Jones’ largest endorsements included Wendy’s, Mizuno, and Coca-Cola. With the length of his career in baseball, even a modest salary paired with endorsements and investments have been more than enough to keep Chipper Jones on the list of wealthiest baseball players for years.

Joey Votto is a Canadian professional baseball player for the Cincinnati Reds and is currently the ninth richest baseball player, with a net worth of $110 million. He has been the first baseman for the Reds since being drafted in 2007. Votto has put together a great career; some highlights of his career are his recognition as a 6-time MLB All-Star and the NL MVP in 2010. His earnings have come from a handsome salary throughout his career, coupled with big-time endorsement deals with Nike and Rawlings. In 2014, Votto signed a ten-year, $225 million contract extension with the Reds and makes around $25 million per year from the team.

Manny Ramirez is the tenth richest professional baseball player, with a net worth of approximately $110 million. The Dominican-American had an excellent career in the MLB before going overseas to play in the Chinese Professional Baseball League and Australian Baseball League. Ramirez played for numerous Major League teams, but his most notable tenure was with the Boston Red Sox. In his 19 years in the MLB, he was recognized as a 12-time All-Star, 2-time World Series Champion, and World Series MVP, among other awards. Ramirez earned an estimated $229 million in salary throughout his career in the MLB, in addition to endorsement deals with EA Sports and television appearances that have helped build his impressive net worth.

Joe Mauer is a retired major league catcher with an estimated net worth of $100 million. Mauer spent the entirety of his 14-year career with the Minnesota Twins and is indisputably one of the greatest players in franchise history. He racked up a long list of accomplishments and accolades, including retiring as a six-time All-Star, 2006 American League MVP, three-time batting champion, and five-time Silver Slugger Award winner. Mauer was also the first catcher to win the American League batting title, with an average of .365, and holds the record for the most batting titles won by a catcher in MLB history. His dominance on the field resulted in his number 7 being retired by the Twins following his retirement.

Justin Verlander is an active MLB pitcher worth an estimated $95 million. Verlander spent the majority of his career playing for the Detroit Tigers before joining the Houston Astros in 2017. He is an eight-time MLB All-Star and led the league in strikeouts in five of his seasons. Verlander was an instrumental part of the Houston Astros’ World Series win in 2017.

Felix Hernandez is a retired professional baseball pitcher with an estimated net worth of $90 million. Hernandez was a six-time MLB All-Star during his time with the Seattle Mariners and won the American League Cy Young in 2010. He threw the most recent perfect game in MLB history on August 15th, 2012. Although he doesn’t make as much off the field, he has had endorsement deals with Pepsi and 2KSports.

How do baseball players make their fortunes?

Salary payments, endorsement deals, and business ventures outside of baseball are the most common ways for professional baseball players to earn their fortunes.

The salary negotiated in players’ individual contracts forms a large portion of their net worth, especially since many baseball players are able to play for well over ten years. Lucrative endorsement deals can also significantly boost the earnings of star baseball players. Endorsement deals earn players anywhere from thousands to millions of dollars annually from their sponsors. Additionally, some athletes choose to invest their earnings in business ventures before their careers have even ended. If quality investments are made, this can also boost their wealth.

Who is currently the highest paid baseball player in the MLB?

Currently, Mike Trout is the highest paid baseball player in the MLB. He signed a record-breaking contract extension with the Los Angeles Angels in 2019, earning him $426.5 million over the next twelve years. Trout currently makes around $37.7 million each year. Gerrit Cole is the second highest paid MLB player, signing a nine-year, $324 million deal with the Yankees. He is the highest paid pitcher, making around $36 million per year.

Players like Mike Trout, Gerrit Cole, and Bryce Harper have recently made headlines for signing the most lucrative contracts in MLB history. Many fans wonder why these players aren’t in the conversation amongst the richest baseball players. The reason for this is that these players’ contracts have not yet matured, meaning that they are still at the beginning of their deals and haven’t actually earned the full amount yet. Additionally, players will spend a good portion of their earnings throughout their careers, so salary does not directly transfer into overall net worth. As time goes on, this list will surely change as these players reach the end of their contacts.

Do baseball players make more than other professional athletes?

Baseball players are known to make an exceptional salary compared to professional athletes in other sports. Baseball is the second highest paying professional sport in the world, with professional basketball players earning slightly more. The average salary of an NBA player is $4.9 million, while the average MLB player earns $3.82 million per year. Recently, baseball players have signed some of the largest contracts in sports history. Notably, Mike Trout’s $426 million deal and Bryce Harper’s $330 million deal are two of the top five largest sports contracts of all time.