Top 10 MLB Rivalries of All Time 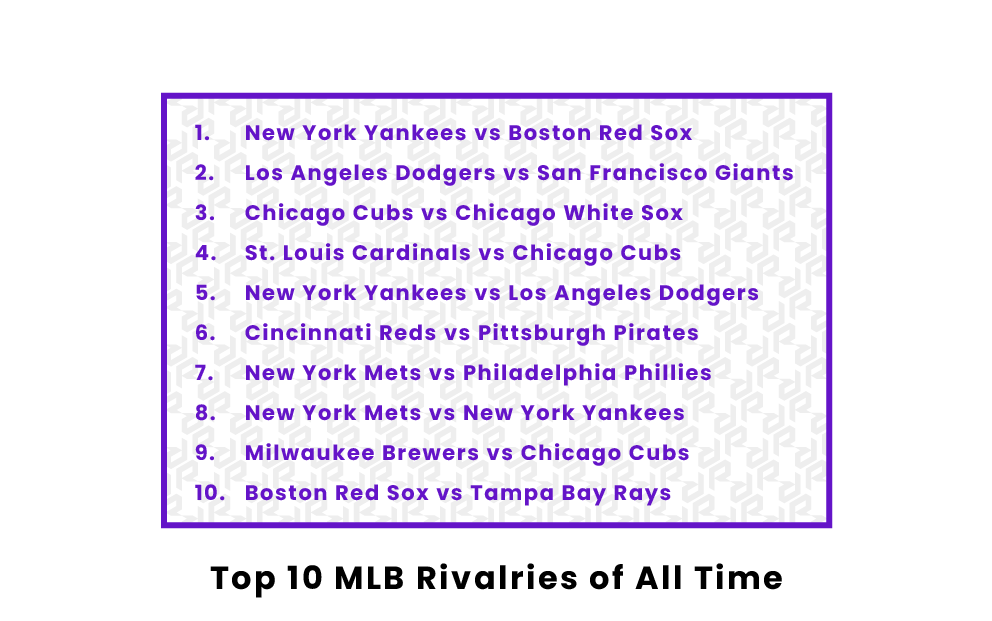 Baseball is commonly referred to as "America's Pastime," drawing fans and viewers from across the country to watch intense matchups between teams who have been dominating the diamond for decades. Naturally, the great love for baseball across America has led to the creation of many rivalries between various teams in Major League Baseball (MLB). Many of these rivalries have existed for decades and still lead to bombastic performances from players and fans alike.

What are the biggest MLB rivalries of all time?

Undoubtedly, the greatest and most well-known rivalry in Major League Baseball exists between the New York Yankees and the Boston Red Sox. This infamous feud began in 1919, when Red Sox owner Harry Frazee, in the midst of financial troubles, sold star Red Sox player Babe Ruth, now considered to be one of the greatest baseball players of all time, to the Yankees for $125,000. The decision was widely considered a bad move by Red Sox fans. It later became the subject of the infamous "Curse of the Bambino," an 86-year championship drought that directly followed Babe Ruth's trade to the Yankees. Red Sox fans believed that losing Babe Ruth cursed their team, making it impossible to win a World Series, while the Yankees flourished for decades after the trade, winning 26 World Series titles and signing dozens of Hall of Fame-level players. The Red Sox made it to the championship game many times after 1919, but it was not until 2004 that the team finally won another World Series, "breaking" the long and frustrating curse. Despite the end of the infamous curse, however, the Red Sox and Yankees still consider themselves archenemies. Their fans are extremely vocal in support of their teams, leading their rivalry to be an undisputed contender for the greatest baseball rivalry of all time.

The Dodgers-Giants rivalry is perhaps the oldest in Major League Baseball. Los Angeles and San Francisco have a rivalry that stretches back to 1889 when they faced off against each other in the World Series. Back then, both teams hailed from New York but moved together to California in 1958. Nonetheless, their rivalry continued, with both teams facing off for some memorable moments over the years and drafting memorable players. Among the most famous moments in the rivalry's history came in 2004, when the Dodgers were two games ahead in the division with two left to play. In the decisive game of the series, the Dodgers were on the verge of losing their lead with a 3-0 deficit in the ninth inning. Still, they managed a huge comeback, including a walk-off Grand Slam by Steve Finley, to win the game and the National League West Division Title.

The rivalry between the Cubs and the White Sox is most notable because both teams share the home city of Chicago. With such a large and vibrant community to support them, it seems inevitable that the Cubs and the White Sox would be rivals, and support for them has long divided the Windy City into two competing camps. Since both teams are in different divisions, the Cubs in the National League Central and the White Sox in the American League Central, it is possible for the two teams to face each other in the World Series. This dynamic has led to many great moments and has even come close to shutting down the entire city of Chicago thanks to its intensity. One memorable moment occurred on May 20th, 2006, when Cubs catcher Michael Barrett punched White Sox player A.J. Pierzynski in the face after Pierzynski ran him over at home plate, causing a bench-clearing brawl.

Though the two Chicago teams have a great rivalry, the Cubs have an arguably greater rival in the form of the St. Louis Cardinals. Cubs fans largely consider St. Louis to be their biggest enemies, and the rivalry has existed for over 130 years. The rivalry is centered around geography, as the city of St. Louis, Missouri is located right on the border of Illinois. Many fans from Illinois are fans of the Cardinals instead of their hometown Cubs, causing a conflict between citizens of the state over support for Chicago or St. Louis. Multiple showdowns between players have marked the rivalry over the years, such as brawls in the 1960s and 1970s between Fergie Jenkins of the Cubs and Bob Gibson of the Cardinals, or the famous fight between the Cardinals' Al Hrabosky and the Cubs' Bill Madlock in September of 1974. A more recent moment between the two teams came in 2019 when the Cardinals defeated the Cubs to advance to the playoffs in a four-game streak, their first four-game streak against the Cubs since 1921.

A long-standing rivalry between the New York Yankees and the Los Angeles Dodgers goes back to the 1940s and the 1950s, when the two teams played each other multiple times in the World Series. First playing each other in 1941, the two teams met 11 times in the World Series, so often that many fans began to find their repeated faceoffs boring. However, after 1981, the rivalry cooled off, and the Yankees and Dodgers have not quite regained their intense competition. After enduring many bad trades and missteps in the late 20th century, the Dodgers slowly began to lose steam as a prominent team in the MLB, while the Yankees continued to be a powerful juggernaut. Nonetheless, the old rivalry between the two teams remains strong.

Both hailing from Midwestern American cities, the Cincinnati Reds and the Pittsburgh Pirates have formed a rivalry over the years primarily due to the devotion of their fans. Established in the 1880s, both teams are among the oldest in the MLB, and their prominence has risen and fallen together over the years. In the 1960s and 1970s, both teams went back-and-forth winning National League titles, after which they both suffered a slump in the 1980s. Cincinnati and Pittsburgh came back in the rankings during the 1990s, but again suffered losses during the 2000s. These ups and downs have led to a great rivalry between the two teams, as the opposing cities see themselves as competitors. One memorable moment in the rivalry occurred in 1990, when during a six-game series, the Pirates' Carmelo Martinez hit a ball to deep right field, which seemed to be a home run, but was miraculously caught over the fence by Reds' player Glenn Braggs.

The rivalry between the New York Mets and the Philadelphia Phillies is one of the more intense rivalries in baseball. Coming from two bordering states and prominent American cities, the two teams seem like natural enemies, and their rivalry has included many great moments over the years. With both teams in the same division, they often compete for division titles. One of the more exciting competitions came in 2007, when the Phillies came back from a multi-game deficit against the Mets to win the National League East Division in a series against the Washington Nationals. Another vital moment in the rivalry was the departure of Phillies' player Billy Wagner, who left the team and later joined the Mets with a $45 million contract, criticizing the Phillies and becoming one of their most hated former players. The Mets-Phillies rivalry has even been mentioned in famous media, with a fictional game between the two teams being mentioned in the hit sitcom "Seinfeld" in 1992.

Another inter-city rivalry, the competition between the New York Mets and the New York Yankees, is also well-known among baseball fans. The two teams were the foundation of inter-league play, an idea proposed by the MLB late in the 1990s, but their rivalry extends long before that. From 1963 to 1983, the two New York teams faced off every year in an exhibition game known as the "Mayor's Trophy," bringing New York fans together to cheer on their respective teams. After inter-league play began, the rivalry between the teams grew, reaching a height in the year 2000, when they faced off in the World Series. The Yankees came away with the championship in five games, but the series was known for its competitiveness, with none of the five games won by more than two runs.

A relatively newer rivalry in baseball, the feud between the Milwaukee Brewers and the Chicago Cubs is yet another geographical competition. The short distance between the two teams' home stadiums, Wrigley Field for the Cubs and American Family Field for the Brewers, has led many Cubs fans to attend Brewers games and Brewers fans to keep Cubs fans out. The Brewers have even attempted to stem the tide of Chicago fans by offering presale tickets which can only be purchased using a credit card with a Wisconsin ZIP Code. Since the early 2000s, the rivalry has led to some memorable moments, such as an 11-inning game on April 7th, 2017, and another in June of 2018.

Though many consider the Red Sox and the Yankees to be the ultimate baseball rivalry, the feud between the Red Sox and the Tampa Bay Rays may beat it in terms of intensity. Boston and Tampa Bay are known for having a "brawling" rivalry, and the two teams have been notably prone to fistfighting in their many years of facing each other. Multiple well-known melees have occurred in Red Sox-Rays games. One notable fight occurred between Red Sox pitcher Pedro Martinez and Rays player Gerald Williams in August of 2000, after Martinez hit Williams with a pitch, causing the benches to clear. Another notable fight occurred in June of 2008, when Red Sox center fielder Coco Crisp punched Tampa's starting pitcher, James Shields, after storming the mound in response to being hit by a pitch. A huge brawl ensued, leading to the ejection of both Crisp and Shields. The two teams have faced off in the playoffs multiple times, most notably in the 2008 ALCS that saw the Rays come out on top and make it to the World Series for the first time in franchise history.

What is the biggest MLB rivalry?

The biggest MLB rivalry is undoubtedly the feud between the Boston Red Sox and the New York Yankees. Beginning with the infamous 1919 trade of Babe Ruth from Boston to New York, the rivalry lasted throughout Boston's 86-year World Series drought, which was matched by the Yankees' meteoric rise and domination of almost 30 World Series titles. Since breaking their "curse" in 2004, the two teams are still bitter rivals, and their games are among the most highly-attended in all of Major League Baseball.

What is the oldest MLB rivalry?

The oldest MLB rivalry is the rivalry between the Los Angeles Dodgers and the San Francisco Giants, which began in the late 1880s when they faced off in the 1889 World Series. Both teams were originally from New York and later moved to the West Coast, though their rivalry persisted. The two teams have played each other well over 2000 times, and their rivalry in the old days was so great that world-renowned Dodgers player Jackie Robinson chose to retire rather than be traded to the Giants.

What top MLB rivals can meet in the World Series?

Pages Related to Top 10 MLB Rivalries of All Time