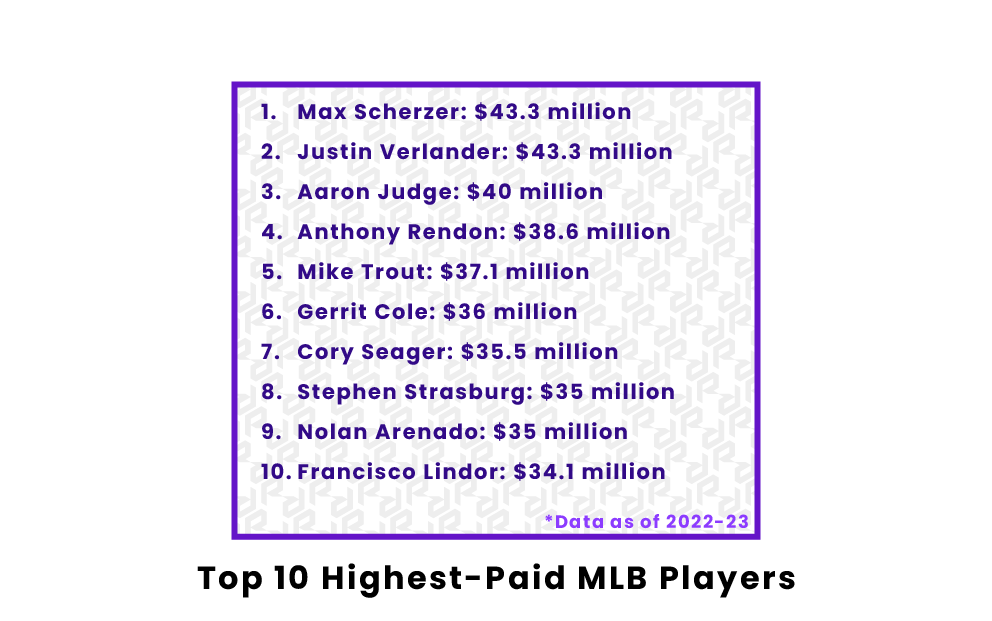 Major League Baseball has long been famous for players receiving some of the most expensive contracts in all of sports. It’s not uncommon for some of the sport’s biggest stars to sign multi-year contracts that are in the hundreds of millions, but for the purposes of this list, their pay will be measured by the amount of money they are making for the 2022-23 season.

Who are the Highest-Paid MLB Players in the World?

As of 2022, Max Scherzer makes $43.3 million per year playing for the New York Mets. Without a doubt, Max Scherzer is one of the best pitchers of the 2010s. He won a total of three Cy Young awards, which are awarded to the two best pitchers in the MLB each year. He also was voted an All-Star eight times and has thrown two no-hitters in his career. Scherzer’s big paydays with the Mets have been well-earned.

Playing for the New York Yankees, Gerrit Cole is paid $36 million per year for his incredible pitching skills. Like Scherzer, Cole is also a starting pitcher and one of the best in the game. Cole is one of the strikeout masters in baseball, evidenced by his 300-strikeout season in 2019, which was only the 18th time a pitcher reached the 300 mark in a season. In 2019, the Yankees signed Cole to a whopping $324 million dollar contract to be paid out over nine seasons.

As the center-fielder for the Los Angeles Angels, Mike Trout is paid $35.5 million per year. Mike Trout is one of the biggest names in all of baseball, and he is paid as such. Trout has won the American League MVP award a whopping three times and has played in the All-Star Game 10 times. He has a career batting average of .303 and 350 home runs to his name. His current contract is for $426 million over the course of 12 years.

Carlos Correa gets paid $35.1 million per year as a member of the Minnesota Twins. Carlos Correa earned such a large payout partially as a result of his time as a member of the Houston Astros, during which he won the 2017 Rookie of the Year award, played in two All-Star games, and won the World Series with the team in 2017. The Twins signed Correa to a three-year contract that’s worth $105.3 million, good for fourth-best in the MLB.

As a starting pitcher for the Washington Nationals, Stephen Strasburg makes $35 million per year from a contract that’s worth a total of $245 million to be paid out over the course of seven years. Some of Strasburg’s accomplishments to warrant such a deal include being a three-time All-Star, having a 3.24 career ERA, and being crowned the World Series MVP in 2019, all with the Nationals. It was Strasburg’s excellence and consistency that earned him such a hefty contract.

Like his former teammate Stephen Strasburg, Anthony Rendon makes $35 million per year as a member of the Los Angeles Angels. Rendon earned such a sizable contract (seven years at $245 million) from his time at the Washington Nationals. Rendon was a key member of the 2019 World Series-winning Nationals squad. It was a year in which Rendon led the MLB in runs batted in. That year he also made it to his first All-Star Game.

Francisco Lindor’s contract dictates that he makes $34.1 million every year. Lindor is one of the premier shortstops in all of the MLB, having hit for a .277 average over the course of the year and earning many accolades, such as two Gold Gloves, 2 Silver Sluggers, and even a Platinum Glove award. He has also made four appearances at the All-Star Game. The New York Mets have Lindor on a 10-year contract for a total of $341 million.

Trevor Bauer is one of the most dominant starting pitchers in the major leagues and as such, makes $34 million per year. Bauer’s dominance has earned him multiple awards, such as a Cy Young in 2020, an All Star game appearance in 2018, and a place on the All-MLB first team in 2020. The Los Angeles Dodgers signed him to a three-year, $102 million contract. With 1,416 total strikeouts, Bauer commanded a large contract which the Dodgers were able to give to him. However, due to his ongoing legal troubles over a potential sexual assault case, Bauer stands to lose nearly $60 million in salary as a result of him not playing in the MLB for a year during his case, so his position on this list is subject to change.

Playing for the Texas Rangers, Corey Seager earns $32.5 million every year. Since entering the MLB in 2016, Corey Seager has been one of the best shortstops in the game. He won NL Rookie of the Year in his debut season and made the All-Star game that season as well. He continued his success in the following years, becoming both the NLCS and World Series MVP in 2020. For these efforts, Seager earned a 10-year, $325 million deal with the Rangers.

Nolan Arenado makes $32.5 million per year as the third baseman for the St. Louis Cardinals. Nolan Arenado has been one of the most exciting players of the 2010s, not only for his efforts on offense but also on defense. He has nine Gold Glove awards, along with five Platinum Gloves. He’s also earned the prestigious Wilson Defensive Player of the Year Award three times. In addition to his astounding defensive skills, Arenado has led the NL in home runs three times and in RBIs two times.

Who is the highest-paid MLB Player?

The highest-paid MLB player is Max Scherzer of the New York Mets, who is paid $43.3 million every year for his role as a starting pitcher. Scherzer agreed to a whopping $130 million contract to be paid out over the course of only three years. In terms of the amount he makes per year, it’s the most lucrative contract in MLB history, which Scherzer earned from his pitching dominance that amounted to three Cy Youngs, two no-hitters, and a World Series championship.