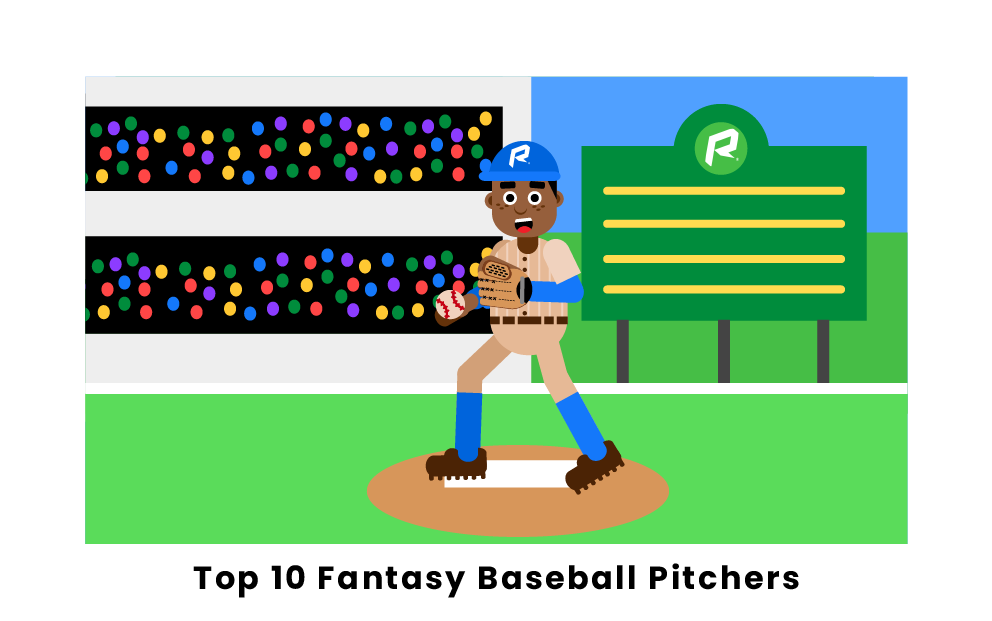 Who are the most popular Top 10 Fantasy Baseball Pitchers?

Gerrit Cole is considered to be one of the best fantasy baseball pitchers going into the 2020 MLB season. Cole had a positive start to his career with the Pittsburgh Pirates as the 1st overall pick in the 2011 MLB draft. After being traded to the Houston Astros in 2018, Cole began to take his game to another level.

In the 2019 MLB season, Cole led the American League (AL) in ERA (2.50), strikeouts (326), and Ks/9 (13.8). He was recognized as an AL All-Star, receiving the title of AL Pitcher of the Month three consecutive times, and was named to the All-MLB First Team last year. Cole's 2019 winning streak with the Houston Astros was the longest streak maintained by a pitcher in a year since 1912.

As Cole begins a new chapter as a member of the New York Yankees in 2020, he is expected to be the top pitcher drafted across all fantasy platforms heading into the season.

Jacob deGrom has had a promising start to his MLB career and ranks as one of the most talented starting pitchers that has debuted at the age of 26 or older. After being drafted in 2010 by the New York Mets, deGrom took four years to make it to the Majors and won the National League (NL) Rookie of the Year award in his first season.

During the 2019 MLB season, deGrom recorded 2.43 ERA with a 0.97 WHIP and 255 strikeouts. He was selected as an NL All-Star and made the All-MLB First Team. He also received his second consecutive NL Cy Young award, which is granted to the best pitcher in the league each year.

DeGrom's 2020 outlook pegs him as the 2nd overall fantasy draft pick. He is arguably the safest and most consistent pitcher to choose for the upcoming season.

Max Scherzer has consistently been one of the top fantasy baseball pitchers over the last decade. Scherzer was selected as the 11th overall pick by the Arizona Diamondbacks in the 2006 MLB draft. Since his arrival in Washington in 2015, Scherzer has been an elite pitcher and led the team to a World Series Championship last season.

In 2019, Scherzer had an ERA of 2.92 with 1.03 WHIP and 243 strikeouts. He has remarkable pitching control and has maintained an ERA below 3.0 since joining the Washington Nationals. He received his 5th consecutive NL All-Star nomination last season and was named to the All-MLB First Team.

Despite his older age and injury history, Scherzer is expected to be one of the first pitchers selected in the 2020 fantasy draft with his pitching statistics on an upward trajectory.

Justin Verlander is expected to have yet another strong season in 2020 with very few people ranked ahead of him. Verlander was selected as the 2nd overall pick by the Detroit Tigers in the 2004 MLB draft. Now a pitcher for the Houston Astros, he gets a lot of time on the mound with more innings logged over the past three seasons than any other pitcher in the MLB.

Verlander's 2019 season was one of his best yet with an ERA of 2.58 and 300 strikeouts. His WHIP of 0.80 was also the best of his career. Verlander was an AL All-Star and received the AL Cy Young award last season.

The delayed 2020 season has benefited Verlander as a Spring Training injury would have sidelined him at the start of the season. He now remains at the top of the fantasy boards with the expectation of being drafted in the first round.

Walker Buehler could likely end the 2020 MLB season as the top fantasy pitching starter in the league. Beuhler was drafted in 2015 in the first round by the Los Angeles Dodgers and has been a crucial asset for the team ever since.

In the 2019 season, Buehler pitched 3.26 ERA with 1.04 WHIP and 215 strikeouts. He ended the season with a 14-4 record after seeing a dramatic increase in playing time from the previous season. He was named an NL All-Star last season after securing an outstanding 29% strikeout rate and 5% walk rate.

In the upcoming shortened season, Beuhler is expected to earn more appearances on the mound. He is an extremely promising young player with potential to win games with sub-2.50 ERA and 250+ strikeouts for the season.

Shane Bieber's success in his 2019 season has earned him a spot as a top starting fantasy pitcher in 2020. Bieber was drafted in 2016 by the Cleveland Indians and has proven to be a breakout player for the team. His ability to remain poised during performances has been his greatest strength.

During the 2019 season, Bieber excelled with 3.28 ERA with 1.05 WHIP and 259 strikeouts. He carefully honed his curveball and slider last season, which contributed to his skillful improvement. Not only did the young player become an AL All-Star, but he was also named the All-Star MVP.

Bieber is forecasted as the 6th overall pitcher to be selected in the MLB draft. He is expected to immensely improve during the 2020 season if he can continue to maintain his elite control.

Jack Flaherty is certainly a contender for one of the top 10 fantasy pitchers in the 2020 MLB draft. Flaherty was drafted in 2014 in the 1st round by the Saint Louis Cardinals and has been on the team ever since. The young pitcher has earned more time on the mound over the last two years and has continued to improve drastically.

Flaherty's 2019 season was a rollercoaster to say the least. During the first half of the season, he had 4.64 ERA with 1.23 WHIP across 97 innings. In the second part of the season, Flaherty soared to 0.91 ERA with 0.71 WHIP across 99.1 innings. He was a two-time NL Pitcher of the Month over this period and made the All-MLB Second Team.

Flaherty's historic performance in the second half of the 2019 season solidifies his spot in the top 10 fantasy pitcher draft. The young player is expected to continue evolving and growing his skill set amongst the very best pitchers in the MLB.

Stephen Strasburg is a name to watch after a strong 2019 MLB season. The Washington Nationals selected Strasburg as the 1st overall pick in the 2009 draft and he is currently a valuable member of the team. He was a key player in helping the Nationals win the World Series Championship over the Houston Astros last season, while also securing the World Series MVP.

In 2019, Strasburg had 3.32 ERA with 1.04 WHIP across 209 innings. He managed a career high 251 strikeouts, and he led the National League in wins and innings pitched. Strasburg was recognized as an All-MLB First Team member and received the Babe Ruth Award for best postseason performance.

Although Strasburg has had a fairly inconsistent career, his 2019 performance earns him a top 10 starting pitcher spot in 2020.

Mike Clevinger checks all of the boxes for a top 10 starting pitcher in the 2020 MLB draft. He was drafted in 2011 by the Los Angeles Angels and has since been traded to the Cleveland Indians. He has constantly struggled with injury throughout his career, but he still managed to pull off a great 2019 season.

Last season, Clevinger had 2.71 ERA with 1.06 WHIP and 169 strikeouts across 126 innings. He featured 3 or more pitches led by a 96 mph fastball and followed by an A-list slider. Clevinger was also awarded AL Pitcher of the Month in August last season after coming off of an injury.

Clevinger appears to be facing no limitations as he enters the 2020 season and is expected to be in the mix for the top 10 pitchers in the draft.

Patrick Corbin narrowly squeezes into the top 10 starting pitchers of the 2020 draft. Corbin was drafted in 2009 by the Los Angeles Angels and has since become part of the "Big 3" on the Washington Nationals, alongside Shcerzer and Strasburg. He helped lead the team to victory over the Houston Astros for the 2019 World Series Championship.

During the 2019 season, Corbin had 3.25 ERA with 1.18 WHIP and 238 strikeouts. This was a tremendous follow up from the breakout season that he had in 2018. He was also given the Warren Spahn Award for the best left-handed pitching in MLB baseball.

Corbin is an extremely consistent pitcher that is deemed a safe and elite player to choose in the latter draft rounds. He is expected to be a solid starter for a fantasy rotation that can give you an advantage over the competition.

Who are the top 10 pitchers in MLB?

Who are the best pitchers in baseball to date?

Christy Mathewson (1900-1916) is considered to be one of the greatest pitchers of all time with 2.13 ERA and 2,507 strikeouts across 4780.2 IP. Walter Johnson is another legendary pitcher with 2.17 ERA and 3,509 strikeouts across 5,914.1 IP. Other renowned pitchers include Pedro Martinez, Greg Maddux, Cy Young, and Roger Clemens.