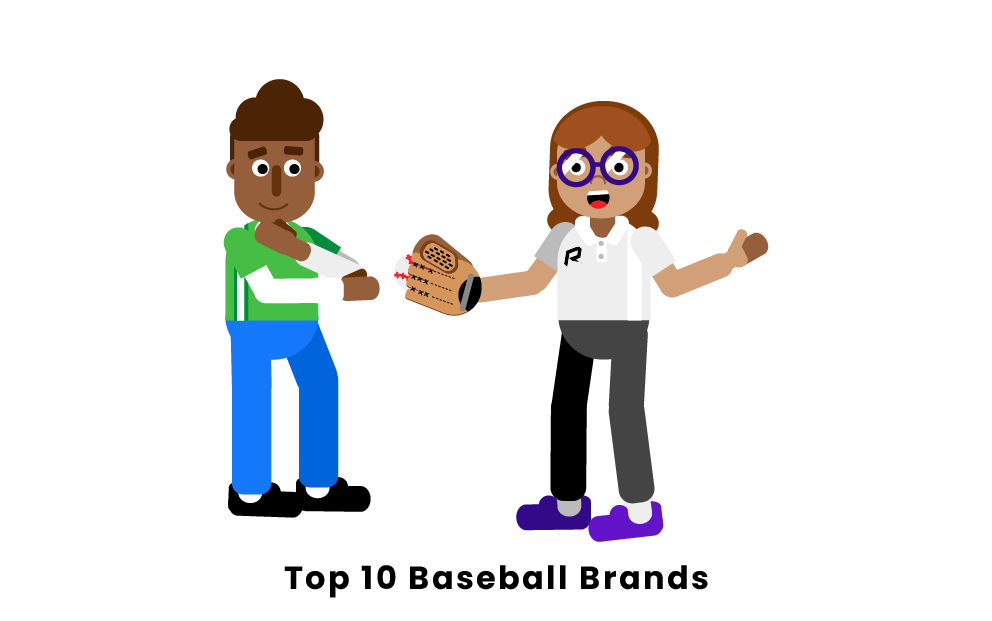 Baseball fans and players have various brands they can choose from when it comes to equipment and clothing. Which ones are tried and true? This article compiles a list of the most popular baseball brands for players to choose from.

What are the most popular baseball brands?

Adidas is a trendy brand for baseball athletes with a focus on their cleats. They are known for their shoes across many sports, including basketball, football, baseball, and soccer. Adidas became the new name of the German company in 1949, primarily focusing on soccer cleats. It was not until recently they began creating and selling baseball cleats. Many major league players have sponsorships with Adidas, including stars like Kris Bryant, Xander Bogaerts, and Fernando Tatis. Adidas has deals with many colleges and universities, including Louiseville, Kansas, Miami, and Indiana.

Baseball players of all ages enjoy buying and trying out DeMarini, as the brand is known for producing high quality aluminum bats since its creation in 1989. High school players can use aluminum or wood, while professionals are limited to wood bats. DeMarini offers bats that can be custom made, as well as clothes pertaining to baseball and softball. They also sell batting gloves, helmets, and many other accessories. The company does not have sponsorship deals with professional baseball players as their league can only use wooden bats. DeMarini has many sponsorship deals with colleges for baseball, including Arizona State University, University of Michigan, Penn State University, and Vanderbilt University.

Easton covers every corner of the baseball world by selling all the necessary baseball equipment a player can use. They sell equipment like bats, batting gloves, fielding gloves, catchers gear, bags, and clothing items. They sell bats for all ages of baseball players to inspire athletes to continue playing. They also sell equipment for fastpitch and slow pitch softball. Easton was originally founded as a manufacturer of bow and arrows over 40 years ago but has changed to center their work around baseball equipment of any kind. Easton changed the way people viewed aluminum bats, as their bats were made lighter, more durable, and produced better results than their competition. Easton sponsored players include Jose Ramirez of the Cleveland Indians, Alex Bregman of the Houston Astros, and Justin Turner of the Dodgers. There are many colleges and universities that are a part of Team Easton. Some of the top college programs on this team include Coastal Carolina University, Clemson University, University of California Los Angeles, and Texas A&M University.

Marucci is a popular brand for baseball players of all ages as they specialize in making exquisite bats and custom made fielding gloves. Other than baseball, Marucci makes bats and gloves for fastpitch and slowpitch softball. Marucci was founded in 2004 by two former big league baseball players. Within their 15 years of production, Marucci has grown to be one of the top bat brands for professional baseball players in the MLB. In 2021, 22.59% of all players used Marucci bats in MLB games, including Freddie Freeman, Trea Turner, Josh Donaldson, and Gleyber Torres. Along with professional sponsorships, Marucci sponsors many colleges and their NCAA baseball teams. These colleges include Gonzaga University, University of Memphis, Louisiana State University, and Baylor University.

Mizuno is a popular brand across many sports, particularly with baseball players. They are known for their aluminum bats and fielding gloves. Mizuno also sells other baseball items, including batting gloves, cleats, clothing, and catcher's equipment. Mizuno also sells fastpitch and slowpitch softball gear. The Mizuno company was created by two brothers in 1906 but did not start their production of baseballs and gloves until 1913. Mizuno is based out of Japan and has won many awards for the products they have made for over a century. Many major league players use Mizuno, including Stephen Piscotty, Ian Desmond, and Adam Wainwright. Mizuno also partners with NCAA baseball colleges to use their bats and other equipment. One major sponsor that Mizuno has is Long Beach State University.

New Balance is a popular brand in professional baseball due to the comfortable cleats  they make for athletes. New Balance does not sell bats, batting gloves, or fielding gloves for baseball players. Their focus is to provide cleats to their athletes, with over 42 pairs that a player can buy on their website. New Balance was established in 1906 as a shoe company that made shoes to support people whose jobs forced them to be on their feet all day.They evolved into a running shoe company but later expanded their empire to include shoes for all sports, including baseball, basketball, hiking, and tennis. New Balance has shoe deals with a few professional baseball players including former MVP winner Jose Altuve and phenom shortstop Fransisco Lindor. These athletes are great people to sponsor New Balance as they are well respected within the league and garner attention from people in their home countries. New Balance also currently sponsors Boston College.

Nike is one of the most popular brands when it comes to general sports shoes and apparel. They have reached into every sports market to try to be as diverse as possible with who they sell to. Because of this, Nike has expanded to sell baseball cleats and other baseball items including clothing, batting gloves, and fielding gloves. Nike was founded in 1964 as a shoe company mainly focused around sneakers. As they grew, they expanded their inventory and have recently become a part of the professional baseball world. Nike has recently entered into a contract that gives them exclusive rights to make MLB player’s jerseys. This means that for the next ten years all jerseys worn in the MLB will come from Nike. Nike also has partnerships with many professional baseball players, including Mike Trout, George Springer, Max Scherzer, and Nolan Arenado. Nike currently holds three of the top five largest apparel contracts in collegiate sports with Ohio State University, University of Texas, and University of Michigan.

Rawlings is a top baseball brand making some of the best fielding gloves in the game for all positions. However, they are also involved with manufacturing bats, balls, and other equipment and apparel. Rawlings can make custom gloves for any athlete, as many major league players enjoy having gloves above the competition. Rawlings even sponsors the Golden Glove Awards in the MLB, which is given to a top defensive player. Rawlings was created in 1887 as a sporting goods store. In 1902, the company transitioned to focusing their work on baseball gloves and equipment. In 2021, 59% of MLB starters used Rawlings gloves. Some of these players included Bryce Harper, Javier Baez, Ronald Acuna Jr., and Mike Trout. Rawlings has sponsorships with many colleges around America, with their flagship college being the University of Virginia, whose players wore Rawlings gloves when they won the 2015 College World Series.

Wilson is a popular and beloved company by baseball players of every age. Wilson specializes in many sports, but when it comes to baseball, they are most well known for their gloves. Other than baseball, they also make sporting balls for all major sports. Wilson was founded in 1913 and by the middle of the century they became the leading sports goods manufacturer in the United States. In 2018, Wilson gloves were worn by 27% of the players in the major leagues including Ozzie Albies, Mookie Betts, Juan Soto, and Clayton Kershaw. Wilson also has sponsorships with many colleges across NCAA baseball including University of Alabama, University of Florida, Clemson University, and University of Miami.

Sam Bat is a bat manufacturer that has picked up steam since its founding in 1997. The brand is best known for introducing maple bats to the game of baseball, a revolution in the bat industry. A wide range of baseball legends have used Sam Bat as their choice of lumber through the years, including Albert Pujols, Miguel Cabrera, Barry Bonds, and Jose Canseco. Today, Sam Bat offers a variety of different products, including a wide range of custom bats, stocks bats, apparel, and training bats.

While not necessarily the most household name in the realm of baseball equipment today, Nokona has a long track record in baseball. Specifically, the brand has outfitted hundreds of MLB players with their gloves through the years. Their offering of baseball gloves spans all positions, with each made with an emphasis on quality. The prestigious list of MLB players to use Nokona gloves during their careers includes Nolan Ryan, David Ortiz, Vladimir Guerrero, and Miguel Cabrera. Today, the brand still sells baseball gloves, and Nokona is also involved in the production of baseball belts.

Under Armour is a titan in the sporting goods industry, and baseball is no exception. The brand produces a variety of different pieces of baseball equipment, including cleats, batting gloves, belts, and pants. Their batting gloves are particularly popular, with MLB stars such as Bryce Harper and Wander Franco sporting them on the diamond. While they’re better known for their prominence in sports like football and basketball, Under Armour is without a doubt a major player in the baseball equipment industry as well.