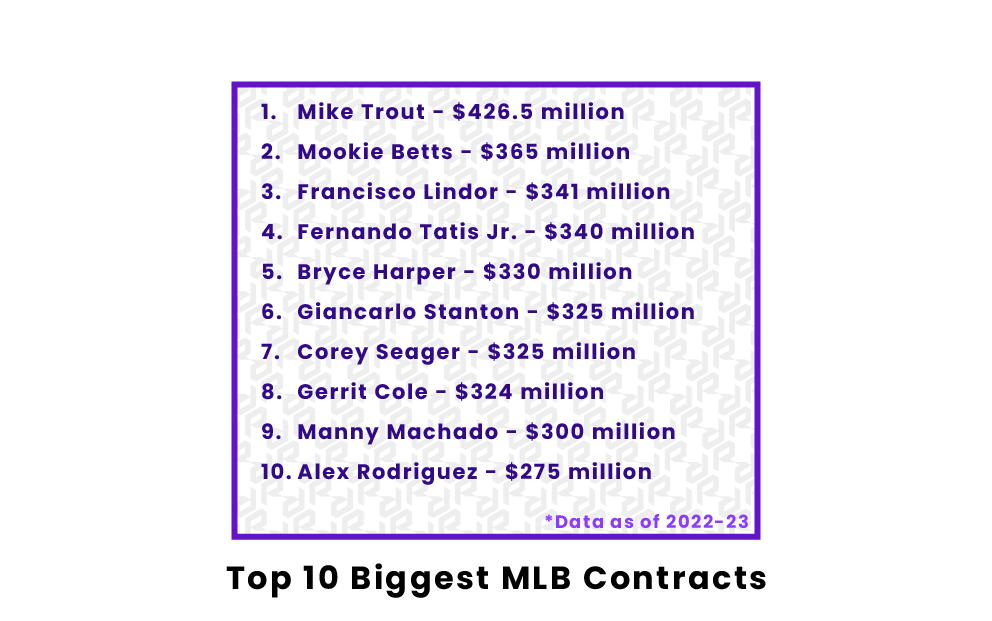 MLB contracts are not limited by a salary cap, unlike the contracts of many other major league sports. As a result, their star players are paid handsomely. This list details the top 10 biggest MLB contracts of all time, nine of which are at least $300 million.

What Are the Biggest MLB Baseball Contracts of All Time?

Trout is paid $35.5 million per year, putting him among the highest-paid athletes in all of sports. The investment is not misplaced, however. Trout is one of the best MLB players of all time.

Mookie Betts’ 12-year, $365 million contract is the second biggest in MLB history. This signing came after Betts and David Price were traded to the Los Angeles Dodgers in exchange for Alex Verdugo, Jeter Downs, and Connor Wong.

Mookie Betts won a World Series in 2020 with the Dodgers, giving Los Angeles a solid return on their investment. Betts did his part in the championship run, exceeding already high expectations.

Francisco Lindor has the third-biggest MLB contract, coming in at $341 million. Lindor’s deal is 10 years long, and he signed it as a 27-year-old. Lindor, a former eighth overall selection in 2011, signed his deal on March 31st, 2021.

Lindor signed the deal a couple of months after being traded from Cleveland to New York. The Mets gave up Andres Gimenez, Josh Wolf, Isaiah Greene, and Amed Rosario in exchange for Lindor and Carlos Carrasco.

On August 12th, 2022, Tatis was fined $2.5 million from his 2022-23 salary for violating the MLB’s performance-enhancing drug policy. Along with the fine, Tatis was suspended for 80 games. This was unfortunate timing for Tatis and the Padres, as the club had just acquired superstar Juan Soto when Tatis was suspended.

Bryce Harper earned the fifth spot on this list by signing a 13-year deal with the Philadelphia Phillies on February 28th, 2019. Harper’s massive deal pays him more than $25 million per season and will keep him employed through the 2031 season.

Harper is a former number one overall pick: in 2010, the Washington Nationals selected him first. Harper has racked up 1379 hits and 285 home runs in 1383 career MLB games.

Giancarlo Stanton has the sixth-biggest contract in MLB history. Stanton signed this deal as a 25-year-old, back in 2014. The contract is 13 years long, paying exactly $25 million a year.

Cory Seager, a shortstop, signed a $325 million contract as a 27 year old in November of 2021. Seager was drafted 18th overall in the first round of the 2012 MLB draft. Seager signed the deal with the Texas Rangers after spending his first 7 MLB seasons with the Dodgers.

Seager was the National League rookie of the year in 2016 and made the All-Star game in both of his first two seasons in the MLB. Seager and the Dodgers won the World Series in 2020, and Seager was honored as the World Series MVP.

Gerrit Cole was drafted by the New York Yankees but opted to go to college rather than sign a contract. After a dominant collegiate career, Cole was drafted first overall by the Pirates. Cole played his first five MLB seasons with the Pittsburgh Pirates before being traded to the Houston Astros. Then, following the 2019 season, Cole finally landed in New York.

Manny Machado has the ninth-biggest contract in MLB history at $300 million. Machado was drafted third overall back in 2010 by the Baltimore Orioles. Machado spent six seasons in Baltimore before being traded to the Los Angeles Dodgers. Machado then spent the 2018 season in LA before signing a 10-year deal with San Diego in February 2019. Machado has 1596 hits and 283 homers in 1445 career MLB games.

Alex Rodriguez, nicknamed “A-Rod,” has the 10th and final spot on this list thanks to the $275 million contract he signed with New York in December of 2007. A-Rod, the oldest player on this list, was drafted first overall in 1993 by the Seattle Mariners.

A-Rod spent most of his career as a New York Yankee, where Rodriguez had a friendly rivalry with teammate Derek Jeter over the years. The Yankees won just one World Series while A-Rod was with them, in 2009.

Who has the biggest MLB contract currently?

Who has the biggest MLB contract by annual salary?

Max Scherzer has the largest-ever MLB contract by yearly salary. Scherzer’s three-year, $130 million deal pays him $43.3 million per season. To put that into perspective, the next highest annual salary in the MLB is $36 million, which is $7.3 million less per year than Scherzer’s!