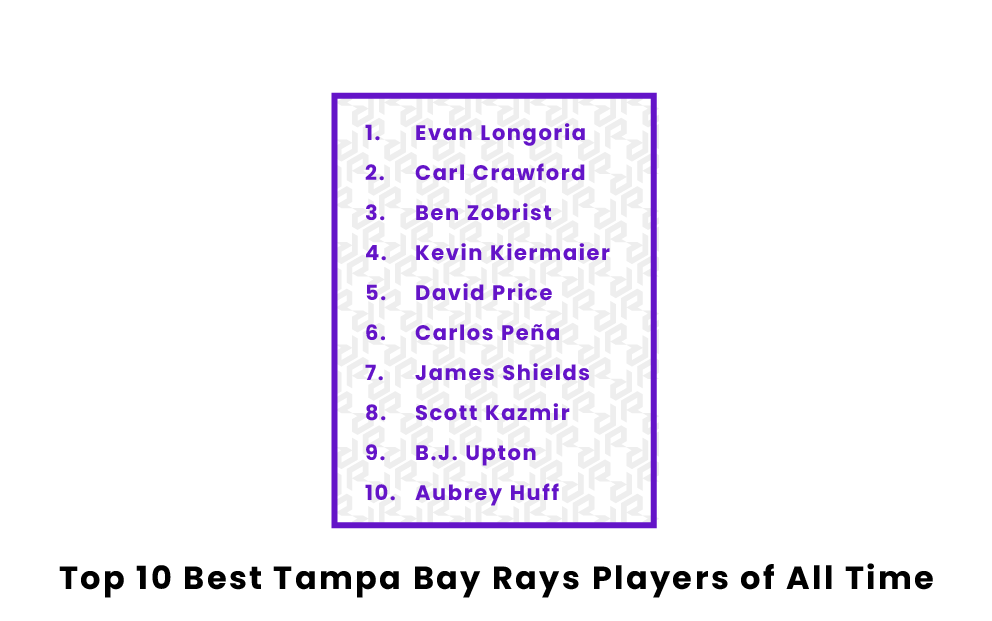 While Rays baseball started in 1998 (originally named the Devil Rays), the franchise has a rich history with tons of talent. The Rays have had two World Series appearances but have yet to win a title. Even without the coveted trophy, Tampa has had many great players in its history. Take note that each of the players on this list is ranked strictly based on their performance with the Rays, and all numbers and accolades were earned while playing for the Rays.

Who are the best Tampa Bay Rays baseball players of all time?

Carl Crawford was called up by the Rays in the middle of the 2002 season and immediately flourished. In four of his first five full seasons with the team, Crawford put up at least 50 stolen bases. In 2004, Crawford went to his first All-Star game and finished the season with 19 triples and 59 stolen bases. The outfielder went on to appear in three more All-Star Games, as well as hitting .345 in the 2008 postseason, before signing with the Boston Red Sox before the 2011 season. Once Crawford left Tampa for Boston, he was not the same player as he suffered a wrist injury and was traded to the Dodgers before the 2013 season. Crawford went on to retire after the 2016 season, a year where he only played 30 games. Crawford finished his career Tampa’s franchise leader in numerous hitting categories, which includes batting average, RBIs, runs, hits, and stolen bases.

Evan Longoria’s rookie season was the year the Rays made a miraculous run to the World Series, where they lost to the Phillies in 2008. Longoria flourished that season, putting up 27 home runs, was named an All-Star, and won the Rookie of the Year award. The 2008 season was not an anomaly, though. Longoria went on to be an All-Star in each of the next two seasons, was named a Silver Slugger in 2009, and won a Gold Glove in 2009 and 2010. The third baseman also hit a career-high 36 home runs in 2016. Plus, in two of his first four seasons with the Rays, Longoria hit 30 or more home runs. Following the 2017 season, the Rays traded Longoria to the San Francisco Giants for four players (Christian Arroyo, Denard Span, Matt Krook, and Stephen Woods).

James Shields won 10 or more games in every season he played for the Rays, except for his rookie year. In 2008, Shields won 14 games and recorded 160 strikeouts with a 3.56 ERA (Earned Run Average) to help the Rays make the postseason. In the 2008 postseason run, Shields was the winning pitcher in the only game Tampa won in the World Series. However, the breakout season for Shields was 2011. The starting pitcher, after a 2010 season where he led the league in total hits given up and earned runs, turned things around with a 16-12 record. In 2011, Shields made the All-Star team and finished third in the Cy Young Award voting. Shields also recorded 11 complete games and four shutout outings, both stats leading all of Major League Baseball. Following the 2012 season, the Rays traded Shields to the Kansas City Royals for a group of players highlighted by outfielder Wil Myers.

David Price was considered one of the best pitchers in baseball in his time with the Rays. Price represented the Rays in four All-Star Games and was constantly in the Cy Young Award conversation. In 2010, the first year Price was named an All-Star, the starting pitcher had 19 wins and posted a 2.72 ERA. Those numbers were good enough to be second in the Cy Young Award voting (Felix Hernandez won the Cy Young Award that season). Two seasons later, in 2012, Price had a career-high 20 wins, 205 strikeouts, and a 2.56 ERA. Price won the Cy Young Award and finished in 12th place in MVP voting. Price continued to dominate, but the team was ready to move in a different direction. After striking out 189 batters in 2014 for the Rays midway through the season, Tampa traded Price to the Tigers as a part of a three-team deal.

Scott Kazmir was a two-time All-Star with the Rays and finished ninth in Rookie of the Year voting in 2005. Kazmir led the league in walks given up with 100 in that rookie season, but the next year dialed it back by just giving up 52. In 2006, Kazmir had a near career-high 3.24 ERA (career-high was in 2015 with the Oakland Athletics and Houston Astros with a 3.10 ERA) and was named to his first All-Star Game. Two years later, Kazmir went 12-8 and made his second All-Star Game appearance. The starting pitcher was the ace of the Rays’ starting rotation for four of his six years in Tampa, excluding his first season in MLB and his final year with the Rays. In that final season with Tampa in 2009, Kazmir posted a 5.92 ERA before being traded in the middle of the season to the Los Angeles Angels. His ERA dipped to 1.73 in 2009 out west.

In 2007, the Tampa Bay Rays signed Pena to a minor league contract where he battled a veteran in Greg Norton for the first base job. Pena lost the battle, but after an early injury to Norton, Pena was called up from the minor leagues to play in the majors. After another injury to third baseman Akinori Iwamura, the path was paved for Pena to be the everyday first baseman. Pena flourished in 2007, and in 148 games, he smacked a career-high 46 home runs and 121 RBIs with a .282 batting average. Pena was ninth in MVP voting that year and won a Silver Slugger Award. Pena went on to start the next three seasons for the Rays at first base and hit 30 or more home runs in two of those years. In 2011, Pena played for the Cubs but then came back to Tampa in 2012, where he hit 19 home runs.

B.J. Upton was a key piece for the Rays while he was in Tampa. In 2007, the first season Upton played over 100 games, the outfielder smashed 24 home runs and had a career-high .300 batting average. Following that season, Upton stole 40 or more stolen bases in three consecutive seasons. In fact, Upton put up 30 or more stolen bases in five consecutive seasons. In 2008, Upton stole a career-high 44 bases and hit seven home runs in the postseason. Upton also stole six bases in the 2008 playoffs. In three of Upton’s eight seasons with the Rays, he hit 20 or more home runs. Upton never won any awards or made any All-Star Games, and following the 2012 season, where he hit a career-high 28 home runs and had 31 stolen bases, he signed with the Atlanta Braves in free agency. Upton finished his Rays career with 232 stolen bases.

Fred McGriff was on the original Tampa Bay Rays, which were then known as the Devil Rays, in 1998. After being a member of the Atlanta Braves for five seasons, Tampa picked McGriff up in the expansion draft. At 34 years old, the first baseman thrived in Tampa. In his first season with the team, McGriff hit .284 with 19 home runs and 81 RBIs. McGriff was not on the downswing of his career the next season in 1999. The first baseman matched a career-high .310 batting average with 32 home runs and 104 RBIs. In 2000, McGriff made his fifth All-Star Game appearance and his first with the Rays. The next year, in 2001, the Rays traded the then-37-year-old first baseman after hitting .318 up to the point of the deal to the Chicago Cubs. The Tampa Bay Rays were the fourth team that McGriff suited up for.

Ben Zobrist started his Major League Baseball career with the Rays in 2006 but was not a big contributor early on. In the first three seasons of his Rays tenure, Zobrist only played a combined 145 games. The 2009 season was where Zobrist truly broke out. The utility man had a batting average of .297 while hitting a career-high 27 home runs and 91 RBIs. Those numbers were good enough to represent Tampa in the All-Star Game and finish the year eighth in MVP voting. Zobrist went on to be a key contributor for the Rays for the next five seasons, including another All-Star Game appearance in 2013. Following the 2014 season, the Rays traded Zobrist to the Oakland Athletics in a multi-player trade. After a few more moves from Zobrist in the next couple of years, the utility man won a World Series with the Chicago Cubs in 2016.

Aubrey Huff started his 17-year career in Tampa and was a big power bat in the lineup. Huff never made an All-Star Game representing the Rays, nor did he win a Silver Slugger, but the first baseman put up incredible numbers. In 2000 and 2001, Huff combined for just 12 home runs in 150 games. The 2002 season, though, was a breakout for Huff, where the power hitter put up a .313 batting average with 23 home runs and 59 RBIs. Huff carried that momentum into 2003, where he hit .311 with a career-high 34 home runs and 107 RBIs. Huff never made the postseason with Tampa and was not a part of the 2008 team. In the middle of the 2006 season, the Rays traded Huff to the Houston Astros for two minor league players. Huff finished his Rays career with a .287 batting average, 128 home runs, and 449 RBIs.

Include a bulleted list of at least 20 other players that didn’t make the top 10 list above, put in alphabetical order.

Who is the best Tampa Bay Rays player of all time?

The best Tampa Bay Rays player of all time is Carl Crawford. The face of the franchise in the 2000s, Crawford led the Rays on a miraculous playoff run in 2008 that ended up in a World Series loss to the Philadelphia Phillies. The outfielder is first in franchise history in batting average, RBIs, runs, hits, and stolen bases. Crawford was also a four-time All-Star with the Rays and put up over 1,000 hits in his time with Tampa.

Which Tampa Bay Rays player holds the record for most home runs?

Evan Longoria holds the record for the most home runs in Tampa Bay Rays history. The third baseman hit 261 home runs in a Rays uniform, which is nearly 100 more long balls than Carlos Pena, who is second with 163. Longoria did a lot of his work in 2009, 2011, and 2016 where he hit over 30 home runs in each of those three seasons. His career-high came in 2016 when he belted 36 home runs.