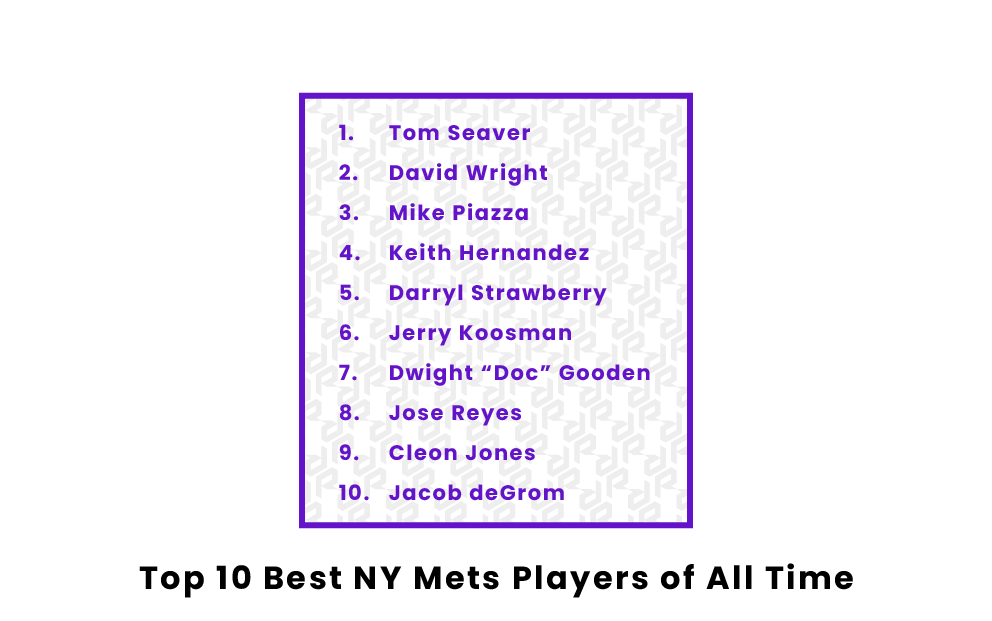 The New York Mets are a baseball franchise founded in 1962. They have won two World Series titles in their 60 seasons, the first in 1969 and the second in 1986. During those 60 seasons, the Mets have had some incredibly talented players. Their top ten players of all time are ranked from one to ten below. Any statistics that are mentioned encompass only each player's time as a Met, not their whole career.

Who are the best New York Mets baseball players of all time?

While there is certainly some debate about who to include on this list, there should be little debate about who the best Met of all time is. Tom Seaver, nicknamed “Tom Terrific,” was the franchise’s first great player, and helped to lead them to their first World Series title in 1969 and a World Series appearance in 1973. Seaver was a pitcher who played with the Mets from 1967-1977 and then came back to play one final season with them in 1983. In that time, Seaver finished with 2,541 strikeouts, 198 wins, and had a career 2.57 ERA. Those are the most strikeouts and wins of any Met ever, and his ERA is the second-lowest of any qualified pitcher in Mets history. Seaver also had the most pitching WAR (76), most innings pitched (3,045 and 2/3), most complete games (171), and most complete game shutouts (44). As for awards, Seaver won the National League Rookie of the Year award in 1967, made ten All-Star teams, and won three Cy Young awards. As for his World Series appearances, Seaver started four games, winning one and striking out 27 batters in 30 innings.

The number two ranked player on this list, David Wright, ranks near the top in Mets history in almost every major statistical category. Wright was a third baseman who played his entire career for the Mets, from 2004 to 2018, and was captain of the team from 2013 until his retirement following the 2018 season. Wright also helped to lead the Mets to their fifth World Series appearance in 2015. If it were not for some devastating injuries, Wright would have a case as one of the best third basemen in MLB history. Nonetheless, Wright ranks first all-time for the Mets in RBIs (930), hits (1,777), runs scored (949), WAR for offensive players (49.2), doubles (390), walks (762), and a few other categories. He also ranks second with 242 career home runs behind Darryl Strawberry. As for awards, Wright made seven All-Star teams, won two Gold Glove awards, and won two Silver Slugger awards. In the 2015 World Series, Wright had five hits, one home run, and four RBIs in five games played.

Undoubtedly the most talented catcher in Mets history, Mike Piazza comes in at number three on the list. Piazza was traded to the Mets from the Florida Marlins in 1998 and immediately began to make an impact on the franchise. Piazza played for the Mets from 1998 to 2005 and helped them make their fourth World Series appearance in 2000, where they lost to the cross-town rival Yankees. As a Met, Piazza made six All-Star Games and won four Silver Slugger awards. He finished his Mets career with 655 RBIs (fourth-most), 220 career home runs (third-most), a .296 career batting average (tied with David Wright for fourth-highest), a WAR of 24.6 (seventh-highest for position players), and a .542 slugging percentage (tied with Pete Alonso for highest). In the aforementioned 2000 World Series, Piazza had six hits, two home runs, and four RBIs in five games played.

The fourth highest player on the list, Keith Hernadez, was undoubtedly the leader of the Mets 1986 World Series championship team. A first baseman, Keith was traded to the Mets in 1983 from the St. Louis Cardinals and played for the Mets from 1983 to 1989. While he was not too crazy about joining the Mets initially, feeling like the Mets were not a great team when he first joined them, he eventually warmed up to the team and had a great Met career. He had a .297 batting average (third-highest), 26.6 WAR (sixth-highest), .387 on-base percentage (fourth-highest), and 468 RBIs (tenth-most). He also played in three All-Star Games, won five Gold Glove Awards, and won a Silver Slugger award in 1984. In the 1986 World Series, Keith had six hits, drew five walks, and drove in four runs in the seven-game series, including the first two Met runs in the deciding seventh game of the series.

While Keith was the leader of the Mets 1986 World Series championship team, the number five ranked player on this list was arguably its most talented. Darryl Strawberry was an outfielder who was on the Mets from 1983 to 1990. Strawberry showed off his talents from the moment he came to the major leagues, winning the 1983 National League Rookie of the Year award. He would go on to make seven All-Star teams and win two Silver Slugger awards during his Mets tenure. As for his statistics, Strawberry is the Mets’ all-time leader in home runs with 252. He also had the second-highest WAR for position players (36.6), second-most RBIs (733), second-most walks (580), third-most runs scored (662), third-most extra-base hits (469), and fifth-most steals (191). In their World Series victory in 1986, Strawberry had five hits, one home run, and four walks.

The second pitcher on the list, Jerry Koosman, is the number six ranked player on this list. A Met from 1967-1978, Koosman was the Mets’ number two pitcher behind Tom Seaver during the World Series runs in 1969 and 1973. Although he often was in Seaver’s shadow, Koosman still had an outstanding career. As a Met, Koosman made two All-Star games and was the runner-up to Randy Jones for the 1976 Cy Young award. Koosman’s 140 wins rank third-most in franchise history, as do his 1,799 strikeouts. He also had 108 complete games and 25 complete game shutouts, which are both second behind Seaver. Other notable Koosman stats include his 3.09 ERA (sixth-lowest), 2,544 and 2/3 innings pitched (second-most), and 346 games started (second-most). In the two Mets World Series that he played in, Koosman started four games, recorded three wins, and had seventeen strikeouts in 26 and 1/3 innings.

Another pitcher, Dwight Gooden, nicknamed “Doc,” comes in at number seven on the list. Doc, who was a Met from 1984 to 1994, was the ace of the 1986 Mets World Series team and was a key part of the championship run. A year after Strawberry did the same, Gooden won the National League Rookie of the Year award after his first season in 1984. The following season, he would go on to have his best season as a Met, winning the Cy Young award and finishing fourth in the MVP voting. Overall, Doc would make four All-Star teams and win a Silver Slugger for his offensive abilities in addition to his pitching. In addition to his awards, Doc finished with the second-most strikeouts of any Met (1,875), second-most wins (157), second-highest pitching WAR (41.6), third-most complete games (67), the highest winning percentage (0.649), and the third-most innings pitched (2,169 and 2/3). In the 1986 World series, Doc started two games and had nine strikeouts in nine innings pitched.

A teammate of David Wright for many years, Jose Reyes is number eight on this list. Reyes was a shortstop who played with the Mets from 2003 to 2011 and then came back to finish his career with the Mets from 2016 to 2018. The only player on this list who did not play in a World Series with the Mets, Reyes did help the Mets win the National League East title in 2006. He made four All-Star teams, won a Silver Slugger award in 2006, and won the National League Batting Title in 2011 for having the highest batting average in the league. When it comes to his statistics, Reyes is the Mets’ all-time leader in triples (113) and stolen bases (408). He also had the second-most hits, with 1,534, the second-most runs scored, with 885, fifth-highest position player WAR, with 28.2, and second-most total bases with 5,437.

The third member of the 1969 World Series championship team featured here, Cleon Jones, comes in at number nine on this list. Cleon was an outfielder who played for the Mets from 1963 to 1975 and was known for his speed and clutch hitting abilities. In his Met career, Cleon had 1,188 hits (fourth-most), 33 triples (fourth-most), 521 RBIs, (eighth-most), 563 runs scored (seventh-most), 1,715 total bases (eight-most), and 192 doubles (tenth-most). He also finished just outside the top ten with his .281 career batting average. While he did not win quite as many awards as some of the other members on this list, Jones was recognized for his talents by being voted onto the All-Star team during the Mets championship season in 1969. During the two World Series that he played in with the Mets, Jones had eleven hits, one home run, and drew five walks.

Jacob deGrom is the final member of this list and the only active player. DeGrom has played his entire career with the Mets since making his debut in 2014. He won the National League Rookie of the Year award following that 2014 season and the accolades have only followed from there. Jacob has already made four All-Star teams and won back-to-back Cy Young awards in 2018 and 2019. As for his statistics, he currently has the lowest ERA of any qualified Mets pitcher with a 2.50 ERA. He also ranks third in pitching WAR (39.7), fourth in strikeouts (1,505), eighth in wins (77), sixth in winning percentage (.592), and eighth in innings pitched (1,261 and 2/3). If he continues at this pace, he will likely move up in all of these categories and this list before his career is over. Lastly, during the 2015 World Series, deGrom started one game, pitching five innings and striking out two.

While the 15 players listed below did not quite crack the top 10, they still deserve some recognition as honorable mentions. They are listed in alphabetical order by last name.

Who is the best NY Mets player of all time?

There is little doubt that Tom Seaver is the greatest Mets player of all time. In addition to all of the statistics and awards that were mentioned above, Seaver helped to change the culture of the Mets. Prior to his arrival, the Mets were one of the worst teams in the league, and within two years of his arrival, they were World Series champions.

Which New York Mets player holds the record for most home runs?

The Mets’ all-time leader in home runs is Darryl Strawberry. As was mentioned above, Strawberry hit 252 home runs in his eight seasons as a Met, meaning he averaged about 32 home runs per season. Strawberry’s single-season high for home runs as a Met was 39, which he accomplished in 1988. Overall, in his seventeen-year career, Strawberry hit 335 home runs, so he hit the vast majority of them during his time as a Met.