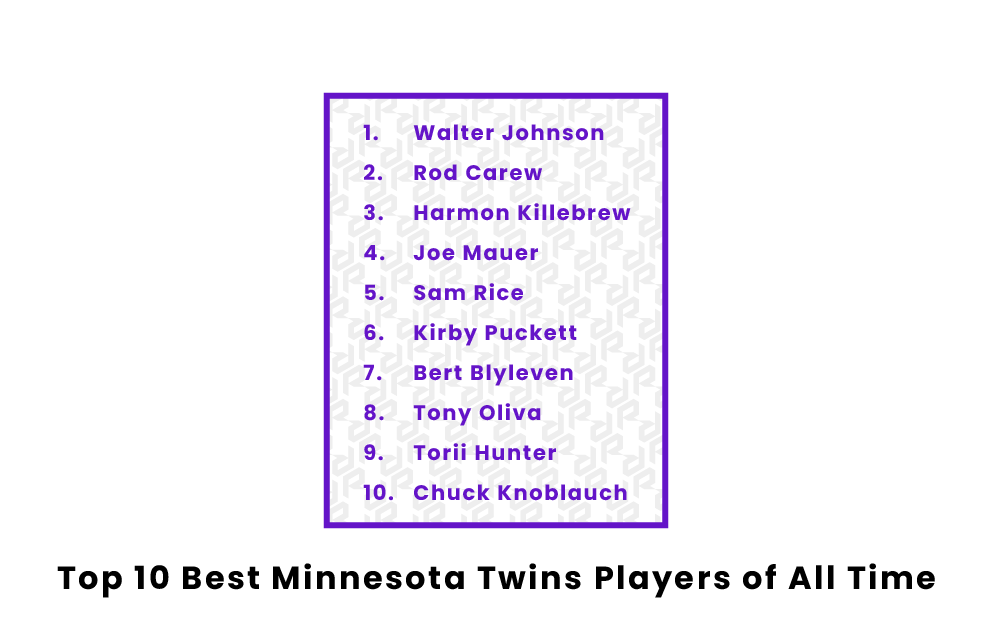 The Minnesota Twins are one of the oldest franchises in Major League Baseball, having been founded as the Washington Senators in 1901. Since then, the organization has won three World Series rings. In their history, the Twins and Senators have seen players with outstanding talent take the field. Keep reading below to learn more about the ten best Twins of all time.

Who are the best Minnesota Twins baseball players of all time?

Not just the best pitcher in franchise history, Walter Johnson is one of the best pitchers of all time. He was dominant on the mound as a member of the then-Washington Senators, twirling 21 magnificent seasons. He was a two-time MVP, once in 1913 and again in 1924. He played before the time of All-Star Games or Cy Young awards, but there’s no doubt he would have gathered many accolades in both categories. Johnson is Major League Baseball’s all-time leader in complete game shutouts with 110, second all-time in wins with 417, and third in innings pitched at 5,914.3. He won the pitching Triple Crown three times, leading the league in wins, ERA, and strikeouts in 1913, 1918, and 1924. He leads the Twins franchise in almost every pitching statistic imaginable and is unquestionably the great player in the organization’s history.

When ranking the best pure hitters of all time, Rod Carew is often in the conversation as one of the greats. He finished with 3,053 hits and a lifetime .328 batting average, both outstanding marks. Carew played his first twelve seasons in Minnesota and did just about as well as anyone could; he was an All-Star in each of those twelve years and won the batting title seven times. He won the AL MVP in 1977, batting .388 and leading the league in both runs and hits. Carew was the ultimate pro at the plate, featuring a disciplined approach that saw him record more walks than strikeouts in 13 of his 19 years. The second baseman has the highest batting average and on-base percentage in Twins history and the highest WAR of any position player in Minnesota’s history.

When thinking of great power hitters, Harmon Killebrew is a name that often comes to mind. He was one of the most prolific bashers of the long ball in the sixties. He was relatively quiet at the plate for his first five years in the Majors, not getting much playing time. However, he got his shot in his sixth season in 1959 and broke out in a big way. He launched 42 home runs, the most in the league that year, and made his first All-Star team. Participating in the midsummer classic would become a theme for Killebrew, as he went on to appear in twelve more All-Star Games throughout his career. He consistently was one of the most feared hitters in the 1960s, culminating with an American League MVP award in 1969. Killebrew led the Twins franchise in slugging percentage and games played. He also leads the organization in home runs and runs batted in.

While Carew may have been one of the best pure hitters of his time, Joe Mauer claimed that title in the 2000s. His ability to get on base and hit for average was second-to-none in his era, as Mauer displayed an innate focus and discipline at the plate. He led the league in batting average three times, once in 2006 and then in consecutive years from 2008-09. He was also the on-base leader of the Majors in 2009 and 2012, becoming one of the most respected players in the league at that time. He was named to six All-Star teams and won five Silver Slugger Awards, but Mauer also displayed exceptional talent behind the plate. He won three Gold Gloves as a catcher, and in 2009 he put it all together. That year, he was first in MLB in batting average, on-base percentage, and slugging percentage, and he won the American League Most Valuable Player award.

Playing alongside Johnson in the days of the Washington Senators, Sam Rice was the franchise’s first great position player. He was a tremendous hitter, leading the league in hits twice and posting a batting average over .300 15 times in his career. Though Rice played before the days of the All-Star Game, he no doubt was one of the best batters of his era, and he certainly stakes a claim as one of the most accomplished in franchise history. Rice’s 2,889 hits are the most of any Twin or Senator ever, and he also leads the franchise in runs scored, doubles, and triples. Rice was an integral part of the 1924 Senators team that won the World Series and was inducted into the Hall of Fame in 1963.

Though he may not quite have the statistical records of other Twins players, there’s no denying Kirby Puckett was the heart and soul of Minnesota in its most successful era. Puckett’s leadership and style of play inspired his teammates and elevated the Twins to new levels, and in 1987 he led the team to its first World Series since 1924. Four years later, the organization returned to the big stage and won again, largely thanks to Puckett’s performance in the American League Championship Series when he won ALCS MVP. The center fielder was more than just an emotional leader; he had the game to back it up. Puckett was named to ten All-Star teams in his career and won six Gold Gloves in seven seasons from 1986-1992. He was also an outstanding hitter, leading the league in hits four times. Puckett combined his ability to hit for average with exceptional power, launching 207 bombs in his career.

Bert Blyleven, the only other pitcher on this list, was a true ace for the Twins in the seventies. He played his first six and a half seasons in Minnesota and never posted an ERA higher than 3.18, a remarkable measure of his talent and consistency. Blyleven made his first All-Star team in 1973, a year in which he led the Majors in complete game shutouts. He made 40 starts that year, posted a 2.52 ERA, and finished seventh in the Cy Young award voting at the end of the season. After that, Blyleven played 11 seasons without being named an All-Star again, but things changed when he returned to the team he debuted with. After bouncing around a few different teams, Blyleven was traded from Cleveland back to Minnesota during the 1985 season, and he responded by making his second All-Star team. He was truly dominant that year, leading the league in complete games, shutouts, innings pitched, and strikeouts. He finished third in the Cy Young voting and was back in familiar territory. Two years later, Blyleven made 37 starts for the Twins team that went on to win the World Series.

Tony Oliva was one of the few players on this list who spent his entire career in Minnesota, and it did him good. The Cuban right fielder was tremendous in his time as a Twin, gaining the love and adoration of fans from Minneapolis and beyond. He was one of the organization’s finest hitters, finishing ninth in hits (1,917) and at-bats (6,301) for his career. Oliva also hit the fifth-most home runs in franchise history with 220 and had the sixth-most doubles at 329. Oliva played his first full season in 1964, and the next eight years would be an excellent showcase of his talents. He won Rookie of the Year in 1964 and made his first All-Star team, a feat he would repeat in the next seven years. He finished in the top six of MVP voting four times and won a Gold Glove in 1966. He was also a three-time batting average leader of the Majors, finishing as a lifetime .304 hitter.

Torii Hunter was very similar to Kirby Puckett, except his career started just as the other Twins legend’s was ending. Hunter was pegged as the center fielder of the future, and he sure lived up to that promise. From 2001-2009, Hunter won nine-straight Gold Gloves in center field, the fourth-most at the position in Major League history. His big smile and electric attitude were infectious on the field, as Hunter played with athleticism and enthusiasm, making him fun to watch and easy to root for. In addition to being a generational defender in the outfield, Hunter could also more than handle his own at the plate. He hit 221 home runs in the same span that he won his Gold Gloves, and he was named a Silver Slugger twice. Though he only played nine full seasons in a Twins uniform, Hunter will be remembered by Minnesota fans forever as a terrific outfielder who could truly do it all.

Covering the second base position in a Minnesota Twins uniform is no small task, not when the player has to follow in the footsteps of Rod Carew. Still, Chuck Knoblauch stepped into the role wonderfully and provided Twins fans with seven years of outstanding baseball. He debuted with a bang in 1991, winning Rookie of the Year and starting for the Minnesota team that would go on to win the World Series. Over the next six seasons, Knoblauch became one of the game’s best middle infielders. He was named an All-Star in 1992 and 1994 before repeating appearances in the All-Star Game in 1996 and 1997. During that time, Knoblauch was also awarded two Silver Sluggers for his position, posting a .304 average during his time as a Twin. He ranks fourth in franchise history in on-base percentage at .391 and is also fourth in stolen bases, with 276.

Who is the best Minnesota Twins player of all time?

The best Minnesota Twins player of all time is Walter Johnson. Johnson, who pitched for the franchise back when they were the Washington Senators, is one of the greatest pitchers of all time. His 164.9 WAR is second in Major League history among all players, and he was a two-time MVP of the league. He led the organization in every possible pitching statistic and was an absolute beast on the mound.

Which Minnesota Twin holds the record for most home runs?

The Minnesota Twins player with the most home runs in franchise history is Harmon Killebrew with 573. Though the first baseman never hit for a ton of average, his ability to mash homers more than made up for any shortcomings. He is not just the franchise leader in home runs but also in slugging percentage, runs batted in, and games played. He made 13 All-Star teams during his career and was the 1969 AL MVP.