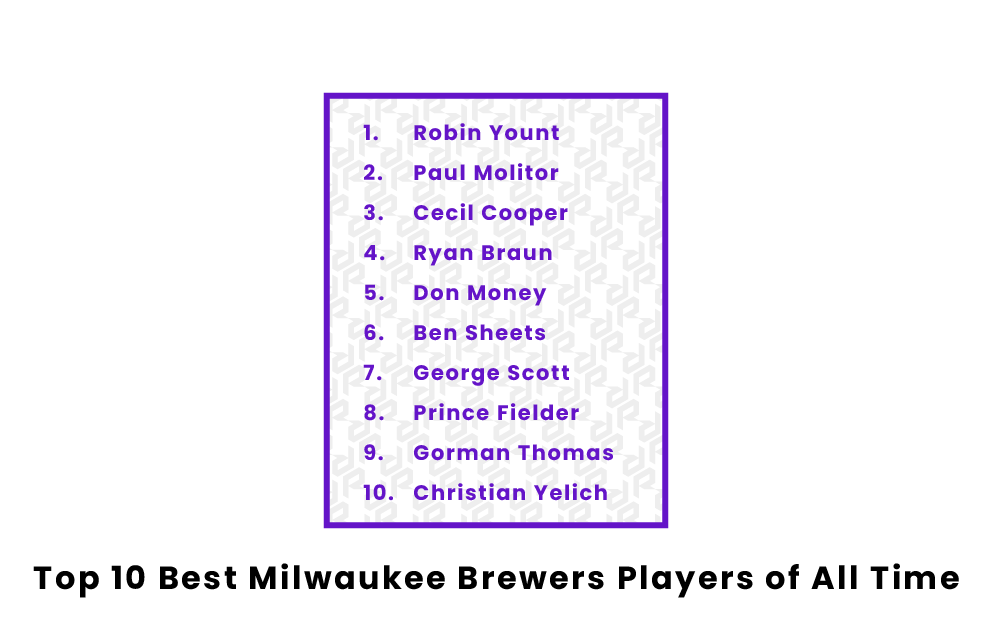 Moving to Milwaukee from Seattle in 1970, the Brewers have one of the most loyal fanbases in Midwestern sports. Though they have not found much playoff success until recently, the Brew Crew have seen a number of talented players move through the organization. To learn more about the ten best players in Milwaukee’s history, keep reading below.

Who are the best Milwaukee Brewers baseball players of all time?

There’s no debate: when baseball fans think of the great Milwaukee Brewers, Robin Yount is always atop that list. The 20-year veteran spent his entire career in Milwaukee and, throughout his time in Wisconsin, established himself as the greatest baseball player Brewers fans had or would ever see. In 1999, he was inducted into the National Baseball Hall of Fame with a Brewers hat on his head. Yount was truly special, as he remains the only player in Major League history to win an MVP at two different positions in the field. He started his career as a shortstop, and in 1982, won his first MVP after hitting .333, but he wasn’t done there. The Illinois native switched to playing centerfield for the Brew Crew in 1985, and in 1989 he won his second Most Valuable Player award. Yount was also a three-time All-Star and Silver Slugger during his career, and in 1982 he won a Gold Glove at shortstop.

While Yount is definitely the best Brewer to ever touch the field, that doesn’t take away from the tremendous impact Paul Molitor had on the franchise. Milwaukee’s second-best player ever by WAR, Molitor’s name can be seen all over the offensive leaderboards for the franchise. He is second in career batting average, fifth in on-base percentage, second in at-bats and runs scored, and second in hits. Molitor also possessed great speed, finishing second all-time in triples among Brewers and first in stolen bases. The infielder was a seven-time All-Star, five times with Milwaukee, and also won two of his four Silver Slugger Awards with the Brewers. The Saint Paul native was also second in franchise history in games played and walks, and he finished fourth in runs batted in with 790.

One of the most complete players in Brewers history, Cecil Cooper could truly do it all. Though he was often overshadowed by Yount and Molitor, Cooper was an integral part of the Brewers’ success in the early 1980s. He was traded to Milwaukee from Boston in 1977, and by 1979, he was an All-Star. Cooper was selected to another All-Star team in 1980 before going on to make three more appearances in the All-Star Game throughout his career. He was an excellent defender, winning back-to-back Gold Gloves at first base in 1979 and 1980. Don’t be mistaken, though; Cooper could also flat-out hit. He won three consecutive Silver Slugger Awards during his time with the Brewers, from 1980-1982. In 1983, he put together a tremendous season, and finished fifth in the MVP voting after driving in 126 runs.

Ranking Ryan Braun among all-time Brewers greats is not easy. On the one hand, he had an outstanding career, playing 14 years in Milwaukee and helping the team win a lot of games. On the other hand, he was caught using steroids at the height of his career. Nonetheless, Braun’s 2011 season was the first since 1982 that saw a Brewer win the MVP Award, and that was just one of many accolades he captured during his tenure in Wisconsin. Braun was also a six-time All-Star, making it for five straight seasons from 2008-2012, and he won five consecutive Silver Slugger Awards during that same span. He helped Milwaukee get back to the postseason after a 25-year drought, and was the face of the franchise for over a decade.

Playing his first five years in Philadelphia, Don Money was never much of a noticeable ballplayer on the field. However, he was traded to the Brewers in 1973, and that all began to change. The following season, Money made his first All-Star Team, a sign of things to come. He dealt with injuries in 1975, but from 1976-1978, he was named an All-Star three straight times. As the decade turned over, Money transitioned into a part-time playing role, but in 1982, the Brewers’ most successful season of the era, he hit .284 in 96 games to help Milwaukee make the playoffs. Money is seventh all-time in franchise history in hits, with 1,168, and is also eighth in games played, cementing him as one of the Brew Crew’s finest players ever.

The only pitcher to appear on this list, Ben Sheets was actually even better than his stats may have suggested. Pitching during the height of the Steroid Era, Sheets routinely had to face out-of-this-world power hitters such as Barry Bonds, Manny Ramirez, and Gary Sheffield. Still, he managed to put together a number of great seasons, including posting a 2.70 ERA and 264 strikeouts in 2004. He was selected to the All-Star Game that season, one of four times he was awarded the honor. Sheets is undoubtedly one of the best pitchers in the Brewers’ history, as he owns the second-highest career WAR of any Milwaukee pitcher and is also second in the franchise in strikeouts with 1,206. Sheets also finished fifth in career innings pitched for the Brewers and sixth in wins, highlighting his major contributions on the mound as a member of the Brew Crew.

When it comes to Milwaukee’s history, there is no better defender than George Scott. Scott was an absolute wizard in the field, bringing an immediate boost on defense to the Brewers upon being traded there from the Red Sox in 1972. He was already a three-time Gold Glove winner in Boston, but in his five seasons in Milwaukee, he racked up a whopping five Gold Gloves at first base, winning the award every season he played in Wisconsin and setting the franchise record for Gold Glove Awards. Don’t focus too much on Scott’s defensive prowess, though; he could also hit. In his five years as a Brewer, Scott had a batting average of .283, and in 1975, he led the league in home runs and runs batted in. He was on the MVP ballot every single year he played in a Brewers uniform, and he was an All-Star in 1975 with Milwaukee (as well as a two-time All-Star in Boston).

Many Milwaukee fans get sad when thinking about Prince Fielder, but for all the right reasons. The burly first baseman was a fan favorite on the Brewers, and also the son of former Brewers great Cecil Cooper, but he was traded away to the Detroit Tigers at the height of his career in 2012. Still, Fielder and his trademark smile left a lasting legacy on the Brewers franchise, and his bat left a lot of baseballs over the wall. Fielder made three All-Star teams in his seven seasons as a Brewer, and he was also a two-time Silver Slugger award winner. He led the league in home runs with 50 in 2007, becoming the youngest National League player ever to hit 50 homers. Two years later, he clobbered 46 long balls and led the league in runs batted in with 141, also finishing fourth in the MVP voting. Fielder is the Brewers’ all-time leader in on-base percentage and slugging percentage, and he also holds the franchise record for intentional walks with 115.

Long before Prince Fielder and his big bat made their way to Milwaukee, there was Gorman Thomas and his big mustache. Thomas’ first four years with the Brewers were uneventful, but he broke out in a big way in 1978, after taking a year-long absence from Major League Baseball. The center fielder hit 32 home runs, kickstarting an amazing stretch of power for Thomas that would coincide with the Brewers’ rise to the playoffs. He hit 20 or more home runs in each of the next five seasons, mashing a total of 197 home runs over the six-year stretch. He made his lone All-Star Game in 1981 and also led the league in homers in 1979 and 1982. He is fifth all-time in franchise history in home runs with 208 and will be remembered for being one of the Brewers’ great power hitters.

Though he’s last on this list for now, there’s a good chance Christian Yelich will finish much higher up in the Brewer hierarchy when all is said and done. The outfielder played his first five seasons with the Miami Marlins, but after being traded to Milwaukee in 2018, a switch was flipped. Yelich was named to his first All-Star Team, and he put together one of the most dominant second halves baseball has seen recently, finishing the year with 36 homers, 110 RBI, and his first-ever MVP award. He didn’t stop there, though; the next year, Yelich came out even hotter than the end of his 2018 campaign, launching home runs at a jaw-dropping rate. He was seemingly on pace to win back-to-back MVPs, but injuries late in the season cost him nearly 30 games, and he finished in second place in the voting. Still, Yelich’s run from 2018-2019 is one of the best in Major League history following the Steroid Era, and in addition to the MVP, he was also named to two All-Star Teams and won two Silver Sluggers in that period.

Who is the best Milwaukee Brewers player of all time?

The best Milwaukee Brewers player of all time is Robin Yount. Yount accomplished something no other MLB player has ever done: he won two MVPs at two different positions. Starting as a world-class shortstop and transitioning to centerfield later in his career, Yount was the ultimate Brewer during his 20-year career. He made three All-Star Teams and is also the franchise leader in career WAR (77.4).

Which Milwaukee Brewers player holds the record for most home runs?

The Milwaukee Brewers player with the most franchise home runs is Ryan Braun, with 352. Braun was one of the league’s best hitters during his prime, though he was caught using steroids at the peak of his career. The left fielder smashed 25 or more home runs in each of his first six seasons, leading the league with 41 in 2012.