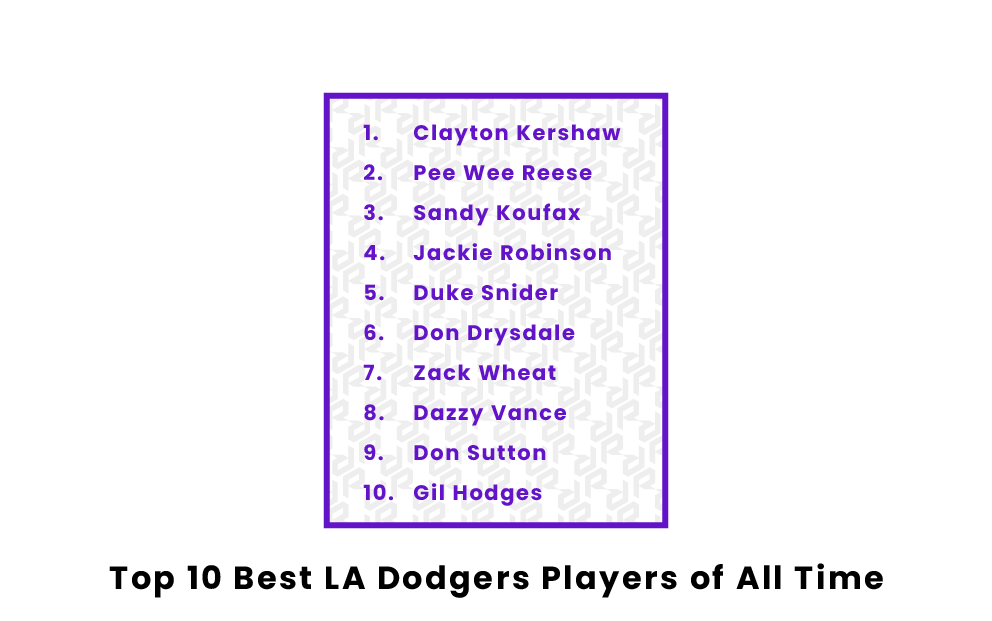 One of the most storied franchises in all of Major League Baseball, the Dodgers have played on the East Coast and the West Coast. In both Brooklyn and Los Angeles, the organization has had incredibly-talented players, and some great enough to go down in baseball history. To learn more about the top 10 L.A. Dodgers of all time, keep reading below.

Who are the best LA Dodgers baseball players of all time?

Clayton Kershaw is one of the best hurlers to ever step foot on a Major League mound. He has been the best pitcher in the league for over a decade, and it’s no question that he’s the best Dodger ever. In 2011, at the age of 23, Kershaw won the pitching Triple Crown, leading the league in wins, ERA, and strikeouts. He was rewarded with his first Cy Young honors and he made his first All Star team that year, but it would be far from his last.

Over the next six seasons, from 2012-2017, Kershaw was far and away the most dominant pitcher in the league. He was an All Star in every season during that span, and in 2013 he won his second Cy Young award after posting a league-leading 1.83 ERA. The following year, Kershaw was somehow even better, recording a league-low 1.77 ERA and winning his third Cy Young in addition to the National League MVP. Overall, he is a nine-time All Star and five-time ERA leader in the Majors.

While Kershaw may be the best pitcher ever for the Dodgers, on the other side of the plate Pee Wee Reese was the best hitter ever for the ball club. Reese debuted in 1940, and by his third season he was already an All Star at shortstop. However, he missed the next three years due to military service. When he returned in 1946, Reese was one of the league’s best.

He was an All Star in each of the next nine seasons and, during that span, finished in the top 10 of the MVP voting six times. He ended up playing 16 years for the Dodgers and recorded some outstanding marks, as is currently third in games played, second in at bats and hits, and first in runs scored. Reese also has the fourth-most doubles of any Dodger ever, and he is the franchise’s all-time leader in walks. In 1955, he helped Brooklyn win the World Series, and he was inducted into the Hall of Fame thirty years later in 1984.

When many fans think of the Dodgers franchise, they immediately think of Sandy Koufax. The lefty from Brooklyn began playing for his hometown team in 1955, but his career did not get off to a fast start. Over his first six years, Koufax posted a 4.10 ERA and never won more than 11 games. However, his fortunes began to change in 1961. That season, Koufax made his first All Star team and led the league in strikeouts. From there, it was only uphill. He was an All Star again in 1962, and he finished as the league’s ERA leader.

In 1963, Koufax won the pitching Triple Crown and was awarded his first Cy Young. That wouldn’t be the last time he was so dominant, as he repeated both his Triple Crown and Cy Young efforts in 1965 and 1966. Unfortunately, Koufax was forced to retire at the age of 30 following his third Cy Young due to chronic arthritis in his pitching arm. Still, his six-year stretch from 1961-1966 is seen as perhaps the greatest pitching career the modern game has ever witnessed.

To many people, Jackie Robinson is known as a pioneer. In 1947, he became the first African American player in the history of the Major Leagues, breaking a color barrier that had stood since the league’s inception. However, Robinson was more than just the first to do something: he was also a tremendous ballplayer. The same year that he broke into the Majors, he won the Rookie of the Year award, but that would be just a small part of his legendary career.

Two years later, Robinson led the league in batting average and stolen bases and won the National League MVP award. From 1949-1954, Robinson was a six-time All Star and one of the league’s most dynamic baserunners. Though he only played 10 years in Brooklyn, Robinson still left his mark on the franchise. He has the fourth-highest on-base percentage in franchise history and has also scored the seventh-most runs of any Dodger ever.

When it comes to power hitters of the 1950s, there were few finer than Duke Snider. Born and raised in Los Angeles, Snider is the best slugger the Dodgers franchise has ever seen. He made his first All Star team in 1950, and he would go on to repeat the honor in each of the next six seasons. During that time, Snider had a knack for leading the league in offensive categories. He was a three-time runs leader, a two-time slugging percentage leader, and led the Majors in hits and home runs once in separate seasons.

Overall, Snider had just one season in the fifties in which he dipped below 20 home runs, and that came in an injury-shortened season in 1958. He is the Dodgers’ all-time home run leader with 389, and he is also first in runs batted in and extra base hits. He won two rings with the club, including one in his hometown in 1959.

Born just north of Los Angeles, Don Drysdale was destined to be a Dodgers great. He debuted in 1956 as just a 19 year-old, and it was only up from there. In 1959, Drysdale led the league in strikeouts and shutouts, and was named to his first All Star team. He missed getting the honor again in 1960, but for the next few years after that he was spectacular. Drsydale made five-straight All Star appearances from 1961-1965, leading the league in games started four times and in innings pitched twice during that span.

In 1962, he won the pitching Triple Crown and was given the Cy Young award. Overall, he has the second-most wins and innings pitched of any Dodger ever, and he’s third in strikeouts. Drsydale also owns the dubious title of having hit the most batters of any Dodger pitcher ever, but that does little to dilute his great legacy.

While Snider may be the best power hitter to ever play for the Dodgers, there was no one better at putting the bat on the ball than Zack Wheat. Debuting all the way back in 1909, the left fielder would go on to play 18 amazing seasons with the then-Brooklyn Dodgers. He played before the time of the All Star Game, but there’s no doubt Wheat was among the top hitters of the time. He batted over .300 in 13 of his 18 years as a Dodger, and in 1918 he led the league with a .335 batting average.

Overall, Wheat recorded 2,804 hits as a member of the franchise, the most of any Dodger ever. He didn’t just hit for average, however. Wheat also has the most doubles, triples, and total extra base hits in franchise history, and he is also third in runs batted in. He has played the most games of any Dodger and has also scored the second-most runs.

Like Wheat, Dazzy Vance played in the MLB before the induction of the All Star Game. Had the event been around during the righty’s career, he surely would have played in it many times. Vance’s career actually had an interesting trajectory. He didn’t get to the Dodgers until he was 31, after playing for other teams and taking professional breaks from the game. When he did finally step on the mound in Brooklyn, Vance was immediately one of the best starting pitchers in the Majors.

Vance led the league in strikeouts a whopping seven straight times from 1922-1928, a feat that no other Dodger has since equalled. In 1924, Vance had his greatest season ever. He won the pitching Triple Crown and also led the league with 30 complete games en route to winning the National League MVP award. Vance would go on to lead the league in ERA two more times, and he also led the league in shutouts four separate times. Overall, he is fourth in wins and innings pitched amongst the Dodgers franchise.

The story of Don Sutton is one of incredible longevity. When the righthander debuted at the age of 21, nobody knew he’d still be pitching over two decades later. Sutton played 16 years as a Dodger and was in the Majors for 23 years total, the most of any Dodger ever. He racked up some incredible totals, including being seventh in Major League history in strikeouts and innings pitched, as well as third in games started.

In the scope of the Dodgers franchise, his totals are even more legendary. He has the most wins of any Dodger ever, and is also first in innings pitched and shutouts. From 1972-1977, Sutton was at his finest, being named an All Star four times as well as routinely finishing among the top players in innings pitched. In 1980 at the age of 35 he led the league in ERA with a 2.20 mark, and he would go on to pitch 10 more seasons of above-average baseball before retiring.

Gil Hodges’ tenure with the Dodgers franchise came at just the right time. The first baseman appeared in seven different World Series with the team, and he was a big part of them winning in both 1955 and 1959. Hodges possessed tremendous power at the plate, recording 20 or more home runs in 11-straight seasons from 1949-1959.

Overall, he is second in franchise history with 361 home runs and is also second in runs batted in, as well as third in extra base hits. He was an eight-time All Star in Brooklyn, with his first seven appearances coming in consecutive order from 1949-1955. During that span, Hodges knocked in over 100 runs in every season, and he also batted over .280 five times. He was also a terrific defender at first base, winning three straight Gold Gloves from 1957-1959.

Who is the best LA Dodgers player of all time?

The best L.A. Dodgers player of all time is Clayton Kershaw. With three Cy Youngs, a National League MVP, and nine All Star appearances, there’s no question Kershaw is the most dominant player in the history of the franchise. He has led the league in ERA five times and in 2011 won the pitching Triple Crown. He also helped guide the Dodgers to their seventh World Series title in 2020.

Which LA Dodgers player holds the record for most home runs?

The L.A. Dodgers player with the most home runs is Duke Snider, with 389. Snider was one of the best bashers of the baseball in the fifties, topping 40 homers five times in the decade and only dipping below 20 in 1958, when he missed 56 games due to injury. Snider has the highest slugging percentage in Dodgers history and is also first in both runs batted in and extra base hits for the franchise.