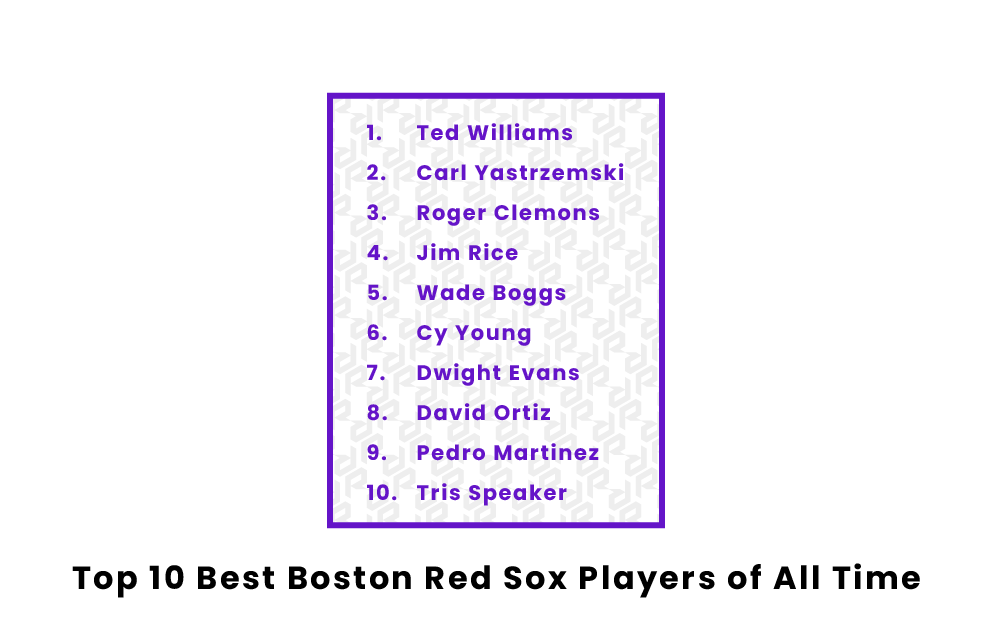 The Boston Red Sox are one of the oldest teams in Major League Baseball, so it should come as no surprise that they have had some incredibly talented players over the years. Since they were founded in 1901, the team has won nine World Series titles, most recently in 2018. Below, the top ten players in franchise history are ranked from one to ten. It should be noted that any statistics and awards mentioned only encompass a player’s time in Boston.

Who are the best Boston Red Sox baseball players of all time?

One of the greatest players in MLB history, there is little doubt that Ted Williams is the best Red Sox player of all time. Nicknamed “The Kid,” Williams was an outfielder who played his entire career with the Red Sox, from 1939-1960. He did miss the 1943-1945 seasons while he was serving for the US military in World War II. During those seasons that he played, Williams made 19 All-Star Teams, led the American League in batting average six times, and won the MVP award in 1946 and 1949. He also won the “Triple Crown” award twice, leading the American League in batting average, home runs, and RBIs. As for his statistics, The Kid is the Red Sox all-time leader in batting average (.344), home runs (521), WAR for position players (122), on-base percentage (.482), walks (2021) and 13 other offensive categories. He is also the most recent hitter in Major League history to have a batting average of over .400 for an entire season, which he accomplished in 1941 by hitting .406. He led Boston to a World Series appearance in 1946, in which he had five hits, one RBI, and five walks in seven games. Unfortunately, the Red Sox lost to the St. Louis Cardinals. After his career, Williams was inducted into the National Baseball Hall of Fame in 1966.

Fittingly, the number two ranked player on this list played his first season for the Red Sox the year after Ted Williams retired. Carl Yastrzemski, or “Yaz” for short, was an outfielder who played for the Red Sox from 1961-1983. In those 23 seasons, Yaz made 18 All-Star Games, won seven Gold Glove Awards, and was the American League MVP in 1967. During that 1967 season, Yaz earned the aforementioned Triple Crown with his .326 batting average, 44 home runs, and 121 RBIs. Carl also won the batting title in 1963 and 1968. As for his statistics, he is the Red Sox all-time leader with 1,816 runs scored, 3,419 hits, 5,538 total bases, 646 doubles, 1,844 RBIs, and a few other categories. While they did not win either time, the Red Sox made two appearances in the World Series during Yaz’s career, in 1967 and 1975. During those appearances, he had 19 hits, three home runs, and nine RBIs in 14 games. A few years after his playing days were over, Yastrzemski was inducted into the National Baseball Hall of Fame in 1989.

The first pitcher in our rankings, Roger Clemons is the number three ranked player on the list. Clemons pitched for the Red Sox from 1984-1996, and during that time, he made five All-Star Teams, won three Cy Young Awards (1986, 1987, 1991), and led the American League in ERA six times. Clemons leads all Red Sox pitchers throughout history in 10 categories, including wins (192), strikeouts (2,590), WAR for pitchers (80.7), and complete game shutouts (38). He was the ace of the Red Sox pitching staff when they made the World Series in 1986; however, they lost to the New York Mets in seven games. Clemons started two games in that series, and while he did record a decision in either game, he had 11 strikeouts in 11 and 1/3 innings. While his career certainly warranted selection to the National Baseball Hall of Fame, Clemons has not been voted in largely due to his alleged association with performance-enhancing drugs.

A teammate of Roger Clemons on the same 1986 World Series team, Jim Rice checks in at number four. An outfielder and designated hitter, Rice played his entire career for the Red Sox from 1974-1989. The 1978 American League MVP, Rice also made eight All-Star Teams and won a Silver Slugger Award in back-to-back seasons in 1983 and 1984. On The Red Sox’s all-time offensive lists, Rice ranks fourth in runs scored (1,249), third in hits (2,452), third in total bases (4,129), fourth in home runs (382), fourth in RBIs (1,451), and sixth in triples (79). While he was unable to play in the 1975 World Series, during the 1986 World Series, Rice had nine hits and drew six walks in the seven games he played, although he did not have a single home run or RBI. In recognition of his greatness, Rice was elected to the National Baseball Hall of Fame in 2009.

The third member of the 1986 team to make the list, Wade Boggs, is the number five ranked player on this list. A member of the Red Sox from 1982-1992, Boggs was a third baseman who made eight All-Star Teams, won six Silver Slugger Awards, and won five American League batting titles during those 11 seasons. Additionally, Boggs ranks third all-time for the Red Sox in position player WAR (71.9), second in batting average (.338), third in on-base percentage (.428), fifth in hits (2,098), and fifth in doubles (422). In the 1986 World Series, Boggs had nine hits, four walks, and three RBIs in seven games played. Boggs would go on to play five seasons for the New York Yankees and two seasons for the Tampa Bay Rays before retiring in 1999. Six years after his career was complete, Boggs was inducted into the National Baseball Hall of Fame in 2005.

The second pitcher on this list and the first to have actually won a World Series with the Red Sox, Cy Young comes in at number six. Young pitched eight seasons for the Red Sox from 1901-1908 and helped lead the Red Sox to victory in the first World Series in 1903. Since he played during the early 1900s, many of the awards that are given out today, such as All-Stars and MVPs, did not exist while Cy Young played. In fact, the highest award a pitcher can receive today is the Cy Young award, obviously named after the man himself. Nonetheless, Cy did win the Pitching Triple Crown in 1901, leading the American League in wins, ERA, and strikeouts. He also led the league in wins the next two seasons in 1902 and 1903. On the Red Sox all-time pitching lists, Young is tied with Roger Clemons for the most wins with 192, ranks second in WAR for pitchers (64.5), second in ERA (2.00), third in innings pitched with 2,7128 and 1/3, and first in complete games with 275. Cy Young was inducted into the National Baseball Hall of Fame as a part of the second class in 1937.

One of the most recognizable Red Sox players of all time, especially for modern fans, David Ortiz is number eight on the list. Ortiz, nicknamed “Big Papi,” was a member of the Red Sox from 2003-2016, and helped Boston break their World Series drought in 2004. Ortiz was also a member of the Red Sox 2007 and 2013 World Series Champion teams. During his 14 seasons, Big Papi made 10 All-Star Games, won seven Silver Slugger Awards, and finished in the top five in MVP voting for four straight years from 2004-2007. Amongst all Boston players, Ortiz ranks sixth with his 2,079 hits, third with his 524 doubles, sixth in position player WAR with 52.7, second in home runs with 483, and fifth in total bases with 4,084. During those three World Series, he had 20 hits, three home runs, and 14 RBIs. Ortiz was inducted into the National Baseball Hall of Fame in 2022.

The third pitcher on this list, Pedro Martinez, is the ninth-ranked player on this list. Pedro played for Boston from 1998-2004. During his final season in Boston, Pedro joined Ortiz in helping the Red Sox snap their aforementioned World Series title drought. During his seven seasons with the team, he made four All-Star Teams and won back-to-back Cy Young Awards in 1999 and 2000. During the 1999 season, he won the Pitching Triple Crown with 23 wins, 2.07 ERA, and 313 strikeouts. On Boston’s all-time pitching lists, Pedro ranks third in pitcher WAR (53.8), third in strikeouts (1,683), sixth in wins (117), and tenth in ERA (2.52). Pedro started one game during the 2004 World Series and got the win, striking out six in seven innings pitched. Pedro retired in 2009 and would go on to make the National Baseball Hall of Fame in 2015.

The second early 20th century player on the list, Tris Speaker, rounds out the list at number ten. Speaker played for the Red Sox from 1907-1915 and helped lead the Red Sox to two World Series titles in 1912 and 1915. Speaker won one of the first American League MVP awards in 1912, and also led the American League in hits and doubles in 1914. He ranks third all-time in batting average for Boston position players at .337, fifth in position player WAR with 55.8, fourth in on-base percentage at .414, second in stolen bases with 267, and second in triples with 106. During the two World Series he played in, Speaker had 14 hits, two RBIs, and eight walks in 13 games played. He would go on to retire in 1928, and once the Hall of Fame came to be in the mid-1930s, Speaker joined Cy Young in the second Hall of Fame class in 1937.

While the 15 players listed below did not quite make the top ten, they still deserve some recognition as honorable mentions. They are listed in alphabetical order by last name.

Who is the best Boston Red Sox player of all time?

While the Red Sox have had some great players over the years, the best Red Sox player of all time is Ted Williams. As was mentioned above, The Kid holds the Red Sox record in 19 categories, including home runs, batting average, and walks. His aforementioned .482 career on-base percentage is the highest of any player in MLB history, regardless of team. Clearly, Ted Williams stands out above the rest of the great Red Sox players.

Which Boston Red Sox player holds the record for most home runs?

The 521 home runs hit by Ted Williams are the most hit by any Red Sox player in history, further cementing his case as the best Red Sox player ever. Williams hit his home runs in 19 seasons played, meaning he averaged about 27 home runs per season. Those 521 home runs are good enough to rank him tied for 20th of all players all-time with Frank Thomas and Willie McCovey. Clearly, Williams is one of the best players in MLB history.