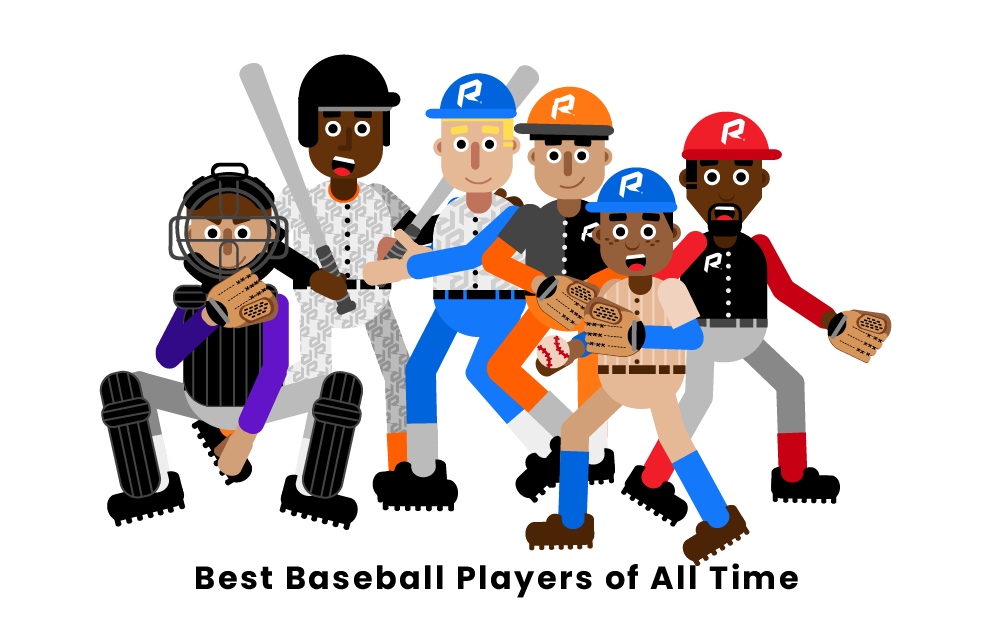 Baseball has been played for more than 150 years in the United States as the first official game occurred in 1846 between the New York Knickerbockers and likely the New York Gotham Club. In the centuries since, baseball has grown into the national pastime of the United States and has a rich history of legendary players. Of all the legendary players, these ten stand above the rest as the best baseball players of all time.

Who are the best baseball players of all time?

Babe Ruth is undoubtedly the best baseball player of all time as he is arguably the best hitter in the history of the sport and was one of the best pitchers during the 1910’s for the Boston Red Sox. Ruth was born in Baltimore in 1895 and made his major league debut as a 19-year-old in 1914. He was originally signed by the Baltimore Orioles in 1914 before the Orioles sold him to the Red Sox. Ruth was used primarily as a pitcher by the Red Sox from 1914 until they traded him to the rival New York Yankees in 1920. Despite Ruth’s success as a pitcher, the Yankees turned Babe into a full-time outfielder, where he became one of the best sluggers in the history of the sport. Babe hit 714 career home runs during a period in baseball history where few hitters were successfully hitting home runs consistently, a period known as the dead ball era. 714 career home runs was a record for the most home runs ever hit by any player for 39 seasons after Ruth retired until Hank Aaron hit his 715th career home run during the 1974 season. Currently, he has the third-most home runs of any player in baseball history behind Aaron and Barry Bonds.

Hank received at least one MVP vote in 18 of his 22 seasons but only won the MVP award once, in 1957, after leading MLB in home runs and runs batted in. Despite this, Hank is still considered one of the best sluggers of all time, and many consider him to be the true leader in home runs in major league history since the one player ahead of him, Barry Bonds, allegedly took performance-enhancing drugs during a portion of his career.

Willie Mays is from Alabama and played one season for the Birmingham Barons of the Negro League as a 16-year old before signing with the New York Giants in 1950 and making his MLB debut in 1951. Mays played for the Giants in 21 of his 23 MLB seasons and was with the team when they moved from New York to San Francisco in 1958. Mays won Rookie of the Year in 1951 with the Giants but then spent nearly two seasons away from the team as he served in the United States Army during the Korean War. He was inducted into the Baseball Hall of Fame in his first year of eligibility in 1979.

As a player, Mays was primarily used as a center fielder with the Giants and had a reputation as one of the best defensive players of his era. Mays’ most famous defensive play occurred during the 1954 World Series when the Giants were hosting the Cleveland Indians at the Polo Grounds. Mays made a spectacular over-the-shoulder catch in a tied game in the eighth inning of game one. The Giants ultimately won that game and the series, and this was the only championship in Mays’ career.

In the early days of baseball, Cy Young was the most dominant player in the sport. His career began in 1890 with the Cleveland Spiders, where he pitched for nine seasons before pitching for the St. Louis Perfectos in 1899. Throughout his 21-year career, Young pitched for the Spiders, Perfectos/Cardinals, Boston Americans, Cleveland Naps, and Boston Rustlers. He has set records that will never be broken in baseball history, such as his innings-pitched record of 7356 during his career.

Young had 16 seasons in which he pitched 300 or more innings which is unheard of in today’s era where pitchers rarely reach the 200-inning mark for a season. Young also faced nearly 30,000 batters during his career and had a career earned run average of 2.63. The current Cy Young Award, which is awarded to the best pitcher in each league every year, is named in his honor. Young also won the first-ever World Series with the Boston Americans in 1903 as a 36-year-old. Despite his relatively old age, Young was still the most dominant pitcher in the American League at this time with the Americans.

Barry Bonds is likely the best player in baseball history who has not earned a spot in the Hall of Fame. Despite his success, which clearly makes him one of the ten best players in the history of the sport, Hall of Fame voters have not voted in Bonds due to scandals claiming that he benefited from performance-enhancing drugs (PEDs) throughout his career. Several other players, such as Roger Clemens, Sammy Sosa, and Mark McGwire, are also not in the Hall of Fame despite clearly having good enough on-field performance for similar reasons as Bonds. Despite this, Bonds holds the all-time record for home runs hit with 762 and hit 73 home runs in a single season in 2001.

Bonds was clearly the most dominant hitter during the late 1990’s and early 2000’s in an era where sluggers such as Mark McGwire, Sammy Sosa, and Rafael Palmeiro were also destroying opposing pitchers. Bonds is from California and the son of another former MLB player, Bobby Bonds, who played for the Giants for most of his career. Barry played for the Pittsburgh Pirates and San Francisco Giants in his career, but the majority of his success came with the Giants.

When baseball fans think about dominant starting pitchers with the last name Johnson, many think of Randy Johnson, who dominated opposing hitters throughout the 1990’s. However, nearly a century before Randy was Walter Johnson, who was even more dominant against opposing hitters than Randy was. Walter Johnson is the first player on this list to have played for the same team during his entire career, as he spent 21 seasons with the Washington Senators and won the World Series with them in 1924 when the Senators defeated the New York Giants in seven games. Similar to Cy Young, Johnson was used as a workhorse to an extent that will never be seen again, as he pitched 531 complete games and nearly 6000 total innings in his career. Johnson also holds a record with 110 complete-game shutouts in his career, which is a record that will undoubtedly never be broken.

Ty Cobb is likely the best contact hitter of all time, as he did not have overwhelming power like many of the other hitters on this list had. Cobb played 22 of his 24 seasons for the Detroit Tigers before ending his career with the Philadelphia Athletics. Despite his overwhelming success on the field, Cobb had a reputation as a villain off the field. Cobb was born in Georgia and was nicknamed “The Georgia Peach." As well as being an elite hitter, Cobb was also an elite base stealer as he stole nearly 900 bases in his career.

Unlike all the other players on this list, Oscar Charleston did not play a single game for a Major League Baseball team and instead spent his entire career in the Negro Leagues. Because of this, Charleston is not as well known in baseball history as the other players, but he was just as dominant. Charleston was from Indiana and played for five different teams over his 18-year career, but saw most of his success with the Pittsburgh Crawfords. The 1932 Crawfords are considered the greatest Negro League team of all time, as they had a record of 99-36 and included Charleston and other future Hall of Famers such as Bob Gibson and Satchel Paige. Many of Charleston’s career achievements and stats are unknown because Negro League stats were not well documented. Still, it is known that Charleston was the best player in a league that had comparable talent to the Major Leagues. Charleston would have been one of the best players in MLB history if the racism of the era did not prohibit him from playing.

Ted Williams played his entire 19-year career for the Boston Red Sox and is considered a legend in Boston sports history. As well as a legendary baseball player, Williams also served in the United States Military for three years during World War II and what would have likely been extremely productive years for him had he stayed on the diamond. Despite the missed time, Williams reached base 4,675 times in his career with nearly 3,000 career hits. He has the highest career on-base percentage of any player all-time at .482 and won the Triple Crown twice. Williams also led MLB in batting average six times during his career but never won a World Series with the Red Sox despite all his success. Additionally, he was the last player in Major League Baseball to record a batting average of over .400, which he did back in 1941.

Similar to Barry Bonds, Roger Clemens has not earned a spot in the hall of fame due to his role in the steroid epidemic of baseball during the 1990’s. Clemens was the most successful pitcher of his era and has won the most Cy Young awards of any pitcher in MLB history with seven. Clemens also spent many seasons with the Boston Red Sox and New York Yankees as he won an MVP with the Red Sox but also won a Cy Young award with the Yankees in 2001. As a matter of fact, Clemens won the Cy Young award with three different teams as he won the award with the Toronto Blue Jays, Boston Red Sox, and New York Yankees. Clemens was born in Ohio but went to high school and college in Texas before being drafted by the Red Sox in the first round of the 1983 draft. Despite not being in the hall of fame, Clemens is clearly one of the best pitchers in the history of baseball and arguably a top-10 player in the history of the sport.

Who is the best baseball player of all time?

Babe Ruth is widely considered to be the best player in baseball history as he is arguably the best hitter of all time and also had a good career as a pitcher. Ruth mostly pitched for the Boston Red Sox and was moved to a full-time outfielder with the New York Yankees, where he was the best slugger of his era and teammates with another all-time great, Lou Gehrig. Some may argue that Hank Aaron, Barry Bonds, or Cy Young could be considered the greatest player of all time.

Who has hit the most home runs in baseball?

Pages Related to Top 10 Best Baseball Players of All Time