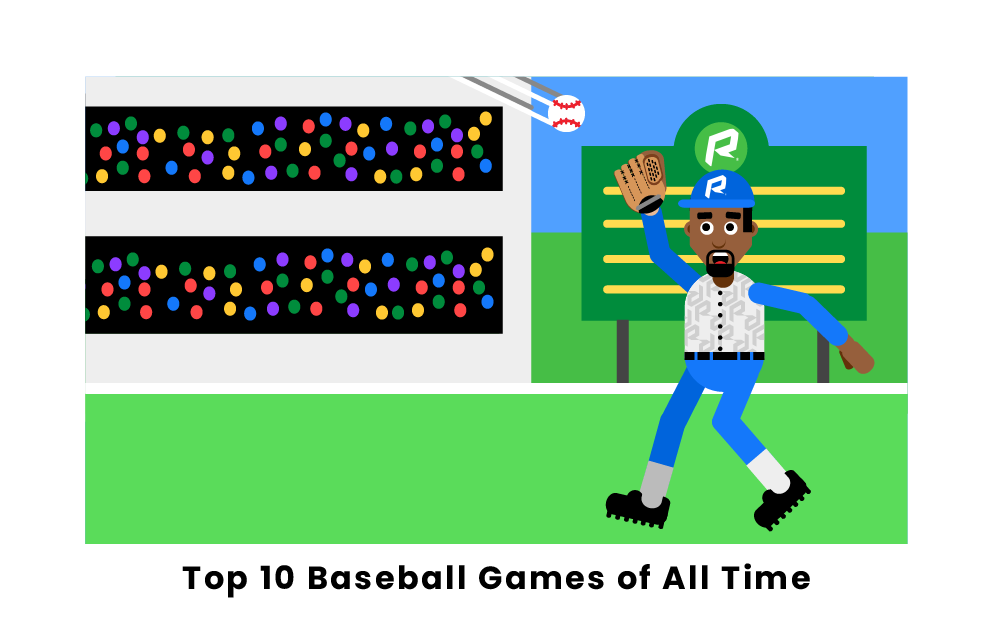 What are the most famous baseball games of all time?

The 2016 World Series championship game is known to be one of the greatest games in baseball history. Before 2016, the Cubs hadn't won a World Series title since 1908. The last time the Indians had won the World Series was in 1948. After the Cubs took a 5-1 lead after the top of the 5th, Cubs manager Joe Maddon made a questionable decision to replace their star pitcher Kyle Hendricks with Jon Lester. Lester struggled on the pitching mound, giving 2 runs to the Indians in the bottom of the 5th.

With the score being 6-3 going into the 8th inning, Cleveland Indian's Rajai Davis hit a two-run homerun to eventually tie the game going into the 9th and final inning. After a first-time ever Game 7 rain delay, the Cubs scored two runs in the top of the 10th and held off the Indians to close out the World Series for the first time in just under 100 years.

Although the 1956 World Series between the Yankees and Dodgers ended up being a 7 game series, the 5th game went down in history as one of the most exceptional pitching performances ever seen. New York Yankees pitcher Don Larsen threw the only no-hitter and perfect game in World Series history. Don Larsen, with the help of the Yankees unstoppable defense, put out 27 straight batters with 7 of those outs being strike outs. In the 4th inning, Mickey Mantle hit a low line-drive home run into right field to score 1 of the only 2 runs scored by the Yankees that game. To close out the 9th inning, Don Larsen struck out the final batter, pinch hitter Dale Mitchel, ending the game with a total of only 97 pitches. To this day, no pitcher has ever come close to his record-breaking performance from that World Series game in 1956.

Game 6 of the 1975 World Series between the Red Sox and the Reds is still talked about to this day between baseball fans. In the first 5 games of the series, 3 of the games were decided by a one run difference. With the Red Sox down 3-2 in the series, the 6th game ended up being one of the most dramatic games in Red Sox history. In the 1st inning, Red Sox center fielder Fred Lynn hit a three run home-run to jump ahead of the Reds. However, the Reds responded with 6 more runs, going up 6-3 into the bottom of the 8th. In the bottom of the 8th, pinch hitter Bernie Carbo hit a 3 run home-run to tie the game at 6 and send the game into extra innings.

After 4 long, intense innings, Red Sox player Carlton Fisk smashed a ball over the left field wall in one of the most memorable walk-offs in baseball history. The Red Sox catcher waved his hands in the air as he rounded the bases, sending the Red Sox into a Game 7 with the Cincinnati Reds.

This final game of the 1991 World Series between the Atlanta Braves and Minnesota Twins went down as one of the greatest pitching duels in the history of post-season baseball. Pitcher John Smoltz of the Braves faced off against Jack Morris of the Twins, both shutting down each other's offense and not allowing a single run during the 9 innings of regulation baseball. In the bottom of the 10th, pinch-hitter Gene Larken stood up to the plate with the bases loaded, hitting a walk-off single to left field and winning the second World Series within 4 years for the Twins.

Although Larkin ended up with the game winning hit, pitcher Jack Morris won the World Series MVP honors. Morris finished the game with 122 pitches, striking out 8 batters and only walking 2. It broke the record for the longest pitching performance in World Series history.

The Pittsburgh Pirates victory over the New York Yankees in 1960 is still remembered today as the craziest 7th game in World Series history. After the first 6 games, the Yankees had shown absolute dominance throughout the series, accumulating a total of 55 runs, compared to the Pirates 17 runs. In the first 2 innings of game 7, the Pirates were able to quickly jump to a 4-0 lead. Throughout the game, the Yankees, being the one of the most powerful teams in the league, slowly responded with more runs and eventually brought the score to 7-4 at the top of the 8th.

In the bottom of the 8th, Pirates players Roberto Clemente and Hal Smith both saved the inning with 5 runs and brought the Pirates back into a 9-7 lead. The Yankees then tied the game at top of the 9th, after Mickey Mantle knocked in and scored a run. Pirates second baseman Bill Mazeroski led off the ninth with a walk-off solo home run, winning the World Series and becoming the first player in MLB history to end a game 7 with a home run.

In 1997, the Florida Marlins took down the powerful Cleveland Indians in a wild 11 inning game, earning it's spot as one of the greatest baseball games of all time. After the first 6 innings, the Marlins fell to a 2-0 lead by the Indians as they struggled to hit against Indian's star pitcher Jaret Wright. In the bottom of the 7th, Marlins third baseman Bobby Bonilla hit a solo home run to make it 2-1. In the bottom of the 9th, the Marlins rallied hit after hit to eventually tie the game and send it into extra innings.

At the bottom of the 11th inning, Edgar Renteria of the Marlins hit a single up the middle with the bases loaded and two outs to win the first World Series ever for the Marlins franchise. Although the Marlins organization was only a few years old at the time, they certainly shocked the baseball world by their strong performance throughout the series.

In 2014, the Kansas City Royals took down the Oakland Athletics in what was known as, at the time time, the longest "winner take all" baseball game in history. After 12 intense back-and-forth innings, the Royals won and advanced to face the Los Angeles Angels and compete for the World Series title. After the Royals went down by 4 runs going into the bottom of the 8th, they were able to rally back to finally tie the game in the bottom of the 9th. 3 innings later, in the bottom of the 12th, the Royals catcher Salvador Perez hit a line drive along the third base line to score the winning run.

The ability of the Royals to come back from such an improbable deficit was due to the team's ability to hit the ball and steal bases, ending the game with a total of 7 stolen bases. The 4-run rally in the bottom of the 8th crowned this ALWC game as one of the greatest in baseball history.

In one of the greatest 10th inning rallies in the history of baseball, the New York Mets won against the Boston Red Sox in game 6, forcing a game 7 which they also won. After the Mets tied up the game at 3 in the bottom of the ninth, the Red Sox were able to score two more runs in the top of the 10th to make their lead even stronger with a score of 5-3. The first two batters for the Mets were put away, leaving Mets' Gary Carter up to the plate with 2 outs. Carter, with 2 strikes in the pitch count, lined a pitch into left field for a hit.

From then on out, the Mets rallied back to tie the game after Kevin Mitchell stole home to tie the game. The following batter went through a 10 pitch count, eventually hitting a ground ball directly through the first baseman's legs in one of the biggest errors in baseball history and winning the game for the Mets. The Met's rally in both the 9th and 10th inning places this game as one of the greatest baseball games ever.

Game one of the 1988 World Series between the Los Angeles Dodgers and Oakland Athletics can be considered one of the greatest games due to Kirk Gibson's impressive efforts to save the game in the bottom of the ninth. In the previous series with the Mets, Gibson had injured both legs and was unable to play the entire game. When the Dodgers were down 4-3 in the bottom of the 9th with 2 runners on base and 2 outs, manager Tommy Lasorda put him in to pinch hit for his first at bat the entire series.

After hitting a foul ball and limping to first base, everyone in the crowd understood how much pain Gibson was in. With the count closing in at 3-2, Gibson hit a walk-off homerun into right field, hobbling around the bases to win the game. To this day, Gibson's power and strength is one of the most impressive efforts seen in baseball.

In possibly one of the greatest back and forth games in World Series history, the St. Louis Cardinals were able to continuously tie the game in the most desperate situations to eventually hit a walk off home-run to win the game. With the Rangers up 7-4 in the 9th, infielder David Freese hit a 2-run triple to tie the game. After Texas then built another lead going up 9-7 in the top of the 10th, the Cardinals rallied to tie the game off of base hits in the bottom of the 10th.

With no outs yet in the bottom of the 11th, David Freese stepped up to the plate again and hit a solo walk-off straight over centerfield. The Cardinals victory provided them the momentum to come back in game 7 and win them World Series champions. The game went down in history as one of the most impressive battles for the Championship title.

What is the best World Series game ever?

The best World Series game ever played was the 2016 World Series Game 7, where the Chicago Cubs and Cleveland Indians fought for a long-awaited Championship title. After rain delays, questionable coaching decisions, and extra innings, the Cubs scored two runs and eventually held off the Indians from scoring in the bottom of the 10th inning. This was the first time the Cubs had won the World Series in just about 100 years.

What is the greatest baseball comeback in baseball history?

In 2004, the Boston Red Sox and New York Yankees, one of the greatest rivalries in baseball history, battled for the American League Championship (ALCS). After the Yankees quickly went up 3-0 in the series, including scoring 19 runs in game 3, everyone believed the Red Sox season was over with. After the 19-run loss, the Red Sox were able to win 8 straight games, beating the Yankees 4-3 in the series, while also sweeping the St. Louis Cardinals 4-0 in the World Series.

Who has the greatest pitching performance in a World Series game?

In the 1956 World Series, pitcher Don Larsen threw a perfect game for the first and only time in World Series history. After 9 innings, all 27 batters that had stepped up to the plate didn't make it on base. Throughout the game, Larsen only threw 97 pitches, while striking out 7 batters. No pitcher in World Series history has ever come close to this record.

Who has the best walk-off homerun in World Series history?

In the 1988 World Series, outfielder Kirk Gibson had badly hurt both of his legs and was on the injured reserve for the entire playoff series. After being down 1 run in the bottom of the 9th, Gibson was put in to pinch hit with 1 batter on base, hitting a 2-run home run to win game 1 of the series. It was the only at bat he contributed to the series, yet hitting a home run with two hurt legs had never been seen before.