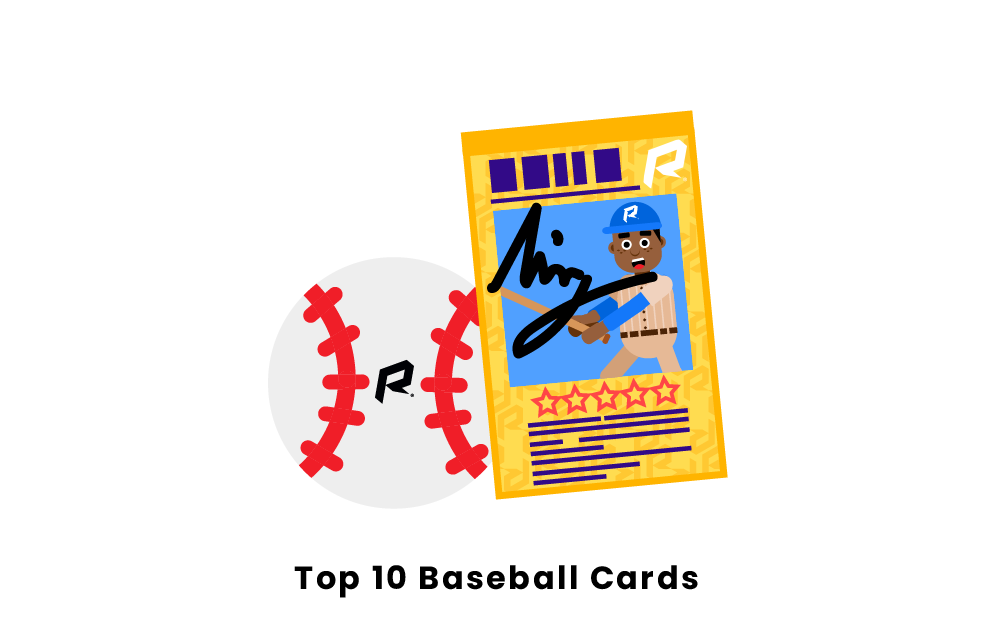 What are the most popular baseball cards?

Maybe the most famous hobby card ever produced, the T206 Honus Wagner is the most sought after baseball card. The T206 card series, created in 1909 by the American Tobacco Company, featured baseball cards slotted into cigarette packs. The T206 Wagner is so intriguing because so very few prints of the card were produced.

The reason for this short print, only about 60 to 200 versions, is ambiguous, but many credit it to either a dispute over using Wagner's name and likeness without any payment or Wagner not wanting to be associated with selling tobacco products. The card is also infamous for the amount of fake and doctored copies of it. Today, the T206 Wagner is more of an investment than a trading card or collector's item as the card, if kept in good condition, grows in price every time the card changes hands.

The rookie card for the number one overall pick of the 1987 MLB Draft has become one of the most significant baseball cards of the late 20th century. The Upper Deck version of the card, featuring The Kid's signature smile, rose above the other versions of Griffey Jr.'s rookie card produced by competitors for a couple of reasons. First, the Upper Deck packs were more expensive than other brands, so fewer people bought the packs. Also, Junior's card was the first card in the series which means it was at the top of the series checklist.

Junior's potential and the iconic photo made it an easy decision to have him at the top of the set. The card gained more fame as Griffey Jr. became one of the best players in the league and literally saved the Seattle Mariners from extinction.

Mickey Mantle's card in the 1952 Topps set has become one of the most recognizable baseball cards in history. Mantle is not only one of the most famous New York Yankees of all time but was also a cultural icon while he played in the Bronx.

Surprisingly, though, his very valuable 1952 card is not from his rookie year, which occurred in 1951. Rookie cards are generally more sought after than the other years of a player's career, but the popularity of the 1952 Topps series sets this Mantle card apart from the 1951 Bowman rookie edition.

Unlike cards such as the T206 Wagtner card, this one is not nearly as hard to find. The accessibility of this card actually benefits its value as it has made it much more famous.

The second card on this list from American Tobacco Company's legendary T206 set, Ty Cobb's card with his name on the cigarette advertisement featured on the back of the card. The T206 set has been called "The Monster" because of the daunting task of collecting the entire set when at the time, these cards were merely add-ons to cigarette packs and were commonly discarded. The absurd value of the red portrait Ty Cobb card comes from the text on the back that reads "Ty Cobb King of the Smoking Tobacco World."

This card was recently in the media after 7 of these ultra-rare items were found in a paper bag in an old home in 2016 and when the family found another in 2018. Coined "The Lucky 7 Find," the discovery greatly increased the number of this specific Ty Cobb card from 15 known cards to 23.

It is no surprise that "The Great Bambino," or Babe Ruth, graces one of the most valuable baseball cards on the market. The card, printed by newspaper company "The Sporting News," is Ruth's rookie card which adds even more value.

Other than being a rookie card of one of the most famous baseball players ever, this card is also unique for other reasons. For example, Babe Ruth is known for his home run hitting ability, specifically when he predicted a home run in one at-bat, but the card was printed when Ruth still pitched. Also, the card features Ruth on the Boston Red Sox, while he is mostly known for playing for their fierce rivals, the New York Yankees. This Babe Ruth card is an important relic from a time before he revolutionized the home run and the game of baseball as a whole.

As one of the most important athletes ever and a warrior who withstood horrible slurs and acts of racism, Jackie Robinson's rookie card from the 1948 Leaf card set signaled a change in America's pastime. While cards like the 1952 Topps Mickey Mantle and 1989 Upper Deck Ken Griffey Jr. are iconic due to their timeless photos and art of generational talents on the baseball diamond, this card speaks more to history than baseball.

Of course, Robinson's in-game legacy as one of the best hitters of the mid-20th century does not hurt the value of this card either. More importantly, though, this card is a cultural artifact from one of the most important moments in baseball that changed the world of sports indefinitely.

Another example from one of Topps's legendary series from the 1950s, the late Roberto Clemente's rookie card still increases in value every year. Clemente's card also signals a change in the look and aesthetic of baseball cards that Topps helped pioneer in the 1950s with its green-to-white gradient background with both a facial photo and action shot printed on the horizontal card. With a charming and colorful background to complement all of the player's statistics and a cartoon, the 1955 Topps series gave more personality to baseball cards.

The card's popularity was also aided by the respect fans have for Clemente following his tragic death in 1972. Clemente was a known humanitarian who constantly volunteered to help with charities when he died in a plane crash heading to Nicaragua after a devastating earthquake. This event coupled with his philanthropic and baseball legacy have helped this card hold value for decades.

Derek Jeter, the face of the New York Yankees' late-1990s and early-2000s dynasty, was a staple of both baseball coverage and tabloids for over a decade. Due to his widespread appeal to baseball fans and socialites, his baseball cards throughout his career were prominent pieces in fans' collections. Because this card was printed in his rookie year and other interesting qualities of this edition, the Upper Deck SP foil card is his most important baseball card feature. Its slick foil front showing an action shot of Jeter completing a play from the shortstop position and the gold "Premier Prospects" logo in the bottom right corner distinguishes this version of his rookie card from the others, making it more rare and lucrative.

This Jeter rookie card also holds more value because of the degree of difficulty in keeping the card in mint condition. Due to the card's foil exterior, it ages much faster and noticeably than typical cardboard baseball cards.

The 1948 Stan Musial "Rookie" card is one of the first post-war cards to gain value and fame. The card art is not very noteworthy as it simply features a photo of Musial, but the context gives this card more meaning than its counterparts in the 1948 Bowman set. Due to the need for paper in wartime manufacturing, baseball cards became much rarer to find during the years of World War II. As a result, Stan Musial did not have a baseball card until his seventh season in the big leagues.

This Bowman Musial card highlights how baseball card manufacturing dipped during World War II as one of the best players in baseball, who already established himself as a top player by winning two World Series and two Most Valuable Player Awards, did not have a card yet. The 1948 set was also revolutionary as it established Bowman as the premier card brand to collect rookie players and prospects, a status that the company still holds to this day.

Bryce Harper was easily one of the most hyped baseball prospects of the 2010s. As a result, his autographed Bowman Chrome card took the collecting world by storm and immediately became one of the expensive cards of the set. This card is significant as it shows the business side of the hobby that seems to dominate it today. Collectors look to pinpoint prospects that will have fruitful careers to later profit by selling their rare cards. Paired with the 21st century trend of autograph and memorabilia cards, this card became an immediate treasure on the marketplace.

Despite the fact that Harper is still one of the most popular and skilled players in the MLB, the card's value has fluctuated because of the high prices that auctions of the card started with in 2011. Regardless, this autographed card showcases the goals and reasons for collecting baseball cards today, and how the role of these cards has changed since the early 1900s.

What types of baseball cards are worth the most money today?

Outside of a few rare rookie cards greatly appreciating in value, most of the expensive cards today are limited to a few copies and have special features that hobbyists look for. These cards have autographs or pieces of uniforms that have been worn by the player. They give collectors a special connection to the player by giving them a piece of memorabilia that not everyone can own, increasing their price and rarity.

What are the highest prices baseball cards have sold at?

The most expensive purchase of a baseball card as of today occurred in 2016 when a T206 Honus Wagner sold for $3.12 million. Just under that massive price tag was the sale of a 1952 Topps Mickey Mantle that sold for $2.88 million in 2018. In the same year, a 1951 Bowman Mickey Mantle sold for $750,000. These cards were all in great condition relative to other versions of the same card.

How do baseball cards hold their value?

Baseball cards hold their value based on the player's performance and popularity in the media. Also, the condition of the card greatly influences its price. Even if a card is rare, if it has been treated poorly, the card's value diminishes greatly. Because of the quickly depreciating value of baseball cards, collectors generally put cards into protective sleeves as soon as they open the packs so as to not harm the card in any way.

How do I start collecting baseball cards?

Starting a baseball collection is as easy as going to your local sports goods store or an online vendor and buying packs of cards. While the most expensive cards go for over one million dollars, a pack of cards is usually less than five dollars. New collectors can also use apps like Topps BUNT to collect virtual cards that come without the risk of ripping or losing your cards.