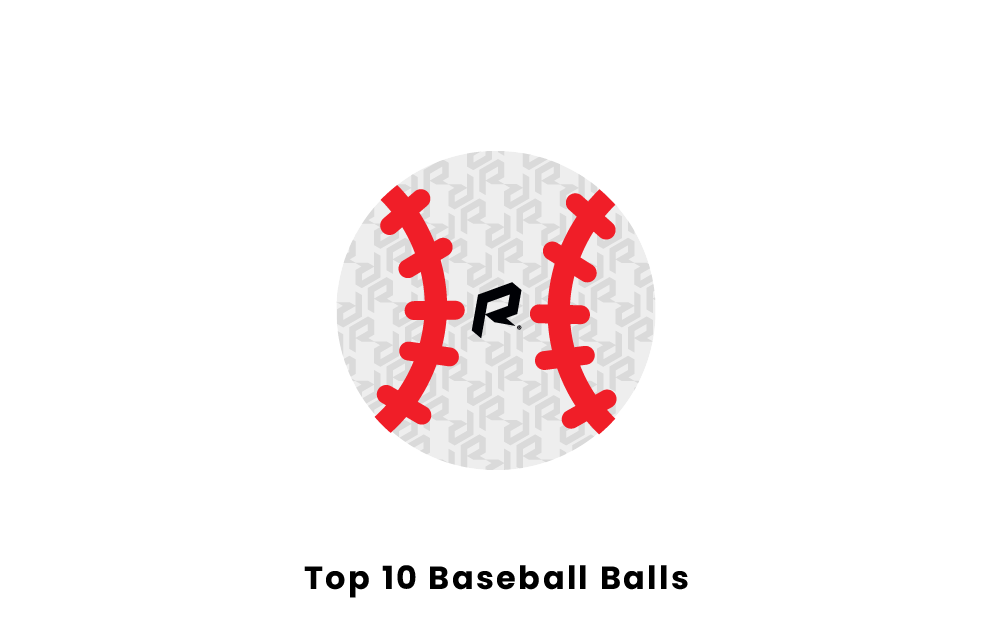 Choosing the right baseball can be a process. There are lots of brands to choose from. Some have been around for decades while others are newer and boast unique technologies and materials. Below, we will cover the best baseballs and the baseball brands that sell them.

What are the most popular baseball balls? 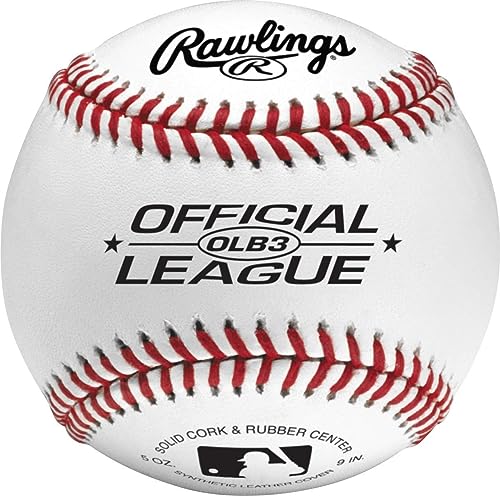 If there is one brand of baseballs you should know it’s Rawlings. Rawlings makes the official baseballs for pretty much every baseball organization you can think of. Major League Baseball and Minor League Baseball use special Rawlings baseballs with a special MLB or MiLB print on them. Rawlings makes the MLB baseballs in Costa Rica and produces 80,000 boxes per year (12 baseball’s per box) for the MLB.  The MiLB baseballs are not made in the same Costa Rican factory, these balls are produced on the other side of the world in China. The NCAA also uses Rawlings brand baseballs. The official Little League World Series Baseball is also a Rawlings ball.

Rawlings is primarily known for making baseballs, though they do produce other equipment like gloves. If you buy a rawling’s baseball you can spend about $50 for a bucket (24 balls). If you want to buy official MLB baseballs or NCAA baseballs this will cost a bit more, about $5-$10 per baseball. 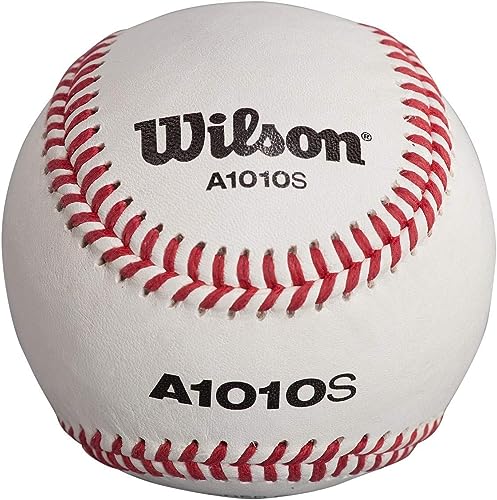 If Rawling’s is the undoubtable number one baseball maker in the world, then Wilson is an obvious number two. The two companies have been competing in the baseball world for a long time. In the MLB the top two gloves companies are Rawlings and Wilson. When it comes to baseballs specifically, the competition is a little more one sided. Rawlings is the official baseball for a significant number of leagues. That hasn’t stopped Wilson from making lots of baseball’s though. The Babe Ruth League, for one, uses Wilson for their official baseball. USSSA Baseball and Cal Ripken Baseball also use Wilson. However, the most popular use for Wilson baseballs is for more casual leagues and playing at home. 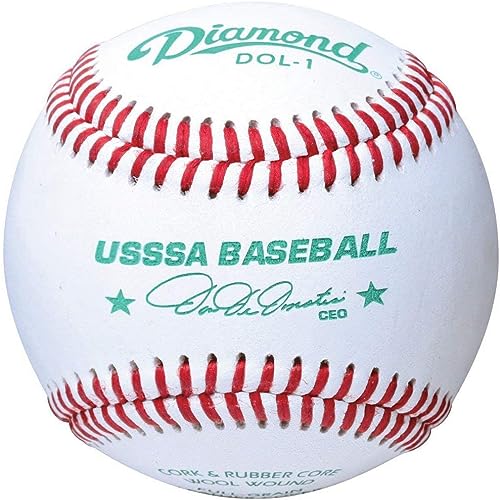 After Rawlings and Wilson there isn’t that much name recognition in terms of baseball brands. Of the lesser known baseball brands there is no doubt that Diamond is the best and most used. Diamond specializes in high quality youth and high school baseballs, knowing that that is their most common customer base. Diamond also provides baseballs to the Babe Ruth League, American Legion, and Little League. Their best selling baseball is the D1-HS ball. The most high quality ball is the D1 Pro High School baseball. Diamond also sells training equipment including training baseballs. Their inventory includes the Reaxn baseball, to help players improve their reaction time. Diamond sells oversized and undersized training balls as well as dotted balls to help both pitchers and hitters work on their fundamentals. Diamond Baseballs are more affordable than the bigger brands, going for around $35 for a dozen and $80 for a bucket. 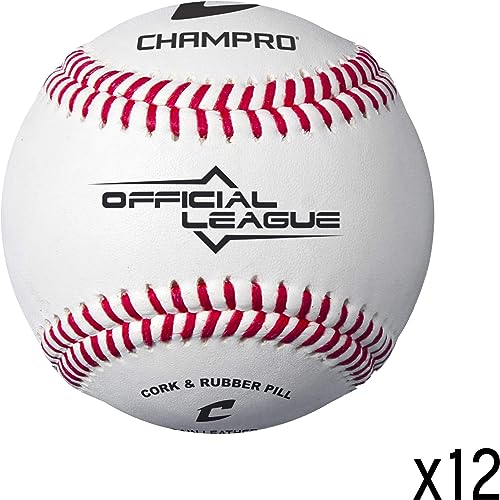 If you’re looking for a big selection of baseballs, both for games and practice then look no further than Champro. It may not be a company that has a lot of name recognition. In fact it might not be a brand you will see on any official baseball fields. Champro’s website includes details of every baseball that they sell including the type of leather, the stitching and more of the baseball. Their baseball’s range from high school and pro models to little league and other balls. Champro also carries practice balls for all levels and age groups. Champro has soft practice baseballs, yellow balls, all-weather balls, weighted balls, pitching balls, batting practice balls, machine balls and more. Champro also differentiates between raised and flat seamed baseballs. Some players, especially pitchers, prefer a flat seam, while others prefer a raised seam. Champro lets you choose when you buy the ball. Champro baseballs will cost you about $40-$50 per dozen. 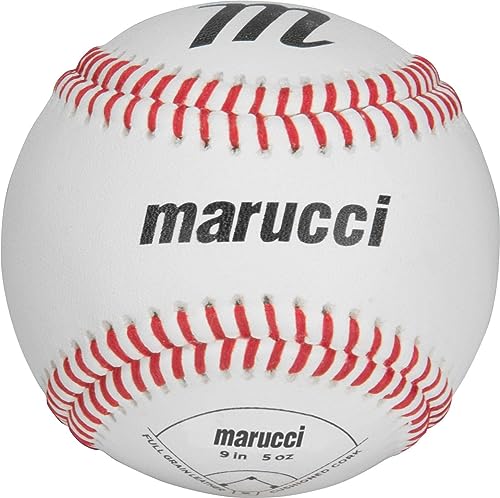 When you think of Marucci Baseball the first thing that comes to mind is probably their bats. Marucci is a well-known bat maker and a staple of professional baseball, including the MLB, when it comes to bats. However, Marucci is more than just a bat company. When it comes to baseball, Marucci makes gloves, protective equipment, clothes, training gear and even baseballs. Marucci has a smaller selection of baseballs and even less popularity. The only official baseball that Marucci carries is with USSSA Baseball. However, Marucci does have a game certified ball, an adult ball and a youth ball option. Marucci baseballs are made of top synthetic materials. Their balls are allowed in some leagues, and though they are not popular they get the job done. Marucci baseballs will cost about $50 for a dozen and they do not come in a bucket. When it comes to official baseballs, Marucci should probably be your last choice. There are no practice balls either. 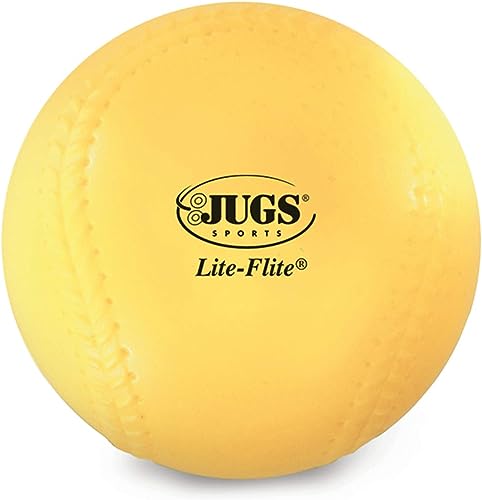 When you think of JUGS you probably think of a machine. JUGS has revolutionized machines for firing out both baseballs and footballs. Every team in both the MLB and the NFL owns at least one JUGS machine. For baseball, pitching machines are capable of recreating 90 mile per hour fastballs as well as slow curveballs, hard sliders, and just about anything else you can imagine. Though the bread and butter of JUGS is their machines, the company realized that the best way to ensure successful use of their machines was to make baseballs to go with it. JUGS produces two kinds of baseballs, hard balls made for their machines and soft practice balls. Both are designed exclusively for hitting practice and probably should not be used for any other purpose. Other baseballs can be used in a JUGS machine though, and since JUGS charges over $300 for their machine balls, it might be best to go another route. 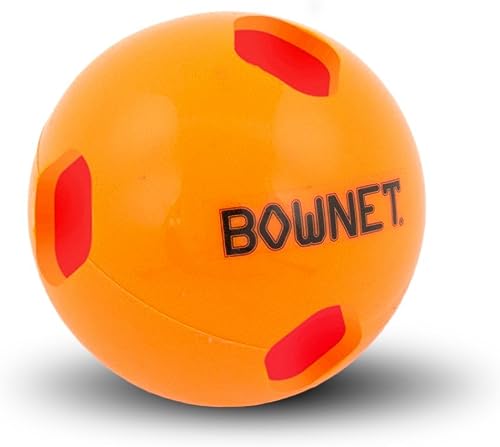 Much like JUGS, Bownet is a company known for producing high quality training equipment for baseball players and teams. Their most well-known products, as their name suggests, are nets for hitting practice, pitching practice and more. Much like JUGS, if you want baseballs you also can turn to Bownet. The difference is that Bownet does not only make training balls. Their selection of baseballs includes raised and flat seamed baseballs for games, practice, hitting, and pitching. Bownet baseballs are officially certified for high school and other league games. They come in raised and flat seamed options for people who have a preference. Bownet is probably more known for their training equipment. Bownet carries a variety of different types of batting practice baseballs, including a kevlar reinforced baseball that is durable and strong. Bownet baseballs are fairly affordable, costing about $40 for practice balls and $50-$60 for game balls. 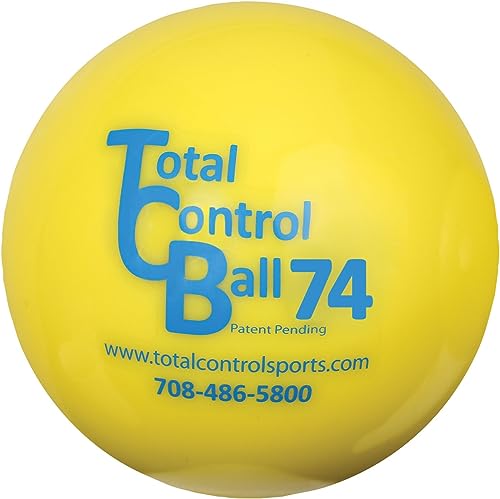 If you are looking for weighted balls, the perfect company you will find is Total Control Baseball, also known as TCB. TCB does not make the classic white baseballs you see in games and practices but they do produce yellow training balls that are perfect for a baseball player at any level. The traditional TCB ball comes in two forms, number 82 and number 74. The 74 is 2.9” in diameter while the 82 is 3.2” though they weigh the same. These weighted baseballs can be used for throwing and improving arm strength but are more traditionally used for hitting drills and adding power to your swing. That’s what makes TCB practice balls different from other weighted balls, they’re durable enough to hit with a bat. TCB also makes dotted baseballs for hitters and lightweight baseballs with holes in them. TCB practice balls cost almost $10 for the 74 and 82 model and $3-$5 per ball for the lightweight model. 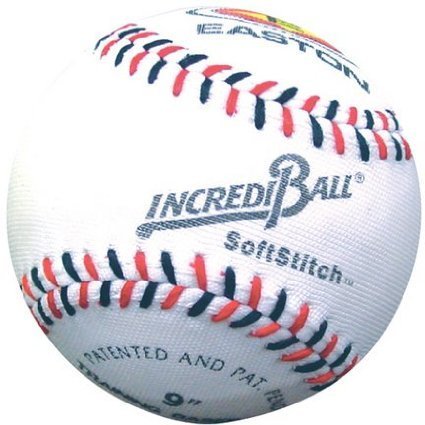 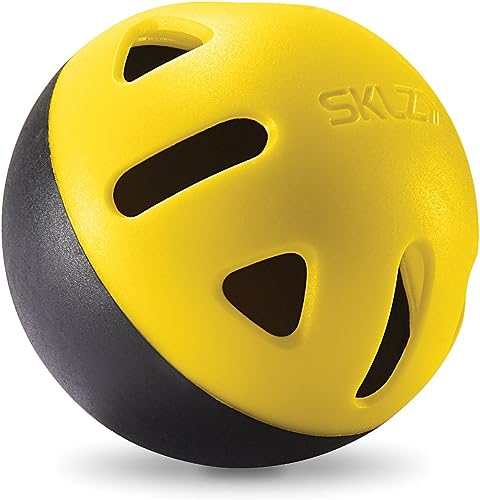 SKLZ is a sports equipment training company that produces a wide range of products across sports like baseball, basketball, soccer, and football. Their practice balls are designed for warming up on the field and improving hand-eye coordination. SKLZ practice balls are heavier than other practice baseballs on the market and designed to help you get feedback on your swings and pitches. They are made of a proprietary material that won’t crack or break. You will be surprised by how they feel coming off your bat. For a $20 price tag for a box of 12, you can’t beat the price.

Baden is a sports equipment brand that produces a wide variety of gear for a number of different sports. While not necessarily a household name in the baseball balls industry, Baden offers top-notch training balls that make for great practice equipment. Most interestingly, Baden makes an all-weather baseball that is said to have the fastest recovery to playable condition out of any baseball manufacturer. This means that rough weather and use won’t render this ball useless, and really brings long-term utility for your buck.

Hit Run Steal offers a wide range of training equipment, and their training baseballs are top notch. Their balls are durable and are regulation size, providing an accurate feel that will help players best prepare for games. Additionally, Hit Run Steal also offers weighted hitting balls. These balls are heavier than the standard ball found in games. This added weight helps hitters practice squaring up on the ball and generating power.

Spark Catch offers a unique spin on the standard baseball with their light up baseballs. These balls enable players to practice in darker conditions, but still sport the same weight as a league regulation ball. These balls feature four LED lights, which provide good visibility and help ensure safety when practicing in the dark. While you probably won’t see these balls being used in organized leagues, they’re great for kids and offer a unique practice experience!

What is the best brand of baseballs?

If you want the highest quality game baseballs, Rawlings is undoubtedly the best company. They make the official baseball for the MLB, MiLB, NCAA, and more. They are the largest producers of baseballs in the world. If you are looking for cheaper baseballs at the high school level or below, Diamond is your best bet. If you want practice balls, JUGS, Bownet, and TCB are all great options depending on the style you are looking for.

How big is a baseball?

An MLB baseball has a circumference of anywhere from nine to nine and one quarter inches. Most baseballs you see for high school, college, and even little league will be of that same specification. However, practice balls can vary drastically. Some hitters like using small balls, about the size of a golf ball, to improve hand-eye coordination when hitting. Other players even practice hitting with beans. For pitchers, heavy balls are often employed to improve arm strength. Most of these will be the same size as a baseball but can be up to twice the weight. Some are bigger, closer to the size of a softball. That all depends on what you personally like to use.

What brand of baseball is used in the Little League World Series?

The official baseball provider of the Little League World Series is Rawlings. The Little League World Series is not unlike its older counterpart in that they have a deal with Rawlings and have their own printed baseball for the entire tournament. However, Little League teams across the world are not using Rawlings official printed baseballs until they actually reach the tournament in Williamsport. Other little league baseballs are made by Wilson, Diamond, Champro and even Marucci. These are all the proper measurements and are official game certified.

What baseballs should I buy for my high school team?

The brand and model of baseball used by high school teams varies depending on the league and the location of the team. Some teams that travel and play in international tournaments want to have a standardized brand and official baseball. In more local high school leagues, a ball just has to be official and the umpire has to approve of its use. Most of the time the league will provide baseballs or information as to which baseballs you have to buy. Rawlings, Wilson, Diamond, Champro and Marucci are all brands that make official high school baseballs.