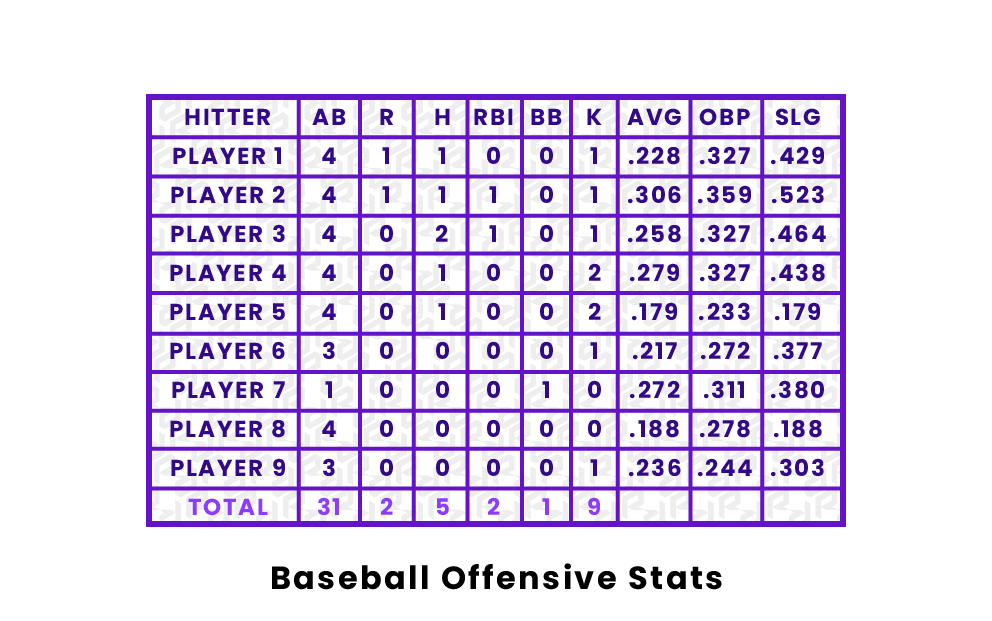 In baseball, there are a variety of statistics which fans and coaches can use to judge the quality of certain players, and of overall teams. These stats enumerate important aspects of a baseball game, and how well a player is doing by each standard. Baseball stats are generally divided into two categories: offensive and defensive stats. Below, we will take a look at offensive stats, breaking them down into their different categories, and examining what each stat means.

The following offensive statistics are generally considered the most important offensive stats for any baseball player, and are usually among the first seen on their profiles or records:

The number of times a player reached a base as a result of fielder’s choice, a hit, an error, or was put out on a non-sacrifice play.

The number of times in a game that a player completed his turn at batting, regardless of the result of that turn.

The number of times in a game that a player crossed home plate to score.

The number of times in a game that a player safely reached base after hitting a ball.

Extra-base hits are hits in which the batter is able to reach at least second base without the help of an error or fielder’s choice. Extra-base hits include doubles, triples, and home runs.

The number of times a player was allowed to advance automatically to first base after receiving four pitches that are called balls by the umpire. Also known as a “base on balls” (BB).

The number of times a player was deliberately walked by pitchers, usually as a means of avoiding pitching to a dangerous batter in a big spot or setting up additional force outs defensively.

Strikeouts (SO or K)

The number of times a player received three strikes while at-bat, earning an out.

Batting average (abbreviated as BA or AVG) is one of the most standard and commonly used statistics to measure a batter's offensive performance. Batting average is the measurement of how many times, on average, a player gets a hit every time he is at bat. It is calculated by dividing a player's hits by his at-bats, with the following formula:

The more complete version of the formula includes what exactly is considered a Time on Base or a Plate Appearance. Here is the detailed formula:

Since on-base percentage incorporates walks as well as hits, a player's OBP is usually higher than his batting average. An average OBP is around .320, and what would typically be considered a good OBP is around .370 or over.

As you can see, doubles are counted twice as much as singles because the batter earned twice as many bases for that hit. The same principle applies for triples and home runs. Therefore, SLG is used as an indicator for how well a player hits for power, in other words, how frequently he hits multi/extra-base hits during his at-bats.

Since it provides a broader overview of a player's performance than just the OBP or the SLG, and is more detailed than the batting average, OPS is one of the most commonly referenced offensive statistics.

Doubles are extra-base hits in which the runner reaches second base. It is important to note that runners who pick up a base hit but then proceed to second base on an error or a throw to another base in the infield are not credited with a double.

Doubles are extra-base hits in which the runner reaches third base. It is important to note that runners who pick up a double but then proceed to third base on an error or a throw to another base in the infield are not credited with a triple.

The number of times a player hits a ball farther than the outfield fence and scores as a result.

The complete number of bases gained by a batter over the course of his career.

The number of times a baserunner advances a base he did not reach by hitting or by another batter advancing him. Bases are most commonly stolen while a pitcher is throwing a pitch. For example, if a player hits a single, he gets a stolen base if he safely reaches second while a pitch is being thrown.

The inverse of stolen bases, caught stealing (CS) represents the number of times a runner has attempted to steal a base and been thrown out. This does not include scenarios in which a runner successfully steals the next base but then attempts to reach the base after that, only to get tagged out.

The number of times a batter hits a ball that results in multiple outs on bases over the course of one play.

The following are more advanced metrics used to measure a batter’s value on the field outside of standard counting stats and common averages. These metrics are widely featured in the new wave of sabermetrics in baseball.

Wins Above Replacement is an offensive statistic that assesses the value of players by enumerating how many more wins they are worth than a replacement player of the same position. For example, the WAR of an MLB first baseman attempts to determine how many more wins that first baseman could give a team than a Minor League first baseman, or a first baseman who is currently a free agent. The value of a player’s WAR also depends upon the position itself, with positions that see lower levels of performance from replacements (such as shortstops) generally having superior WARs to positions where replacements are generally at the same skill level as roster players (such as first basemen).

In order to calculate WAR, the following formula is used for position players:

Batting Average on Balls in Play (BABIP) is an advanced version of batting average that only takes into account at bats in which the batter hit the ball in play. This statistic is meant to measure luck or lack of luck relating to just how often balls a batter puts in play end up being fielded for outs, as well as helping to deduce just how often batters are hitting the ball hard and subsequently getting base hits.

The formula for Batting Average on Balls in Play is:

Isolated power is a statistic which measures a hitter’s raw power. It considers only extra-base hits, and emphasizes the different types of extra-base hits differently. For example a player who goes 1-for-5 with a double would have an ISO of .200, as would a player who goes 2-for-5 with a single and a double, but also a higher batting average than the first player. The formula for ISO is:

On-Base Plus Slugging Plus (OPS+)

OPS+ attempts to normalize the standard of OPS across the entire MLB, also accounting for factors such as different ballparks. With OPS+, a score of 100 is considered the league average, with 150 being 50 percent better than league average. The formula for OPS+ is:

Average exit velocity (EV) is a statistic used to measure the average speed in which a batter hits the ball. Exit velocity has become a major part of how scouts and fans assess a player’s hitting ability, as players who hit the ball at higher speeds are more likely to get hits than those who don’t. Average exit velocity can be determined by adding up the sum of all a batter’s exit velocities and then dividing that number by the number of batted ball events a batter earned.

Weighted On-Base Average (wOBA) is a weighted version of on-base percentage that attributes more points to a players average when they get a hit that earns them extra bases or in some way increases the odds of a run being scored. This statistic is meant to gain a general grasp of what a player’s offensive value is.

The formula for calculating wOBA, with the term "factor" indicating the run expectancy of a batting event, is:

A batter’s wRC+ statistic takes their number of runs created and applies an adjustment to it in order to account for various factors that may have influenced their ability to create runs, including, but not limited to factors such as the ballparks they played in and the era in which they played. This statistic attempts to correct for various factors such as power-hitting eras (including the aptly-named Steroids Era) that may have made certain groups of players more likely to create runs than players of other times and places. This allows for a more general standard by which to compare players on run creation. The formula for calculating wRC+ is:

What is an average OPS in baseball?

What is considered a good slugging percentage in baseball?

What is a good OBP in baseball?

Generally speaking, any OBP of over .350 is considered very good in baseball, as that means the batter in question reached base well over a third of the time. The OBP leader in 2021 was Juan Soto with a mark of .465, which is a godly rate in which he reached base in nearly half of his at bats. For comparison, the average OBP in 2021 was .317.