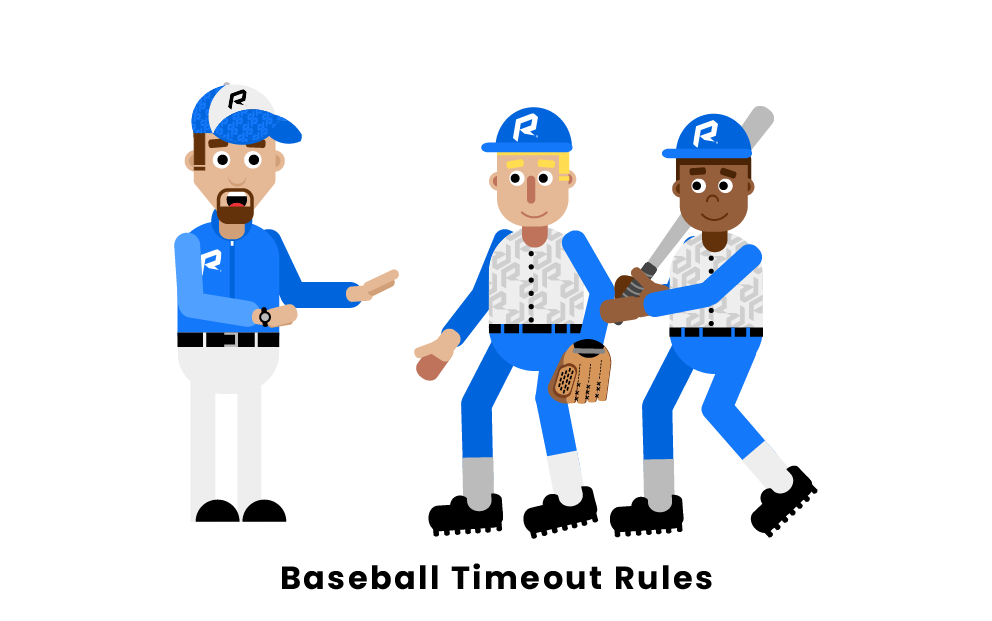 What is a Timeout in Baseball?

In Major League Baseball, a timeout is a halt of play. This action officially stops the ball. During a timeout, coaches usually talk to their players about upcoming plays or to rally their athletes in times of distress. For example, a timeout can be called if something is in the batter’s eye like dust or an insect, to give the batter more time to prepare to rival a pitcher, or to readjust equipment like elbow guards.

For the baseball teams, all of the active players, as well as some of the inactive yet present players, are called to the dugout by the coach to discuss strategies, tactics, or an overall morale boost.

Who Calls a Timeout? 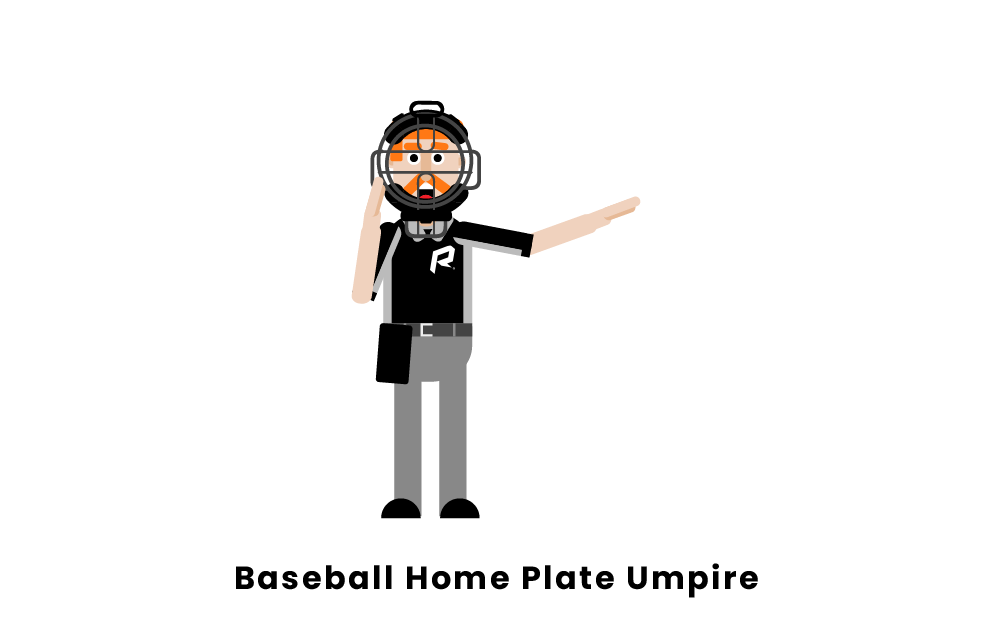 Both baseball managers and players can request a timeout during a game, but it must be approved first. This is typically done by the umpire behind home plate.

When both teams are finished with their use of the timeout and the game is ready to continue, the umpire-in-chief gives the call to begin again.

What Happens During a Timeout?

During a timeout, the umpire addresses any concerns with the field, such as making sure the paths to the bases are visible and that home plate is clean.

The managers of the baseball teams must indicate their team is good to go to the crew chief umpire for the timeout to officially be terminated and for the game to resume normally. 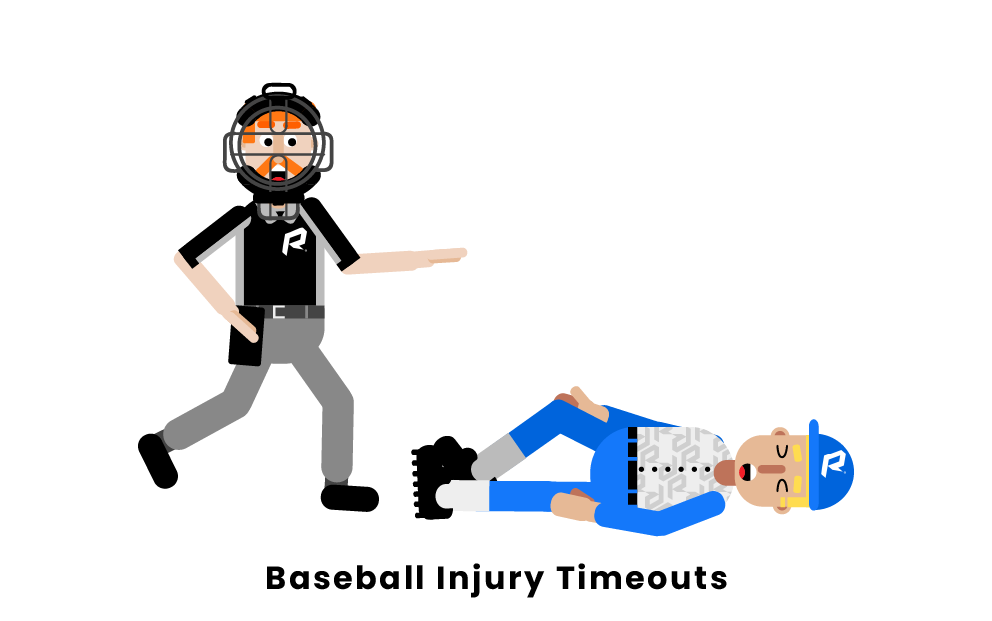 If a timeout is related to a player receiving an injury, the timeout is permitted to last as long as it takes for a team trainer to assess the player on the field and escort them back to the locker room. Sometimes, a coach or manager will continue the delay of the game momentarily after the injured player has been removed from the field of play in order to check out the player’s conditions and rearrange the roster accordingly. In the event the injured player is a pitcher, the new pitcher that enters the game is permitted as many warm-up pitches from the mound as necessary in order to begin pitching in the game. 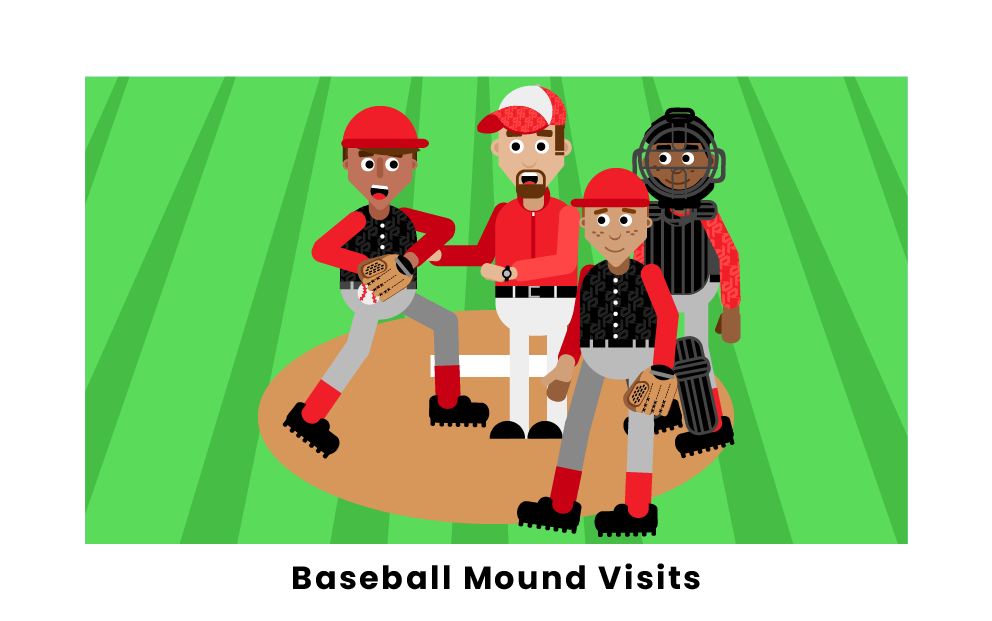 Once per half inning, outside of substitutions or injury concerns, a manager or pitching coach can make a mound visit to confer with their pitcher. These meetings are brief, no longer than about a minute, but typically consist of the coach conferring with their pitcher on strategy, whether or not they are starting to experience arm fatigue, and other basic discussions one might have prior to an at bat. 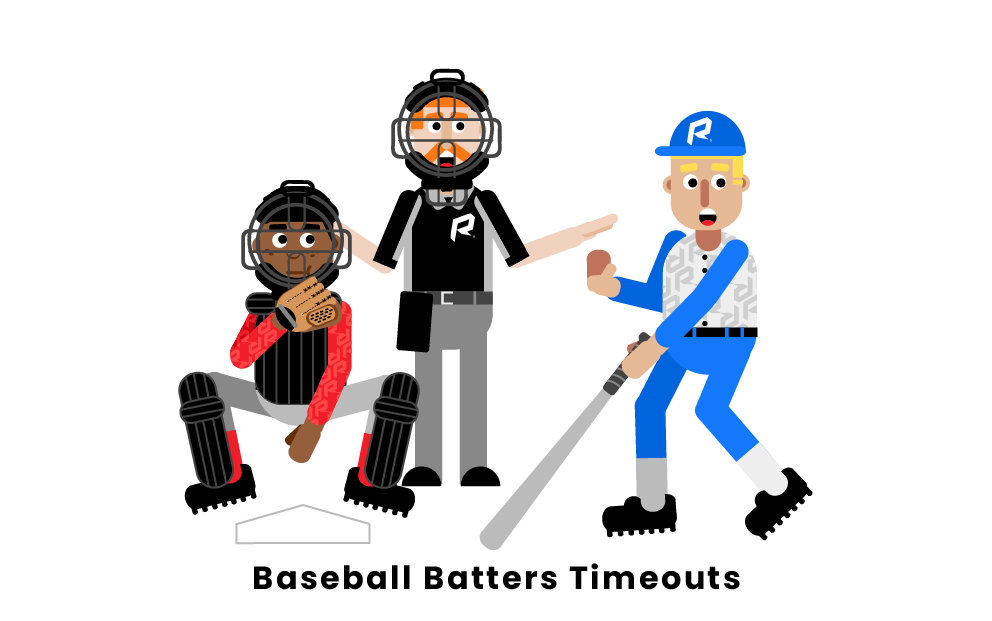 During an at bat, batters can call a timeout while standing at the plate. Typically, while still facing the batter, they’ll hold the hand they hold on top of their bat grip backward to get the umpire's attention. However, like any other timeout, the umpire is the one who decides whether or not to grant it. So, batter’s need to stay ready to hit until the umpire acknowledges the request for a timeout; otherwise, they could be caught off guard and take a strike. These timeouts are typically used to get something out of their eye, adjust protective equipment, or reset when a pitcher takes a particularly long time to make their pitch. 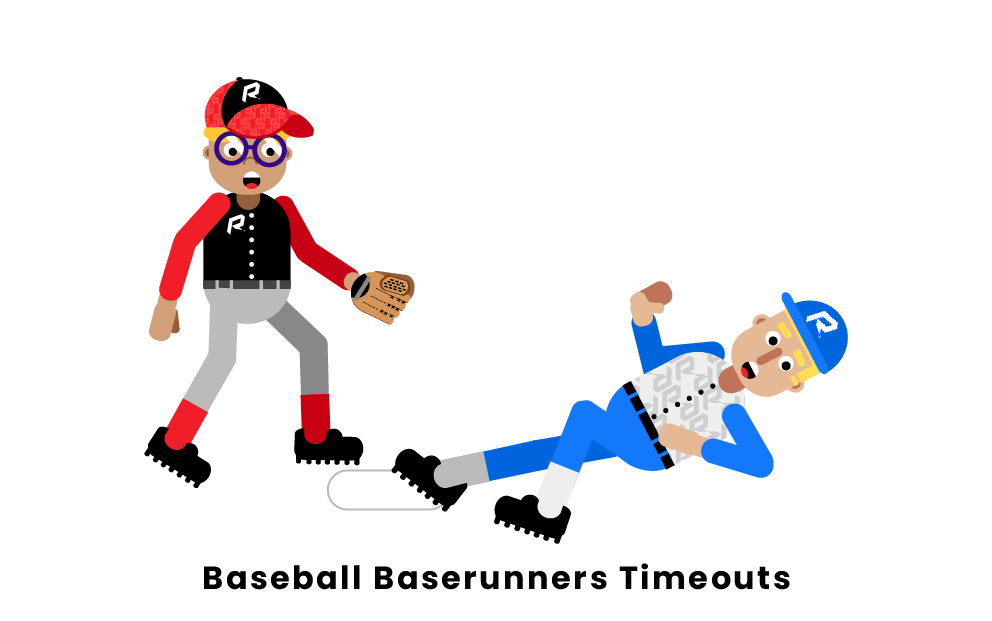 Baserunners are also able to call for a timeout. Most commonly, they will call for a timeout after diving or sliding into a base. These timeouts are called so that the baserunner can stand back up and dust themselves off without fear of being tagged out. Similar to a batter timeout, baserunners will typically hold up a hand (while their other hand remains on the base) and wait for the nearest umpire to grant them a timeout.

Outside of timeouts called by an umpire or requested by a coach, the weather can also cause a stall in the game. In the event of rain or thunder/lightning, the home plate umpire will step back and wave their arms while announcing that the game will undergo a rain delay. These delays can range from ten minutes to hours, and sometimes the game will ultimately be called off altogether if the weather shows no sign of improving anytime soon.

What are the Rules of a Timeout?

Baseball teams are allowed as much time as they need after the umpire confirms the timeout, within reason. Some umpires decide to use the hand signal for a timeout, and this signal is both hands held up in the air. Other umpires use vocal calls while others decide to use both. The umpire’s vocal call is, “Time!” and thus the ball is considered “dead.” This means that the ball is not active and that the game is temporarily halted. So, the ball cannot be used to tag anyone.

Upon the end of the timeout, the umpire-in-chief announces, “Play ball!” The umpire-in-chief can also use a hand signal which is essentially the umpire bringing their hand back and forth in a beckoning motion towards their body. Upon the verbal call or signal, gameplay is to continue normally.

When can you call a timeout in baseball?

How many times can you call a timeout in baseball?

Technically speaking, you can call a timeout as many times as you’d like during a baseball game. However, each timeout called has to first be approved by the umpire. So, theoretically, if the umpire felt a team or manager was being too frivolous with their timeouts, they could opt not to grant them a timeout at any point.

When can a batter call time in baseball?

A batter can call time at any point in between pitches. However, like any other timeout in baseball, it needs to be approved by the umpire. So, the batter must stay alert and ready to hit until they hear the umpire call time. Otherwise, they could step out of the box without being granted a timeout and end up taking a strike.