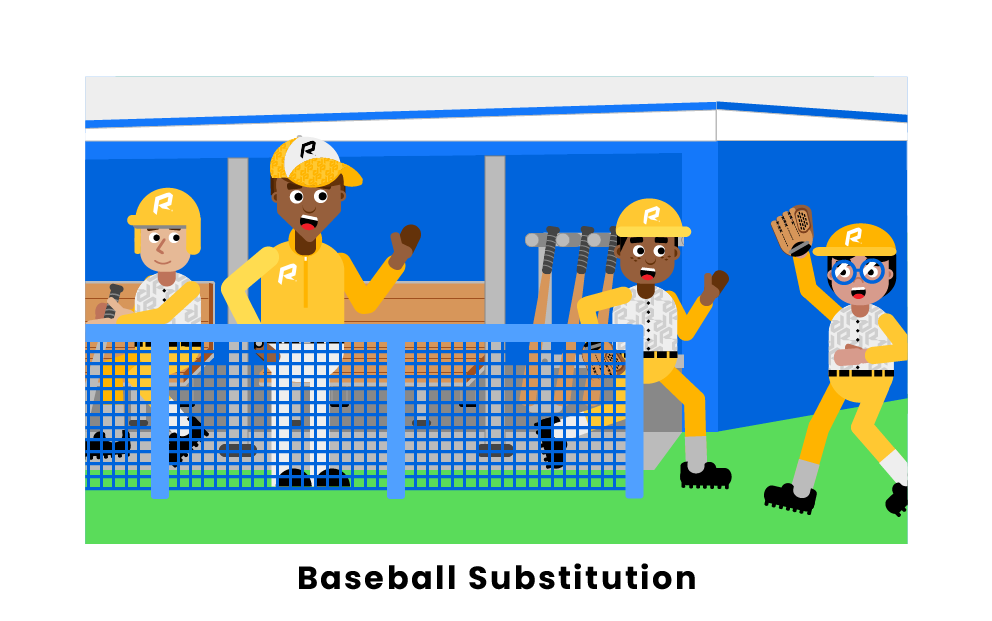 We've already learned that a baseball game lasts nine or more innings and teams have nine players on the field. We also learned that baseball teams have both a 26-man roster and a 40-man roster. However, these nine players do not all tend to play the entirety of the game; some of them will most likely end up being subbed out. A substitution is the act of replacing one or more players of a team on the field with players from the dugout located beyond the foul lines. Of course, these players have to be on the 26-man roster.

The following are possible substitutions teams can make:

Teams can make unlimited substitutions throughout the course of a baseball game. However, once a player is substituted for another player, the substitute takes the spot in the batting order of the removed player, and the removed player cannot return to the game.

Players who are currently in the game are not allowed to be substituted for another player in the game.

Sometimes, managers will substitute one player in for another late in a game in order to improve their defense. This is commonly done in close games, where one defensive blunder could be the difference between a loss and a win. This can be a bit of a gamble though, because if the other team ties things up, the manager will likely have downgraded offensively.

Additionally, some players will take the field mid-inning because of an injury to one of their teammates. In the event of an injury substitution, fielders are given five warm-up throws before play commences.

A pitch limit is a strategy used by managers to maximize pitcher performance. It is a defined number or range of total pitches that managers make to determine how much playing time a pitcher should get before they are substituted. It is based on how many pitches are thrown by a pitcher on any given day and how many pitches they’ve thrown in the last 5-7 days.

While outdated now that both leagues in Major League Baseball feature designated hitters, the double switch is a slightly more complex substitution tactic managers can use to improve their lineup while also replacing their pitcher. In short, the manager replaces one position player with their desired new pitcher and their current pitcher with a player who can play the position of the other fielder who is being subbed out. This allows the manager to manipulate their lineup so that their pitcher slot in the lineup doesn’t get as many at-bats and is commonly used late in games so that managers don’t have to worry about their pitcher stepping up to the plate in a big spot.

In the event of an ejection, the manager will have to sub a new player into the field. The rules surrounding this substitution are the same as any other substitution, so the umpire must be informed of the new player entering the game before the player takes the field.

Additionally, if a manager is found to have substituted a player that has previously been removed from the game, that manager will be ejected.

How are baseball substitutions shown in a scorebook?

In a scorebook, baseball substitutions are demonstrated in a very clear and easy-to-understand way. The player being subbed into the game has their name and game statistics placed directly below the player they replace, with their name slightly indented. If they are a pinch runner, they will have “PR” next to their name. If they are a pinch hitter, they will have “PH” next to their name. If they remain in the game after their at bat or turn on base, they will also have the abbreviation for their position written next to the “PH” or “PR.”

Can you substitute a batter in the middle of an at bat?

Is there a limit to substitutions in baseball?

There is no hard limit on the number of substitutions a manager makes in a game of baseball. However, there are only 26 players on any given MLB roster, so managers can only make as many substitutions as they have eligible players on their bench.

There are no major differences between high school and MLB substitution rules. Just like in Major League Baseball, high school managers must notify the umpire before making a substitution. Additionally, high school baseball players that have been subbed out cannot be brought into the game, just like in the big leagues. There is the possibility of exceptions surrounding these rules, but they would have to be agreed upon prior to the game or between two managers during the game. The only noteworthy difference is that high school baseball does not feature a three-batter minimum when a new pitcher enters the game.