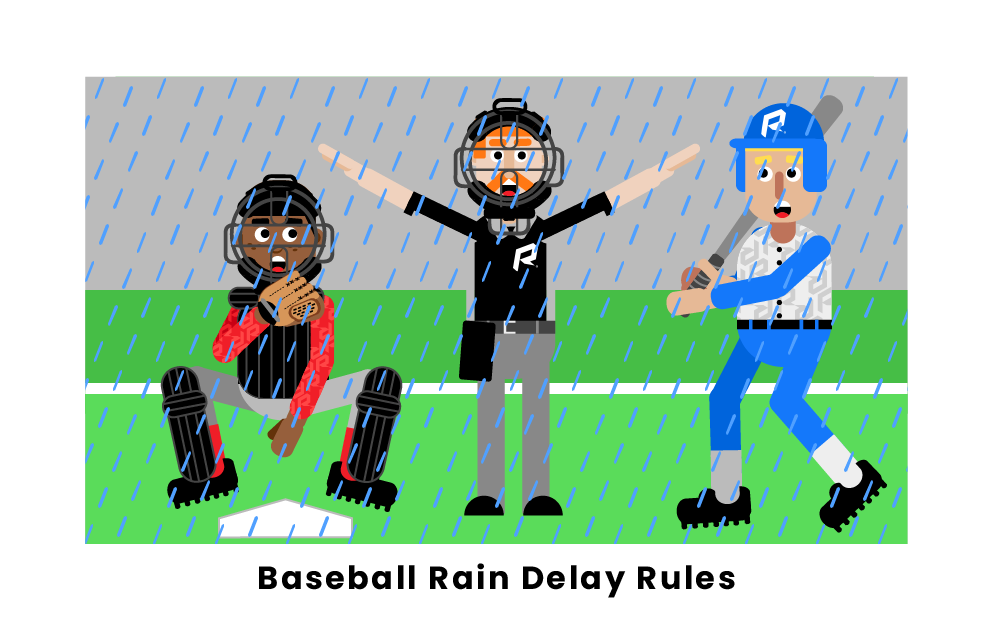 A rain delay in baseball is when a game is delayed or canceled due to inclement weather. Baseball is a sport that needs clear conditions. A wet field can be dangerous for players to run on and makes gameplay difficult. A delay can be called before a game with the start time pushed back or during the game with an indeterminate break in play.

In Major League Baseball, there is no set wait time for rain delays. Furthermore, rain delays have many nicknames both in and out of baseball and around the world. Common nicknames for rain delays include “rainout,” “washout,” and “rain stopped delay.”

In the 2020 MLB season, a new rain delay rule was introduced. An official game is recorded if the game completes the fifth inning (15 total outs per team) or if the home team is leading in the middle of the fifth inning. If rain impacts a game before it is deemed “official,” the game is suspended and will be resumed at a later date. If a game is suspended due to weather after the game is deemed “official,” the team who was leading when the game was suspended will be declared the winner. If the game was tied when it was suspended, the game will continue from the same inning at a later date.

This rule was put into place for the 2020 season on account of the COVID-19 pandemic, and has remained in place since. This rule is yet another instance in which Major League Baseball has adapted the game in recent years in response to the COVID-19 outbreak. Following the 2021 season, this system for suspending games was ratified in the CBA between the owners and Players Association and has become a permanent fixture in Major League Baseball.

Kinds of Weather Delays In Baseball

The other kinds of weather delays that can happen in baseball include lightning delays, fog delays, and snow delays.

Lightning delays are handled in a similar fashion to rain delays. There could be no rain whatsoever, but if there is lightning, a lightning delay will almost certainly be called to ensure the players’ safety.

There are a few other weather-related delays that are less common but still occur throughout the season. Fog delays are an annoyance for baseball players and fans since most of the conditions are favorable, but there is low visibility. Fog delays can last for quite some time and are usually less predictable than rain delays.

Towards the beginning of the season or end of the postseason, depending on where the team is located, snow delays can happen as well. These games are usually rescheduled if the snow is ongoing, rather than being waited out like many rain delays are. A famous instance of snow delays occurred in April 2007, when a snowstorm on opening day forced the Cleveland Indians (now renamed the Cleveland Guardians) to postpone their first series of games that season.

Difference Between Rain Delays and Rainouts

Rain delays occur quite often in baseball, but not all rain delays result in a rainout. While a rain delay is a postponement of the game for as much time as it takes for the weather to clear, a rainout is a result that effectively postpones the game until a later date. Usually, the umpires make the decision to declare a rainout after there has been over a half-hour of a rain delay. This is not a steadfast rule, as sometimes the umpires will decide to wait over an hour before declaring the game a rainout. It typically depends on whether the weather forecast looks like the rain will stop soon.

When is a baseball game considered an “official game”?

An “official game” in baseball is one where the game completes the fifth inning or reaches the middle of the fifth inning while the home team is leading. After this, the game will be final and the score will count if the game is canceled due to inclement weather. If the game is tied when it is rained out, it will be resumed from the same point at a later date.

Which MLB stadiums have retractable roofs?

How are rain delays determined?

It’s the umpire’s decision whether or not to proceed with the game, as they determine if the conditions are safe or not for the players. Many umpires will allow games to continue through light rain. The home team has some input as well, as it affects the fans coming to their baseball stadium.

How do rain delays work in baseball?

If the weather clears up, gameplay continues. If the rain persists during a rain delay, a game may end up being canceled, teams and fans go home. If this happens, then fans and attendees can use their current tickets or some kind of voucher as a rain check. A rain check is used to admit someone to the baseball park at a later date for no additional cost.

What are the kinds of weather delays in baseball?

Many people refer to a rain delay and a thunderstorm delay as two separate things, while other people use the terms interchangeably. Typically, a rain delay will only occur if it is near a downpour on the field. If there is light rain, the game usually continues as regularly scheduled. However, if there is thunder, the game is more likely to be delayed. This is typically a thunderstorm delay as thunder implies that a heavy storm, as well as lightning, will occur. Thick fog or heavy snow can also result in a weather delay.