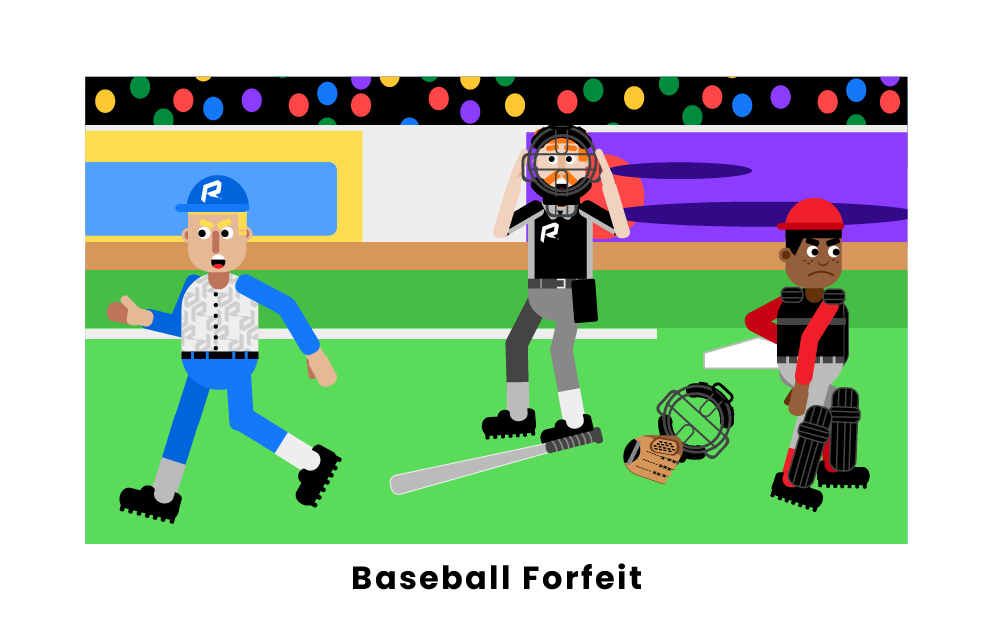 Most baseball fans will probably admit that they don’t remember the last time they saw a team forfeit a game, if they ever have. Much like in other sports, forfeits are very rare in baseball, but they can happen, and there are a number of rules related to them. Read on to learn more about forfeit rules in baseball, as well as a history and statistics related to forfeiting in baseball.

What are Forfeit Rules in Baseball?

A forfeit is when a team gives up on the current game, even if they were winning, and sacrifices the contest to their opponent. While extremely rare in baseball, having rules surrounding forfeits are important to ensure the smooth operation of a baseball game. The rules are able to prevent any unnecessary elongations of a game or any other manipulations that may give one team an advantage.

There are many ways a team can forfeit a baseball game, most of which are outlined in rule 7.03(a) of the Major League Baseball rulebook. The chief umpire is responsible for making the final decision.

Rule 7.03(a) articulates that a game will be forfeited when:

Rule 7.03(b) states that a team will forfeit a game if it does not ensure proper conditions of the field. This can pertain to covering up the infield with a tarp during a rain delay or cleaning up trash or other items that fans may have thrown onto the field.

Rule 7.03(c) declares a forfeit for any team that is unable to put nine players onto the field during the game.

Rule 7.03(d) mandates that a report of the forfeiture is sent to the President of the MLB by the umpire-in-chief within a day of the game.

Forfeited games are scored based on the number of innings that would have been played. Therefore, every MLB game would be 9-0, or one run to the winning team per regulation inning. If a college game were to be forfeited, the score would be 7-0. This rule applies to all levels of baseball.

Despite what the score reflects, all statistics of the game count for individual player contributions as long as the game has lasted the five innings needed to make it an official MLB game. In terms of pitching records, wins and losses are only awarded if the team forfeiting was losing at the time of the forfeit. If the forfeiting team was ahead, then no players are given a win or loss for the game.

Actual occurrences of forfeits in the MLB are quite rare nowadays, with the last instance being August 10, 1995, when the Dodgers lost to the Cardinals after fans threw hundreds of souvenir baseballs onto the field. The fans were protesting the ejection of two of their players and their team manager, Tommy Lasorda, who  had been kicked out by the umpires for arguing strikeout calls. The grounds crew were eventually able to clear the field, and play was set to resume, until another wave of flying balls made their way onto the field, and a forfeit was declared by umpire Bob Davidson.

Other infamous forfeits include the last ever home game for the Washington Senators, before they would become the Texas Rangers. On September 30, 1971, fans hopped the fence and began digging in the dirt and pulling up grass to stage a protest against the owner for moving the team they cherished.

On July 12, 1979, the Detroit Tigers hosted a “Disco Demolition Night” in between the games of a doubleheader against the Chicago White Sox. A DJ named Steve Dahl blew up a mound of disco records, causing an uproar from the rowdy fans that led to thirty-seven arrests after fans rushed the field causing many problems, most notably a bonfire in center field and the theft of the pitcher’s rubber.

The 1884 season holds the record for the most forfeits, with 13, while the total sum across the history of major league baseball is 139. The turning point in terms of technological advancements that decreased the number of forfeits was the installation of stadium lighting in 1935. This made it impossible for teams to purposefully delay games until it became too dark to play, ending a common form of manager protest and trickery.

Can an MLB team forfeit a game?

It is possible for an MLB team to forfeit a baseball game, although the instances of this actually occurring are quite rare. However, the MLB Rulebook lays out various scenarios in which a team may forfeit a game, including, but not limited to: not beginning the game within five minutes of the allocated start time, purposefully violating any written rules after an initial warning by an umpire, and failing to physically remove a player after his ejection from the game.

What is the score of a forfeited baseball game?

The score of a forfeited baseball game is typically either 7-0 or 9-0, depending on the number of regulation innings the two teams would have played. Therefore, in professional leagues like Major League Baseball, a forfeit is scored 9-0. However, at levels of play in which games are seven innings (such as high school baseball) a forfeit is scored 7-0. The only exception to this system is if the number of innings needed for a game to be official is already complete and the non-forfeiting team is in the lead, in which case the score remains unaltered.