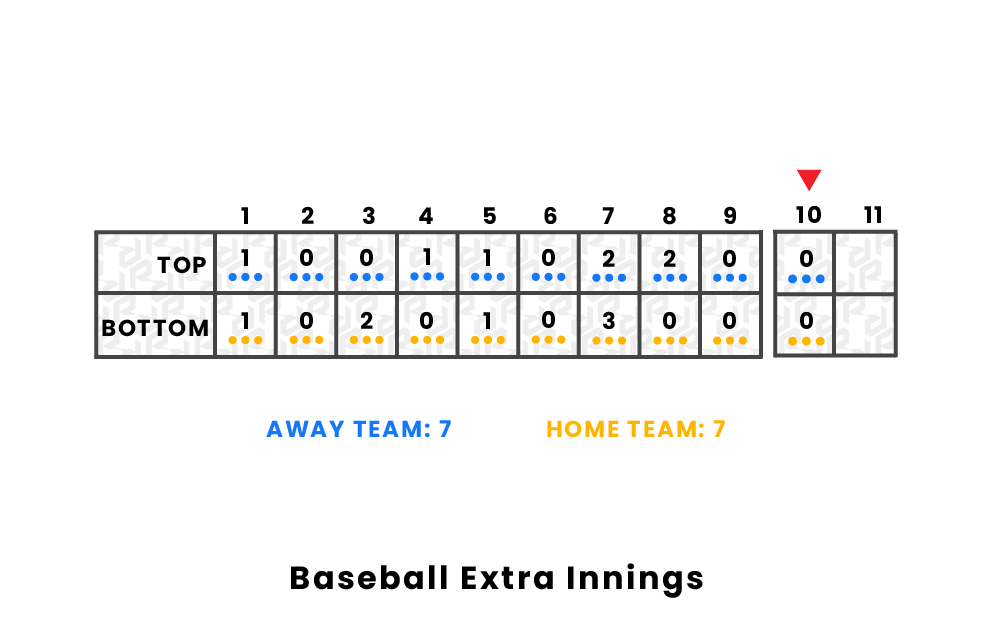 In baseball, extra innings occur when the score remains tied at the end of the ninth inning. The rules in extra innings are different throughout the various leagues and levels of competition, but the premise remains the same: determining the winner of the game.

What Are Extra Innings in Baseball?

In baseball, there is no game clock. Instead, games consist of innings with two parts, each called half-innings. The top half of each inning is where the away team bats, while the home team bats in the bottom half. Each half-inning ends when three outs are recorded by the fielding team.

If the score remains tied at the end of the ninth inning, additional innings known as “extra innings” take place. These extra innings are held in the same format as any other inning in a game of baseball, with the road team batting first and the home team batting second.

When Do Extra Innings End?

Extra innings will continue until the away team has more runs at the end of the bottom-half of an inning, or until the home team scores a game-winning run during the bottom of an inning. If the home team takes the lead in the bottom half of an extra inning, the rest of the inning does not have to be played and the game is over. Since there are no ties in baseball, there is no limit to the number of extra innings that can be played. They continue until a team can be declared the winner.

The MLB implemented a new format for extra innings during regular season games before the start of the 2020 season. Prior to this rule change, the game simply continued on into the 10th inning in the same way it did every inning before that. However, with the rule change, each half-inning now starts with a runner already on second base.

The batting team has no say in what player goes to second to start the inning; the last batter to record an out in the prior inning takes second. This is supposed to provide both teams with an equal opportunity to score runs, while also increasing the likelihood of the game ending sooner.

This change had previously been experimented with in certain minor leagues before the MLB decided to officially change their extra innings format. The new extra inning format has remained in place for the 2022 regular season. However, it remains to be seen whether this may change in future seasons.

The extra-innings rule is not in effect for the 2022 postseason playoffs. The normal extra innings rules apply for playoff games, so extra innings do not start with a runner on second base as they do in the regular season.

In 2021, the NCAA followed the MLB’s lead by establishing the same extra innings format. Each half-inning begins with a runner on second base and no outs. Similar to the MLB, the runner to begin the inning at second base is whoever made the last out batting in the previous inning.

For games during the World Baseball Classic, extra innings begin with a similar format to the previous MLB rules, with innings beginning exactly as regular innings do, with no men on base. However, if the score is tied after the 10th inning, any at-bat in the 11th inning or later will begin with runners on first base and second base. The runners on base will always be the last batters to get out during the previous at-bat. This format is designed to speed up extra innings to determine the winning team more quickly.

What was the longest baseball game ever?

The longest game in professional baseball occurred in the MiLB, and featured the Pawtucket Red Sox and the Rochester Red Wings. The game occurred on April 18, 1981, and lasted a whopping 33 innings. The Red Sox won the game 3-2. Another long game featuring the Brooklyn Robins and the Boston Braves occurred on May 20, 1920, lasting 26 innings and ending in a called game by the umpire due to weather conditions. The score was 1-1.

Are extra innings the same in baseball doubleheaders?

Yes, the extra innings rule remains the same in doubleheaders. During the COVID-19 pandemic, the MLB introduced the concept of seven-inning doubleheader games in 2020. This meant extra innings begin if the game is tied after the seventh inning, instead of going to the usual nine innings. However, this rule has since been reverted, and extra innings are the same in both standard games and double headers.

What is it called when the home team wins in extra innings?

When a home team wins in the bottom of an extra inning, you may notice the opposing team's players walking off the field while the home team’s players rush the field to celebrate. This display is what is known as a “walk-off.” Walk-offs can occur from pretty much any play, as long as it scores the go-ahead run for the home team in the ninth inning or extra innings.